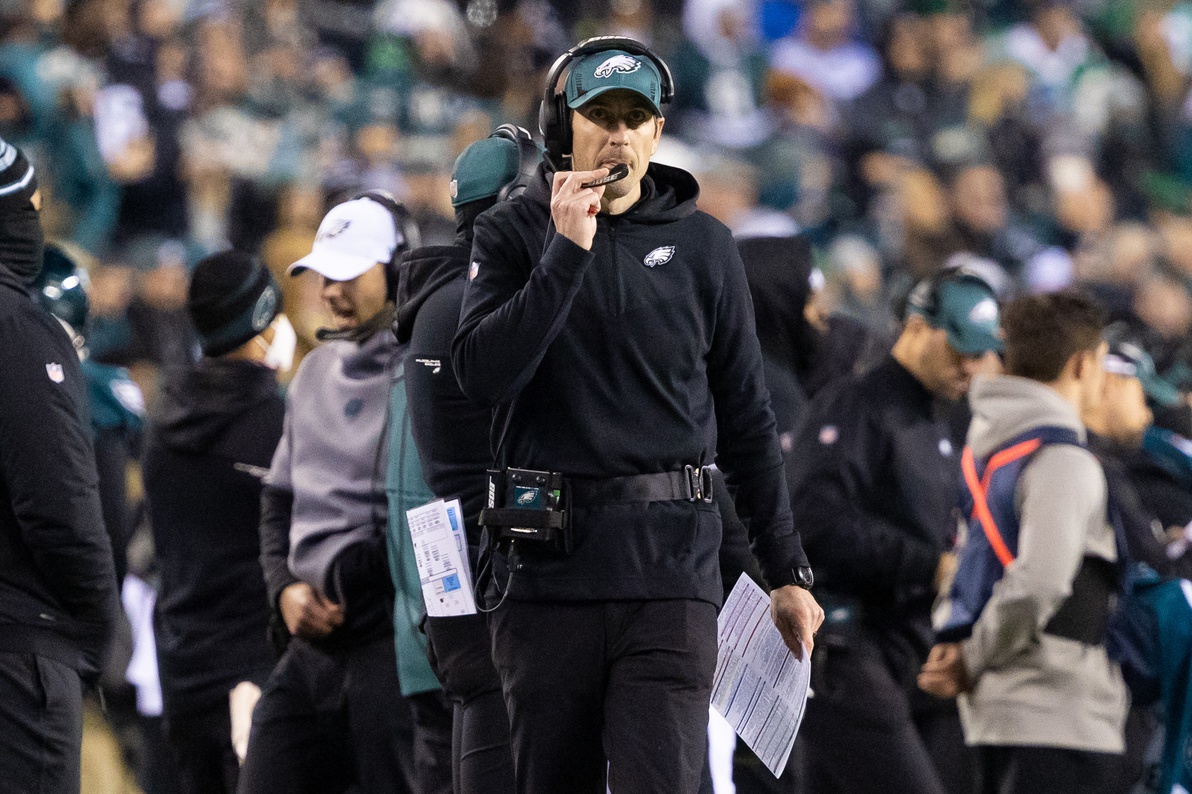 Who Is The NFL Assistant Coach of the Year?

The Associated Press announced their finalists for eight 2022 NFL awards, including Assistant Coach of the Year. The finalists were determined through the new voting system, which asks voters to rank their top three candidates. Detroit Lions offensive coordinator Ben Johnson, San Francisco 49ers defensive coordinator DeMeco Ryans, and Philadelphia Eagles offensive coordinator Shane Steichen are the three nominees for Assistant Coach of the Year. All three candidates have a decent claim to the award, but Steichen should ultimately be the winner.

The Eagles finished an NFL-best 14-3 (tied with the Kansas City Chiefs). Offensive success was at the forefront of Philadelphia’s regular-season dominance. The Eagles finished third in total yards gained per contest (389.1), ninth in passing yards per game (241.5), fifth in rushing yards per outing (147.6), and third in points scored per game (28.1). Steichen helped oversee a balanced offense that’s equally as dangerous on the ground and through the air.

Steichen especially deserves praise for the work he did with Eagles quarterback Jalen Hurts. Hurts entered the campaign on the hot seat and developed into an MVP candidate at quarterback. Hurts posted career-highs in completion percentage (66.5), passing yards (3,701), passing touchdowns (22), yards per attempt (8.0), rushing touchdowns (13), and quarterback rating (101.5). The Eagles compiled a dominant record of 14-1 with Hurts in the starting lineup. Eagles head coach Nick Sirianni and Steichen designed an offense that’s best suited to utilize Hurts’ dual-threat abilities.

Steichen spent four seasons coaching quarterbacks (2016-19) with the Los Angeles Chargers prior to joining the Eagles. Quarterback happens to be his position of expertise. There’s no denying that Hurts has taken sizable steps forward under Steichen’s tutelage.

Hurts isn’t the only offensive weapon that’s thriving in Philadelphia’s offense. Eagles general manager Howie Roseman made a blockbuster trade when he acquired superstar wide receiver A.J. Brown on 2022 NFL Draft night. Brown, who was often underutilized with the Tennessee Titans, has blossomed into a legitimate No. 1 receiver. Brown posted personal bests in receptions (88) and receiving yards (1,496) while matching a previous career-high in touchdowns (11). Sirianni and Steichen deserve credit for ensuring Brown’s transition to their offense was a flawless one.

The likes of DeVonta Smith and Dallas Goedert have also developed nicely in Philadelphia. Acquiring Brown further unlocked Smith, who posted a team-high 95 receptions and over 1,000 yards as a sophomore this season. Goedert posted a career-best 830 receiving yards.

Steichen is rightfully receiving interest around the NFL or several head coaching vacancies. The list of teams that have already interviewed, or plan to interview Steichen includes the Houston Texans, Carolina Panthers, and Indianapolis Colts. Steichen is expected to land a head coaching gig this offseason.

Steichen will coach Philadelphia’s offense in this weekend’s NFC Championship Game against the San Francisco 49ers. If the performance resembles their masterful 38-7 drubbing over the New York Giants in the divisional round, the Eagles will advance to Super Bowl LVII. Steichen should win the Associated Press’ Assistant Coach of the Year award. Steichen is then likely to become the head coach of a franchise in 2023.