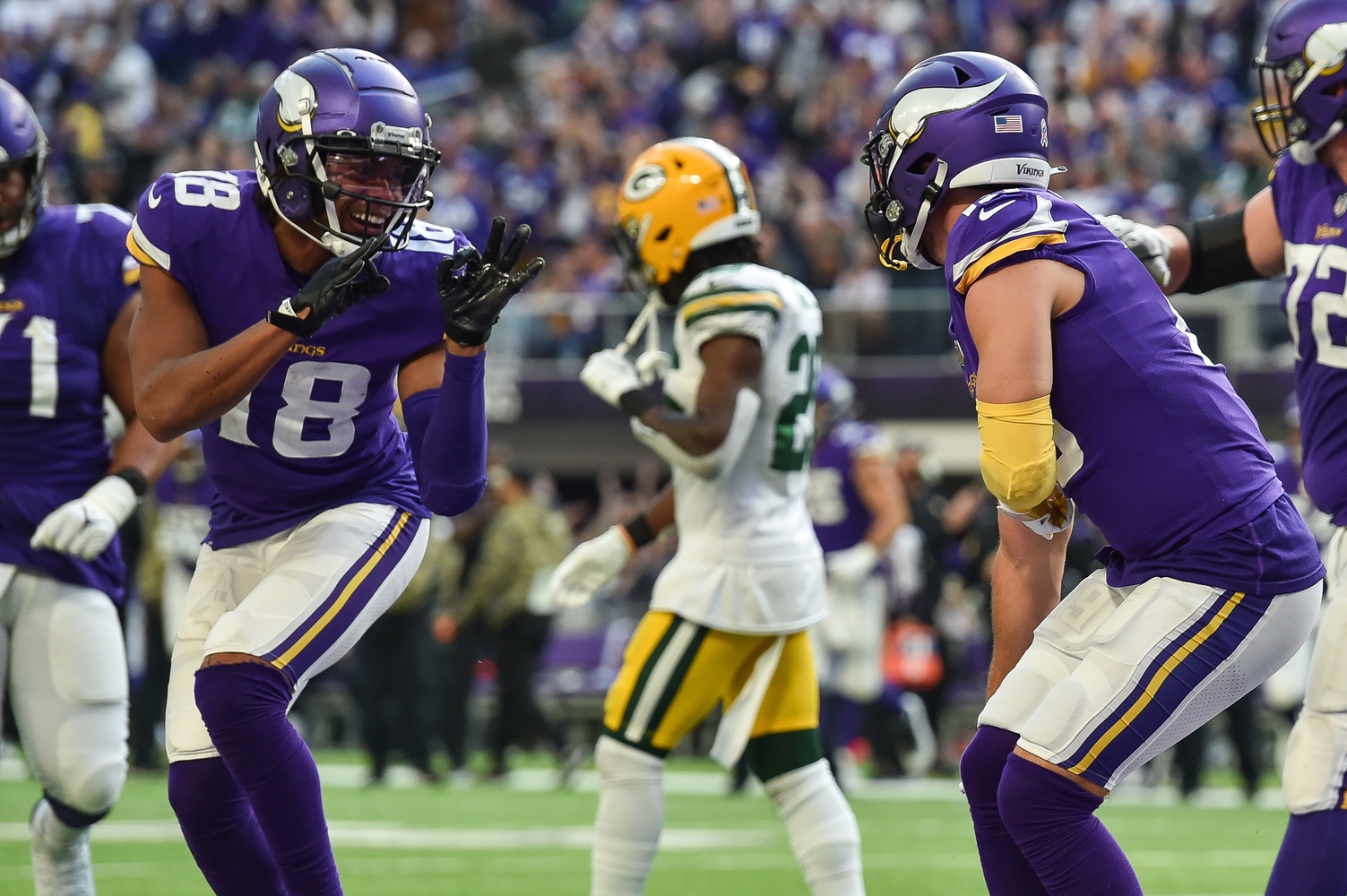 The Green Bay Packers have dominated the NFC North of late. Matt LaFleur’s Packers have captured three consecutive division titles while enjoying three straight 13-win seasons and two NFC Championship Game appearances. Green Bay’s rivals have been forced to wallow in their own misery while remaining in the shadow of the ever-dominant Packers.

This campaign could be different. A weakened Packers roster doesn’t appear as dominant and their division rivals have enjoyed more fruitful offseasons by comparison. The Minnesota Vikings are especially intriguing. Meanwhile, the Detroit Lions and Chicago Bears aren’t likely to pose a serious threat to winning the NFC North, but both franchises could field improved teams this season, particularly the Lions. The NFC North should be considerably more competitive moving forward.

In this exercise, we are analyzing the state of each roster in the NFC North while turning a blind eye to each team’s starting signal-caller. The quartet of Aaron Rodgers (GB), Kirk Cousins (MIN), Justin Fields (CHI), and Jared Goff (DET) have been cast aside as we evaluate the remaining players on offense and defense, plus the potential success of each unit and how it relates to each club’s success as a whole. From top to bottom, here is how the NFC North shakes out.

The Vikings will usher in a new era in 2022 under head coach Kevin O’Connell. A former NFL quarterback, the 37-year-old O’Connell experienced a meteoric rise through the coaching ranks while serving as Sean McVay’s offensive coordinator with the Los Angeles Rams. O’Connell is an offensive coach through and through, and he’ll be implementing an exciting scheme that should take advantage of Minnesota’s offensive weapons.

Luckily for O’Connell and Cousins, the Vikings possess an abundance of difference-makers on offense. Justin Jefferson is one of the most talented young receivers in the league, and his ascension from great to elite will continue to take center stage in 2022. The aging Adam Thielen remains a quality No. 2 WR and Dalvin Cook is one of the most productive dual-threat ball carriers in the league. The Vikings possess the horses necessary to make O’Connell’s offense click from the get-go.

Defensively, O’Connell hired Ed Donatell to be his defensive coordinator. Donatell has been one of Vic Fangio’s most trusted disciples while enjoying a coaching career that has already spanned more than four decades. It was critical for the young-and-inexperienced O’Connell to hit a home run with his defensive coordinator hire, and he did just that by appointing Donatell.

Donatell will be overseeing a defense that experienced quite the overhaul this offseason. Za’Darius Smith was signed away from their rival Packers (following his release). Smith is expected to form a fearsome pass-rushing duo alongside the returning Danielle Hunter. Harrison Phillips was signed to beef up the interior of the defensive line. Three draft selections in the secondary (Lewis Cine, Andrew Booth Jr., and Akayleb Evans) hope to spearhead a new-look group alongside Patrick Peterson.

Vikings fans have plenty of reason for optimism in 2022.

The aforementioned Packers fall behind the Vikings, largely due to this scenario’s emphasis to remove the quarterback from the evaluation.

Thankfully, the rest of the offense features fewer questions and leans favorably toward steadier performances. Aaron Jones is an elite running back that may be featured in LaFleur’s passing attack (out of necessity) more consistently going forward. A.J. Dillon is one of the better backup running backs across the league. A return to health for David Bakhtiari and Elgton Jenkins should allow the Packers to field an above-average offensive line.

Gutekunst surprisingly used both of his first-round selections on the defensive side of the ball, drafting a pair of Georgia defenders in Quay Walker and Devonte Wyatt. Walker and Wyatt join a solid front seven that already features Kenny Clark and Rashan Gary. Re-signing De’Vondre Campbell was critical to the continued success of the linebackers corps. A healthy Jaire Alexander should reclaim his place as one of the league’s best cornerbacks, and he’ll be opposite an underrated young cover-man in Eric Stokes. The Packers could field a top-10 defense.

The Lions went 3-13-1 last season and general manager Brad Holmes knew he had to enjoy an aggressive offseason in hopes of turning his struggling Lions around. The Lions fielded one of the league’s worst receiving corps last season and that’s where Holmes spent the majority of his attention this offseason.

D.J. Chark was signed in free agency before Holmes pulled a stunning draft-day trade in order to move up 20 spots and select former Alabama standout Jameson Williams. An elite prospect that tore his ACL in the National Championship Game, Williams is going to make a sizable impact on Detroit’s passing offense whenever he returns to the field.

The Lions should be excited about the remaining of their offensive cast. Williams and Chark join a wide receiver room that also features Amon-Ra St. Brown, Kalif Raymond, Quintez Cephus, and Josh Reynolds. D’Andre Swift is an exciting dual-threat running back with sky-high potential. T.J. Hockenson is a top-10 tight end when healthy and available. Detroit’s offensive line should take another step forward with players such as Penei Sewell showcasing improvement in 2022.

Questions still remain for a defense that’s counting on improvement from young players such as Alim McNeill and Levi Onwuzurike. The 2022 season may qualify as a now-or-never campaign for former No. 3 overall selection Jeff Okudah. Rookie pass rusher Aidan Hutchinson should help the Lions apply more pressure on opposing quarterbacks. The Lions’ defense remains a unit in transition.

The presence of Fields at quarterback will keep the Bears faithful excited for the 2022 campaign, but new general manager Ryan Poles has failed to surround Fields with adequate talent this offseason. The offseason departure of Allen Robinson has left the Bears without a reliable receiver outside of Darnell Mooney. Mooney will likely be a target hog, as Fields is unlikely to showcase much enthusiasm targeting the likes of Byron Pringle, Tajae Sharpe, Dante Pettis, Velus Jones Jr., N’Keal Harry, and Equanimeous St. Brown That’s not exactly a murderer’s row of pass catchers.

The state of the offensive line may somehow be even more concerning than the pass-catching options. Few rookie blockers suffered through a more disappointing debut season than Teven Jenkins did. The former Oklahoma State product struggled through a back injury. When Jenkins finally made a late-season debut, he didn’t look like he was quite prepared for NFL action. The Bears will hope an offseason to recuperate and continue honing his craft served Jenkins well. Concerning questions on the interior of the offensive line are also present.

New head coach Matt Eberflus is a defensive-minded leader. The Bears acted accordingly, adding a ton of young talent to that side of the ball via the NFL draft and free agency. General manager Poles somewhat surprisingly utilized his first two selections on defensive backs via safety Jaquan Brisker and cornerback Kyler Gordon. Former Tennessee Titans safety Dane Cruikshank is a sneaky breakout candidate. Sack-artist Khalil Mack was traded, and the Bears may struggle to apply consistent pressure on opposing quarterbacks in his absence. Roquan Smith, Eddie Jackson, and Jaylon Johnson are high-level players. The Bears will be better defensively than offensively, but they likely won’t win many games overall.