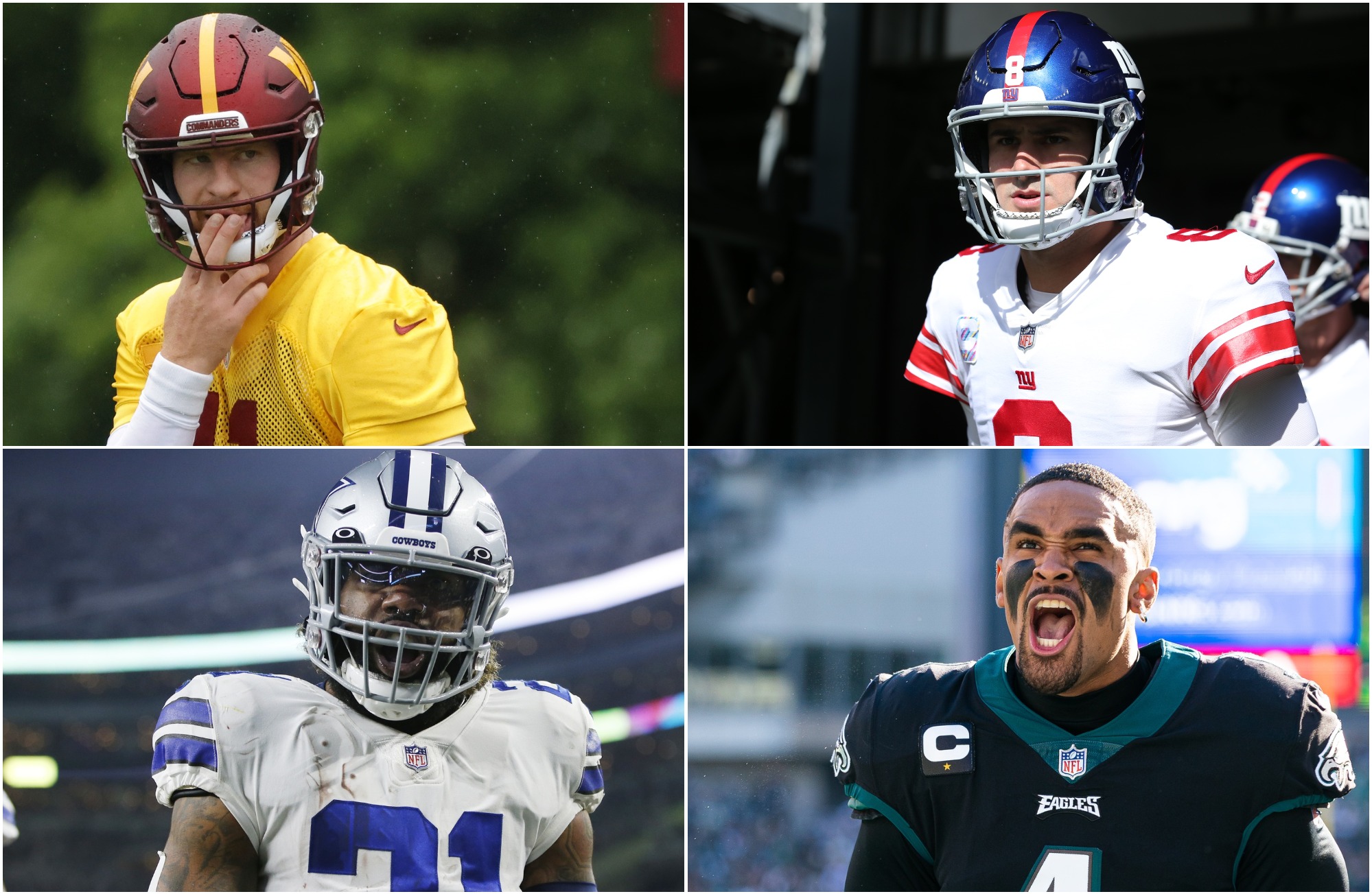 Which Player Has Most to Prove in NFC East?

Heading into the 2022 season, the NFC East has a few guys—one from each team—that have the most to prove across the NFL. That’s quarterbacks Carson Wentz, Jalen Hurts, and Daniel Jones as well as running back Ezekiel Elliott. Of those players, it’s Wentz who has the most pressure to perform in 2022.

That isn’t to say that this season isn’t incredibly important for any of the other players. Each one of them stands to lose—or gain—plenty depending on how they perform this year.

The obvious pick to point out is Jones. For essentially his whole career, the Giants have been trying to determine whether Jones can be their next franchise quarterback. Despite three straight losing seasons to begin his career and some troubling play, there have been enough flashes of talent and confounding variables to still be uncertain. That’s why New York has done everything it can over the last few years to be sure Jones doesn’t have excuses for failure in 2022.

He’ll have a much better offensive line in front of him, a stronger receiving corps, an offensive-minded head coach who previously worked with Josh Allen in Buffalo, and an offensive coordinator specializing in the passing game and working with Mahomes in Kansas City. As an even further incentive, Jones will be playing on the last year of his rookie contract after the Giants didn’t exercise his fifth-year option. Either he puts it all together this season and earns a contract extension or he doesn’t and will have to look to extend his career elsewhere.

The 2022 season is definitely a make-or-break one for Jones. Though even if he struggles and doesn’t get an extension, he could quickly find a home as a backup for another franchise before getting another starting job somewhere else à la Mitchell Trubisky.

Philadelphia’s starting quarterback also has a big season ahead of him. Hurts is entering his third season with the Eagles—and second full year as their starter under center. After making strides as a passer in year two, Hurts could set himself up for a contract extension that would keep him in Philadelphia for a while with another season of improvement in 2022.

Since he wasn’t a first-round pick, he doesn’t have the ability to play on a fifth-year option, so playing well enough to earn an extension will be a big goal for Hurts this season. Still, Hurts has more breathing room than Jones with his fourth year on his rookie contract still remaining. He still has a couple of years to show he’s developed as a passer.

Even if he doesn’t, the Eagles may keep him around anyway. They’ve already proven they can be successful with Hurts. Philadelphia made the playoffs last season by leaning on their run game and setting up play-action for their quarterback. So while Hurts could prove a lot this season if he continues to improve as a passer, he doesn’t seem to be in a position to lose a lot this season barring a significant step backward.

Someone who does stand to lose not only significant playing time but a lot of money is Elliott. Even after a 1,000-yard season in 2021, he’s continued to look like a different running back from who he was at the start of his career.

Elliott has played worse each season since signing his megadeal extension in 2019. At this point, he may not even be the best running back on the Cowboys’ roster. Tony Pollard has looked more explosive out of the backfield and even has shown off his skills as a pass-catcher, something that hasn’t been one of Elliott’s biggest tools.

In 2022, Elliott needs to show a return to form to avoid losing the lead back role to Pollard. Playing like he did in the “Feed Zeke” days would make him a crucial part of the Cowboys’ offense once again. That could be especially important for a year in which the NFC East could be more contentious.

A strong season would also make the idea of moving on from his contract in 2023 a harder decision for Dallas. If they decide to keep him in town, Elliott would get to see a lot more of the $90 million his contract was originally worth.

Clearly, each of those three players has a lot to prove this year. But it’s still Wentz who really needs the biggest 2022 season because of where he is in his career relative to the others in the NFC East.

Jones and Hurts could each end up losing their jobs as starting quarterbacks for their current teams eventually. Jones may even lose it as early as next year. But they’re both still young and will get the chance for a change of scenery to re-establish themselves as starters before they pass their prime.

Wentz, on the other hand, will be 30 by the time the 2022 season is over. He’s already on his third team in seven seasons and his second go-around trying to find success with a change of scenery. It didn’t work out well in Indianapolis, where his declining play in the back half of the 2021 season was a big reason the Colts missed the playoffs in heartbreaking fashion.

With a potential out on his contract that would leave the Commanders with $0 in dead cap after the 2022 season, a season of poor performance in Washington could easily leave Wentz out of a job and without many prospects of finding a new one. Unlike Elliott, who will still be only 27 next year and still has a good chance of being a starting back somewhere, if not Dallas, in 2023, a 30-year-old Wentz wouldn’t be seen as a viable starter if he couldn’t stick with Washington.

That means that in 2022, Wentz isn’t only playing for his job in Washington, he’s playing to prove he’s still a worthy NFL starter. If he doesn’t play well this season, he’ll probably be relegated to a backup role for the rest of his career. Given that he has the most to lose of any other offensive starter in the NFC East, it’s Wentz who has the most to prove in 2022.