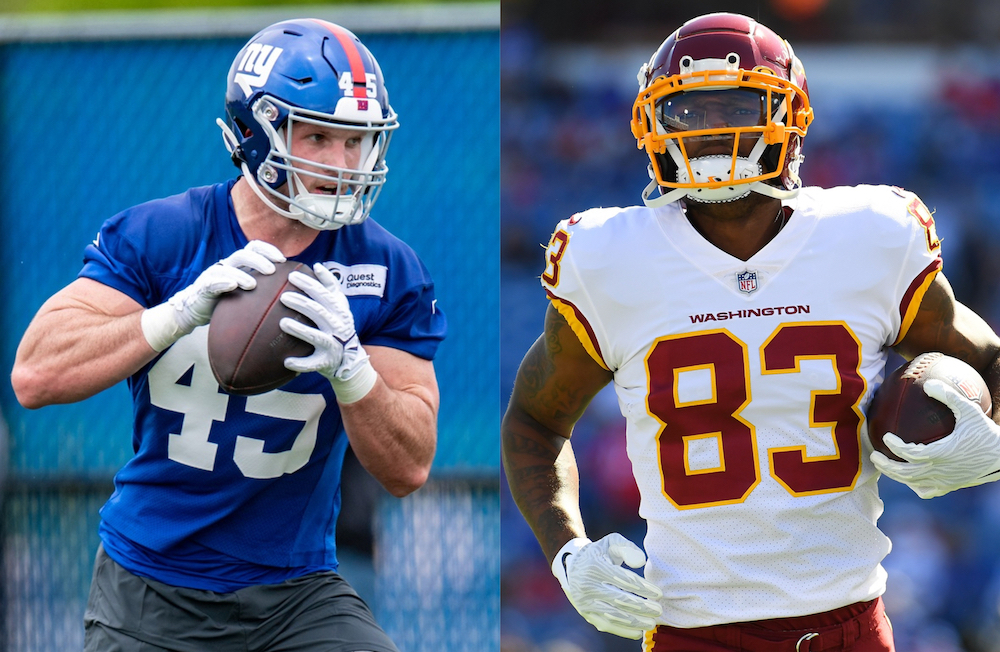 Who Will Be Giants’ TE1 This Season?

A positional group as up in the air as any, the New York Giants and newly-minted head coach Brian Daboll have found themselves in a sticky situation surrounding the tight ends room. Following the departure of Evan Engram this offseason, a tandem of talents remain hip to hip as training camp gets underway.

A position of utmost importance, and one in which the Giants tend to feature in the passing game, New York has an enticing group of athletes to work with as the regular season rapidly approaches. Who will end up being the Giants’ TE1?

A fourth-rounder out of San Diego State, although Bellinger was placed on PUP before the start of camp, his short stint ended as he was activated before the start of Wednesday’s practice. New York’s top tight end during spring workouts, while Bellinger presents a drastically different skill set than the other names on this list, he was arguably the top in-line blocker in the 2022 draft class and should work into a hefty amount of snaps in his first pro campaign. He has a ways to go before we ever denounce him as a legitimate target through the air, but with reinforcements coming up front in the form of Evan Neal, Jon Feliciano, and Mark Glowinski, the Giants could be bolstering up the trenches—and further out—for Saquon Barkley to return to form.

Bellinger is the favorite to win the job as we sit in mid-July.

There’s no way around it, if the Giants want Daniel Jones to sling the rock around the yard, Seals-Jones should be peppered with targets early and often this fall. Although he hasn’t enjoyed a breakout season yet, he still is just 27 years old and has a ton of traits to like as a perimeter weapon.

One of my favorite signings so far in FA has flown under the radar in Ricky Seals-Jones ➡️ Giants.

Excellent hands, sneaky athleticism, and will receive a ton of looks as TE1 in the intermediate areas of the offense. pic.twitter.com/4XFKHd1Cez

After taking over in Washington for an injured Logan Thomas, Seals-Jones recorded 30 receptions for 271 yards and two touchdowns in six starts. He isn’t the most dynamic athlete over the intermediate areas of the offense and he won’t give anyone flashbacks of Engram, but he’s experienced, athletic, and could—if anything—present a security blanket for Jones over the middle of the field.

A late start in the NFL (drafted at 26 years old) has hampered Akins’ production as he’s never become a true top flex option within a pro offense. In four seasons with the Houston Texans, Akins totaled 1,260 yards and three touchdowns and now enters the fold in New York as a veteran whose value inside the locker room could be more important than his impact on Sundays.

After signing a one-year deal worth a tick over a million bucks, an injury to one of the aforementioned names above looks to be his pathway to snaps. With multiple years of experience under his belt, things could be much worse as an emergency option.

It’s also worth mentioning the team hosted Ebron for a workout—among other veterans—on Monday. After a down year in 2021, Ebron is still only 29 years old, has more than 3,800 yards to his name, and could immediately jump into the top tight end spot if Daboll seems fit.

A sure-handed target with more than 4,200 NFL snaps under his belt, Ebron could be a nice addition for Jones, who has to take a massive step forward under center this fall. Don’t be surprised if Giants General Manager Joe Schoen adds Ebron during the dog days of camp.