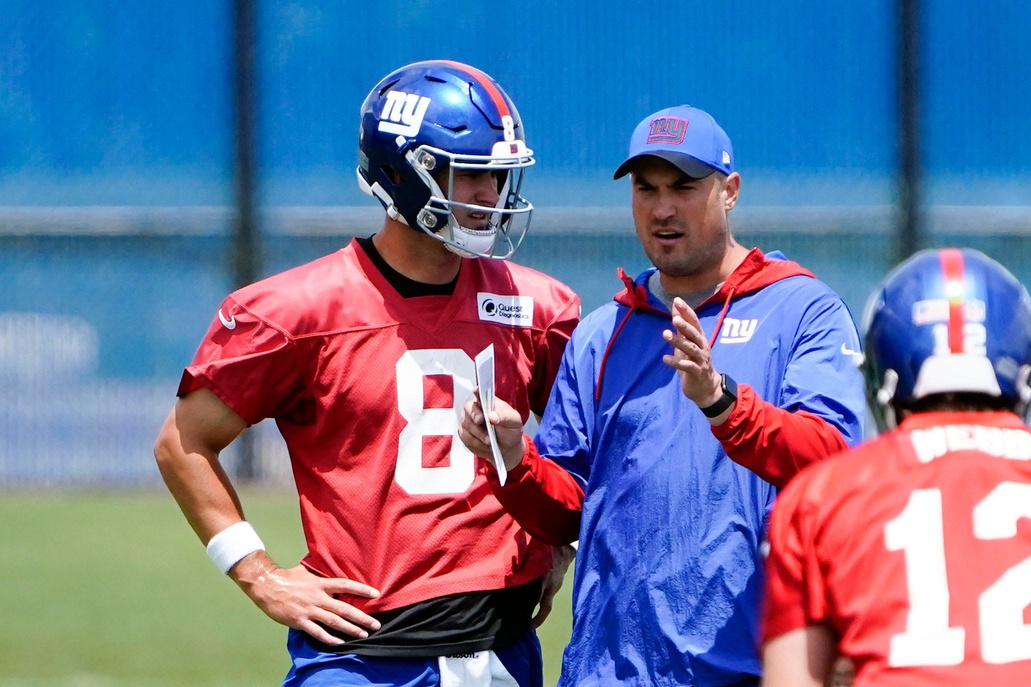 What Will Make 2022 Season A Success For Giants?

In a division featuring two teams that made the postseason in 2021 and a Washington team that made a big change at quarterback, the New York Giants won’t be making the playoffs in 2022. But that should not be the standard we use to determine whether the 2022 season is a successful one for them. Instead, that falls more on whether they see stronger performances from their quarterback and other young players.

As is the case with any rebuilding team like the Giants, the most important part of the process is seeing movement in the right direction. The Giants have not won a postseason game since their Super Bowl XLVI victory over the New England Patriots in 2011. They haven’t made the playoffs or even had a winning season since 2016. The team has gone 33-64 and is now on their fourth head coach in the half a decade since. So for New York especially, taking a step forward in this rebuilding period that hasn’t moved forward any more than a hamster in its wheel would be a huge success.

A big part of finding their footing and moving in the right direction is finally locking down their starting quarterback situation. The Giants have made it abundantly clear that this year is the make-or-break season for quarterback Daniel Jones. Whether it’s been injuries, poor offensive line play, or a lack of good weapons around him, Jones has had a lot of excuses for his lack of success since he was drafted in 2019.

Heading into 2022, Jones has an upgraded offensive line, some extra weapons, and a new coaching staff that’s putting a lot of their trust in his abilities. Jones is entering this season in the best situation he’s ever been in since being with the team. Given the flashes of talent he’s shown, that could mean he proves himself worthy of a contract extension and finally gives the Giants confidence in their starting quarterback.

A step forward for Jones could mean a lot of things, especially considering the low bar he’s set for himself through three seasons.

For a good first step, the young quarterback could try to stay on the field for a full season, something he’s been unable to accomplish with the injury bug that’s come for him every year. Jones has missed 10 games with injuries since being named the starter, including six games to end the 2021 season after injuring his neck.

Staying on the field alone won’t solve all of Jones’ issues, namely his tendency to turn the ball over. In just 37 career starts, Jones has amassed a whopping 49 turnovers—29 interceptions and 20 lost fumbles. Cutting down on turnovers while not being afraid to air it out is exactly what new head coach Brian Daboll has been working on with Jones so far this offseason. It’s obviously easier said than done, but the improved situation around Jones should help him out in that regard.

Other successes this season come down to the improvements in the individual performances of other young players and strong initial showings from the rookies. Again, success for the Giants this season isn’t about making the playoffs or even their record—though an improvement on a 4-13 season wouldn’t hurt—but rather about seeing a light at the end of a long rebuilding period.

Three players on the offensive side who could help them along the right path are receivers Kenny Golladay and Kadarius Toney as well as running back Saquon Barkley. Golladay was the Giants’ big splash addition last offseason, but his extreme fall-off in production after coming to New York left much to be desired. Toney showed immense potential in a small sample size but still finished his rookie season without a score. Barkley just didn’t look like the same player he was his first two seasons last year as he returned from the ACL tear he suffered in 2020.

Golladay and Toney could both see improvements in their production if Jones also improves. Barkley may be in line for a better season as well with a full, post-injury season under his belt that has potentially restored his confidence in his legs. Steps forward from all three—plus Jones—would no doubt mean a massive leap in the right direction for New York.

There’s plenty of young promise on the Giants’ defense as well for the 2022 season. Edge rusher Azeez Ojulari, a rookie in 2021, could use his eight sacks in his first season as a strong foundation to build on going into his second. Safety Xavier McKinney could build off an impressive season of ball production after his five interceptions and 10 pass defenses. Defensive linemen Dexter Lawrence and Leonard Williams are coming off of solid performances in the trenches as well.

Then, of course, there are the rookies, several of whom the Giants hope to be immediate contributors. Edge rusher Kayvon Thibodeaux and offensive tackle Evan Neal highlighted New York’s draft class as their two top-10 selections, but guard Josh Ezeudu, cornerback Cordale Flott, and receiver Wan’Dale Robinson could all also make themselves known by season’s end.

Finally, there’s all the hope that comes with the new coaching staff. The aforementioned Daboll brings his offensive-minded approach with him to the Giants’ head coaching position along with offensive coordinator Mike Kafka and defensive coordinator Don “Wink” Martindale.

Daboll and Kafka worked with Josh Allen and Patrick Mahomes, respectively, in their previous jobs and will try to unlock all of Jones’ potential as a mobile passer. Martindale is well known for his aggressive defensive play-calling with a tendency to blitz often. With Thibodeaux on one side of the D-line, Ojulari on the other, and Williams and Lawrence anchoring the interior, New York’s front seven could look especially scary in Martindale’s defense.

Though they’re not quite in a position to contend for the playoffs in 2022, there’s a lot for the Giants to be optimistic about as they head into next season. Seeing steps forward from several of the young players on both sides of the football would make the coming season a big success for New York, even if it doesn’t immediately mean more wins.