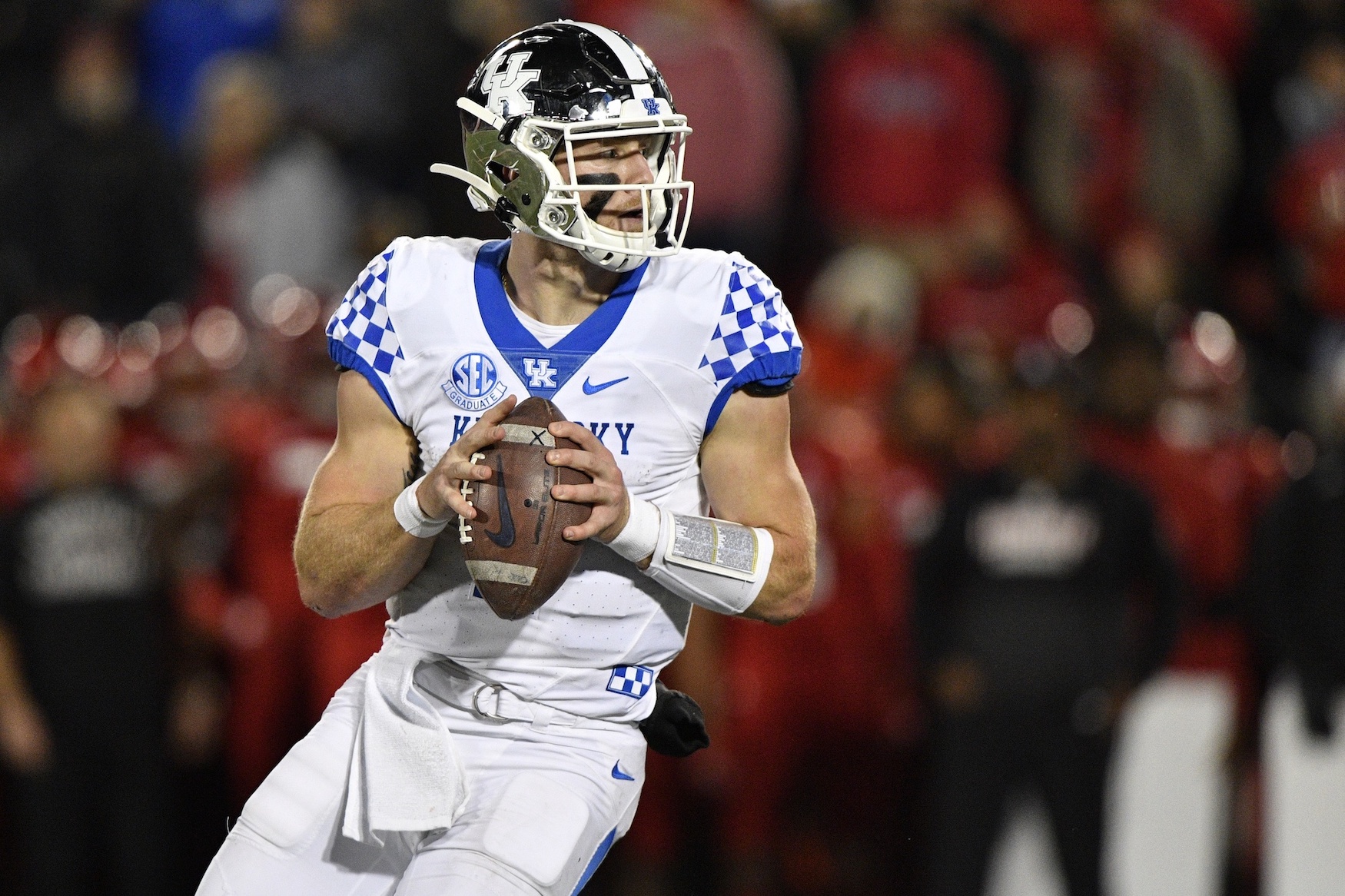 Why New York Giants Should Already Be Eyeing Will Levis

Though the New York Giants are still technically waiting for the end of this year to get their final answer on whether Daniel Jones can be their franchise quarterback, there shouldn’t be anything stopping them from keeping an eye on the quarterbacks in the 2023 NFL Draft class. One player they should be eyeing in particular is Kentucky quarterback Will Levis.

If you’ve heard it once, you’ve heard it a thousand times: this year’s Giants roster leaves Jones with no excuses to disappoint. He’s got a new coaching staff doing all they can to get the most out of his talent and find ways for him to succeed. He’s also got a supportive new general manager that has provided some big help on the offensive line this offseason and a solid lineup of skill players around him.

But early word out of training camp suggests that Jones is not off to a good start in that regard. Pat Leonard of the New York Daily News reported that “it’s no stretch” to say that backup quarterback Tyrod Taylor has a shot at winning the starting job over Jones. Jones’ slow start to camp has also brought extra attention to the rumors that the Giants are potential trade partners with the 49ers for veteran quarterback Jimmy Garoppolo.

New York was likely already looking into what life would look like without Jones under center after declining his fifth-year option, and now things have only gotten more uncertain in New York’s quarterback room. Garoppolo and Taylor are two veteran possibilities, but neither should be a long-term answer. Garoppolo will be a free agent at the end of the 2022 season, and Taylor, who turns 33 this week, isn’t the right fit for a young, rebuilding team. Barring a surprising trade, the solution is likely going to come down to taking a quarterback in next year’s draft.

If that’s the plan, and assuming the Giants have a bad enough season to have their pick of the litter, then why is Levis the guy they should be looking at? Ohio State quarterback C.J. Stroud and Alabama quarterback Bryce Young are the much more popular names from bigger programs, and each of them had more wins last year than Levis did. Per BetOnline, Stroud (+200) and Young (+250) also both have significantly higher odds to be the first overall pick in the 2023 NFL Draft than Levis, who is not even ahead of fellow draft-eligible quarterbacks Phil Jurkovec and Spencer Rattler. So again, why Levis?

Well, after some #grindingthetape (shout out to our own Kyle Crabbs), I found a lot to like about Levis’ game, and particularly how it could fit into head coach Brian Daboll’s offense.

From a traits standpoint, Levis stands above both Young and Stroud in several aspects (and literally, in terms of height). Young is more poised and better at processing what’s in front of him and progressing through reads. Stroud has better touch. But in most other categories, it’s the Kentucky quarterback who has the edge.

Levis has a bigger frame with tons of athleticism and mechanics that are both clean and deliberate. Where Stroud has some issues with footwork in the pocket and Young can have trouble seeing over his linemen thanks to his smaller frame, Levis has no such issues. He’s got pristine footwork off of the mesh in play-action and in standard dropbacks, all followed up with a quick release that’s complemented by his impressive arm strength to make great throws. Delayed throws due to hitching or poor timing on Levis’ part are rare. More likely than not, if a play broke down for Kentucky’s offense last year it was because of bad blocking up front or a lack of talent outside of (current Giants receiver) Wan’Dale Robinson in the receiving corps.

Oh yeah, and Levis can run too. He’s not on the level of Lamar Jackson obviously, but Kentucky had success allowing Levis to use his legs on QB powers, options, and more. With his big frame and mobility, there’s no reason to think he can’t make the kinds of plays Justin Herbert or even Josh Allen do with their legs at the NFL level.

Levis isn’t a perfect prospect by any means, as he still could improve his touch on deeper throws and his ability to work through his progressions. There were several instances last year where the Kentucky quarterback would lock onto his No. 1 read when a play started and they often led to incompletions and interceptions.

Still, he was just a first-year starter last season and there was already so much to love about his NFL-ready traits. It’s exciting to think about how he might look after another year of development at the collegiate level.

The Giants desperately need to find a new franchise quarterback. They’ve been floundering without lots of success under center since the later years of Eli Manning. Jones hasn’t seemed to be the solution they hoped for, and they can’t hope to leave the rebuilding phase without an upgrade at signal-caller.

Though Young and Stroud might be the “sexy” names now, Levis’ traits—a strong arm, clean mechanics, and impressive mobility in a big frame—have to be intriguing to the Giants, especially with Daboll manning the sidelines after finding plenty of success with a quarterback with similar traits in Allen. The icing on the cake: Robinson, Levis’ top collegiate receiver, is already with the team. That’s been working well for some other teams around the league.

While the Giants still have many questions about their future at quarterback, Levis could be the answer to many of them. New York should already be keeping tabs on him as their potential next guy.