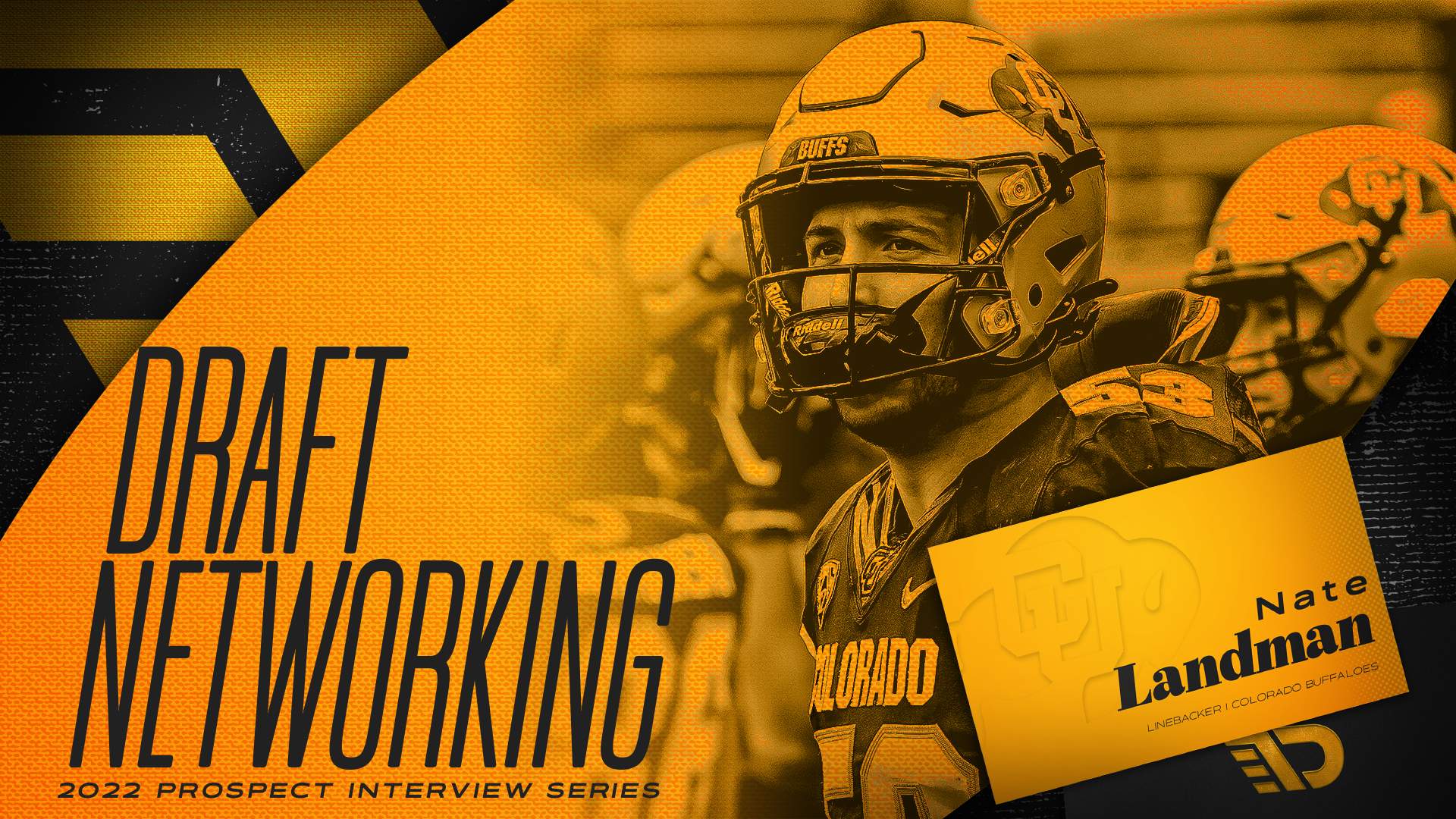 Colorado’s Nate Landman departs the program as one of the most successful defenders in Buffaloes history. In five illustrious seasons, Landman was a mainstay that recorded a staggering 347 total tackles, 42.0 tackles for loss, 10.0 sacks, 11 pass breakups, and three interceptions. Landman’s ability to diagnose run plays and take excellent angles to the football makes him a pro-ready prospect.

Landman recently spoke exclusively with The Draft Network regarding his five-year career at Colorado, the pre-draft process, how he sees himself fitting in at the next level, why an NFL franchise should use one of their draft picks on him, and so much more.

JM: You were actually born in Africa while your father was enjoying a playing career in Rugby. You moved to America at a fairly young age, but what does Africa mean to you?

NL: It means a lot to me. I was actually just talking about that with my parents earlier today. I remember doing school project reports on the heritage of Africa during middle school and high school. It’s something we’re all super proud of. I actually tried to hold onto my African dual citizenship when I became a U.S. citizen but I unfortunately lost it.

JM: You’re one of the most decorated defenders in Colorado history. You leave the program with nearly 350 tackles to your name. How do you look back on your collegiate career?

NL: It was honestly the greatest experience of my life. I fell in love with Colorado and football more and more each year. I had a lot of amazing coaches. My entire experience was extremely positive. So many people at Colorado influenced me to be the person I am today. I had the greatest teammates. Playing for CU was truly something special.

If I had the chance to go back and do it all over again, I would do it the exact same way. I would choose CU all over again. They helped me accomplish so much throughout my time there. Colorado is the reason I’m the player I am today. It was an experience I wouldn’t trade for anything in the world.

JM: We love to hear that and we’re so glad you had such a positive experience at Colorado. What’s your favorite aspect of playing the linebacker position?

NL: It’s tough to choose just one. There are so many. I think it’s the best position anybody can play in all of professional sports. We get to do a little bit of everything. I love every aspect of it. I love the communication and leadership aspects that come with playing the position. There’s so much involvement.

We’re essentially the quarterbacks of the defense. When the defense is waiting for a play to happen, everybody looks to that middle linebacker. We’re essentially involved in every play. Last but not least, I would point out the physicality. It’s one of those positions where you have to come downhill and hit somebody in the mouth. We also get to play in coverage and hit guys coming across the middle.

It’s a position that allows me to do everything. I feel like I was born to play the position.

JM: You’re a selfless player. On tape, we see a smart linebacker prospect that has a high-level understanding of how to effectively stop the run. What are some things you look for pre-snap?

NL: Gosh, there’s so much I look for. First of all, you’re looking for the alignment. Are they 2×2 or 3×1? What position is where? I pay close attention to where the tight ends are located. Is he in-line or off the ball? Once you have all of that down pact, you start looking at where your defense is, where you’re rolling down and where your soft spots are. I look for where we’re loaded up so you can try to get a clue of where they may be looking to run the ball.

You also look at the positioning of the offensive linemen and their body language. Where are their hands lined up? Is one of their feet behind the other one? Is one of them off the ball a bit more than the rest? I even look at the alignment of the running back. Is he even with the quarterback, or is he behind them? All of those things can be super useful indicators to scope out the potential outcomes of the play before the ball is even snapped.

JM: Your football I.Q. really pops on film. You’re obviously a student of the game. Sometimes, the fastest route for a rookie to get on the field is to play special teams, especially as a linebacker. How comfortable are you playing special teams, and what previous experience do you have doing it?

NL: I’m super comfortable playing special teams. That’s actually how I first earned playing time at Colorado back as a true freshman. I blocked a punt against USC in my freshman season and I began earning more defensive snaps from there on out. I was told from a young age that special teams is the fastest route to getting on the field and I believe that to still be accurate. I played on all four special teams phases during that freshman season. I was on every single one of them.

When I started playing 60-70 snaps per game at middle linebacker, my duties on special teams lessened, but I was still playing on punt units. I was happy to help out wherever I could. During practice and camps throughout my five seasons at Colorado, I participated a ton in special teams drills. I enjoyed fine-tuning that craft because I knew I might play a bigger role there someday. I always knew that if I got my shot in the league, my immediate impact would come via special teams.

JM: The importance of playing special teams clearly isn’t lost on you. I’ve really appreciated your time today. Why should a team use one of their draft picks on Nate Landman?

NL: I think I’m going to bring that X-factor with me to the next level. I’m a leader in the locker room. I’ve always been a great teammate. I’m going to bring a lot to an organization. I’m excited to contribute on the football field.

I’m a football player at the end of the day. I’ve played the game at a high level for several seasons now. I have those instincts you simply can’t teach. I have a superpower as a run stopper. I do it better than anyone else in this draft class. Any team would be lucky to have me on their roster.