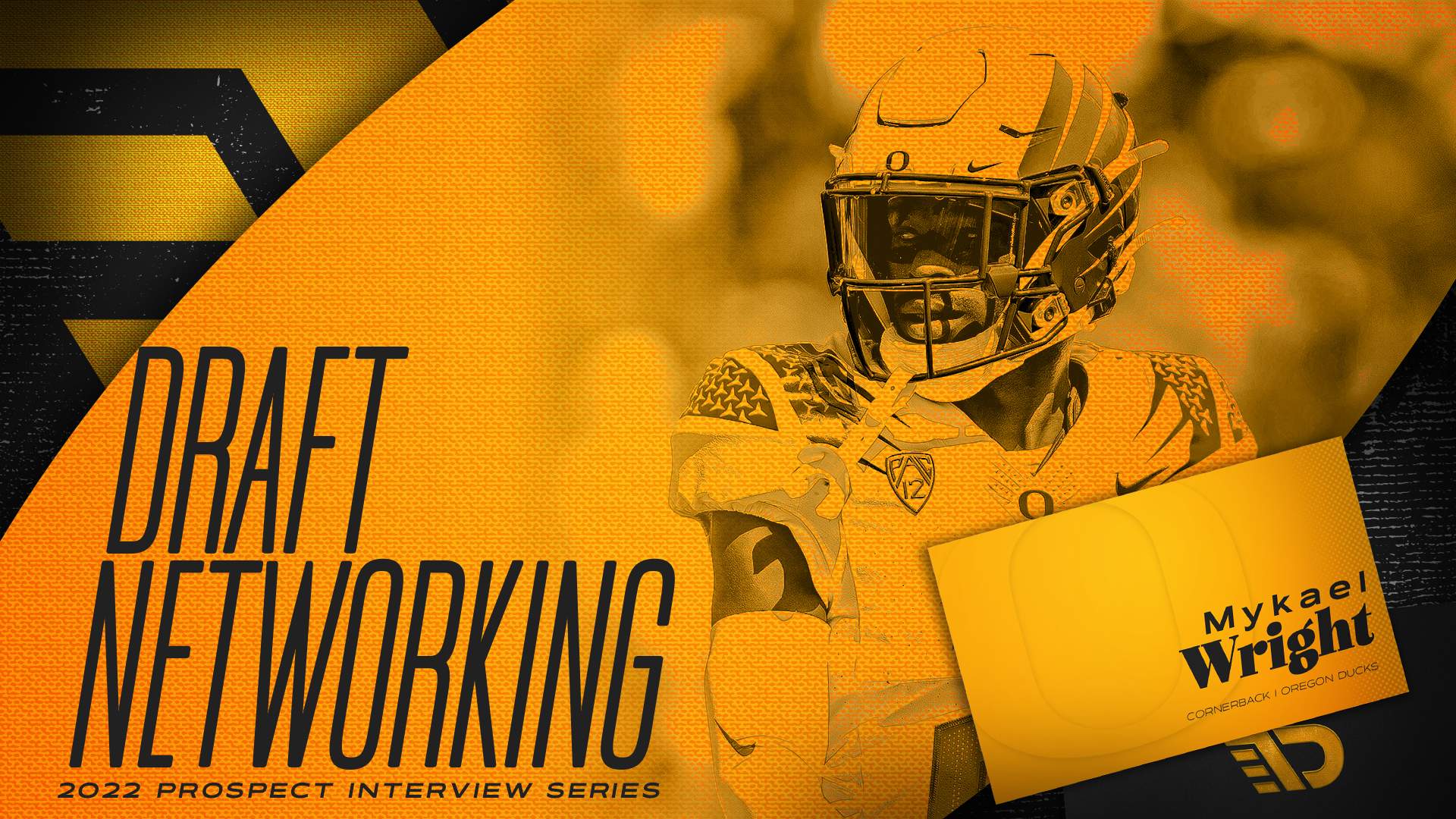 NFL teams are always mining the mid-to-late rounds of the draft for under-the-radar gems with the potential to wear multiple hats defensively and create turnovers in the secondary. Oregon cornerback Mykael Wright has the tools and proven pedigree to be one of those players in this year’s class after playing a crucial role for Oregon’s defense over the past three campaigns.

Wright recently spoke exclusively with The Draft Network regarding his impressive career at Oregon, why he gets his hands on the football so often, taking on a leadership role in 2021, what about the Oregon program allows it to consistently churn out high-level defensive backs, what kind of immediate impact he plans to make at the next level, and so much more.

JM: You depart Oregon for the next level with an impressive 17 pass break-ups to your name. What is it about your skill set that allows you to be around the football so consistently?

MW: I’ve always had a great feel for the ball. I used to play the receiver position back in high school. I’ve always been a natural hands-catcher.  I always thought I was going to be a receiver growing up (laughs). Now that I’m on the defensive side of the ball, I’m a player that’s comfortable attacking the ball in the air and disrupting the catch point. I’ve made a living around the football. I get my hands on the ball and that’s thanks to my background as a receiver growing up.

JM: You’ve made a smooth transition. Oregon has developed so many NFL-level defensive backs throughout your three years at the program. You played alongside and learned from guys such as Jevon Holland, Deommodore Lenoir, Thomas Graham Jr., Verone McKinley III, and others. What do you attribute that to within the program?

MW: I think it ultimately comes down to the brotherhood we’ve cultivated throughout the program. We didn’t have any issues with egos or anything like that at Oregon. The people there want to play for one another.

JM: It’s a terrific program with some excellent people sprinkled all throughout. You were one of the veteran defensive backs this year. Did you have to take on more of a leadership role this past season?

MW: I definitely had to step up and become that leader for our defense, and for our secondary. I had to become more of a vocal leader. I didn’t have a problem holding guys accountable for their actions and for their play.

JM: Throughout your conversations with NFL teams, do they see you playing more inside or outside at the next level? You’ve done a little bit of both at Oregon.

MW: It varies from team to team. I’ve had some teams ask about my comfort level playing the nickel position in the league and kicking inside on a more permanent basis. There’s been a handful of teams that have asked me about playing nickel at the next level.

JM: That’s fair. You’re not the biggest or longest defender in the world, but you love to tackle. You’re extremely competitive. How and where did you develop that mindset?

MW: I have an older brother and two younger brothers. We had to be tough growing up (laughs). We had a bunch of cousins that were always around as well. We played a lot of football growing up. We always used to be at the park together, or in the front or back yard playing football or basketball. We threw the ball around. We played around on that concrete (laughs). That’s where the toughness came from. I might be the smallest guy on the field, but I’ve never played like it, though.

JM: You’ve never played small throughout your time at Oregon. Which teams have you met with throughout the pre-draft process?

MW: I had virtual meetings with the Las Vegas Raiders, Minnesota Vikings, Chicago Bears, and Los Angeles Chargers, to name a few.

JM: There’s a lot of interest in you and it’s easy to see why on tape. If you could sit down with any NFL defensive back and learn from him while asking questions, who would you choose and why?

MW: I would probably go with Richard Sherman. He’s always struck me as one of the smartest defensive playmakers in the game. He’s never been the fastest cornerback, but he reads the game at an extremely high level. His football IQ helped develop him into one of the greatest cornerbacks of his generation. He’s always been smart enough to know what he’s doing, and when exactly he has to do it.

JM: That’s a terrific choice. We hope you receive the opportunity to sit down and talk ball with Richard Sherman sometime. I’ve really appreciated your time today. In closing, why should a team use one of their draft picks on Mykael Wright?

MW: When you draft Mykael Wright, you’re going to get a complete football player and all-around defensive back with high upside. That’s what I’m all about. I’ve been battle-tested at one of the best programs in the nation. I’m highly experienced. I’m going to come in and make an immediate impact at the next level.