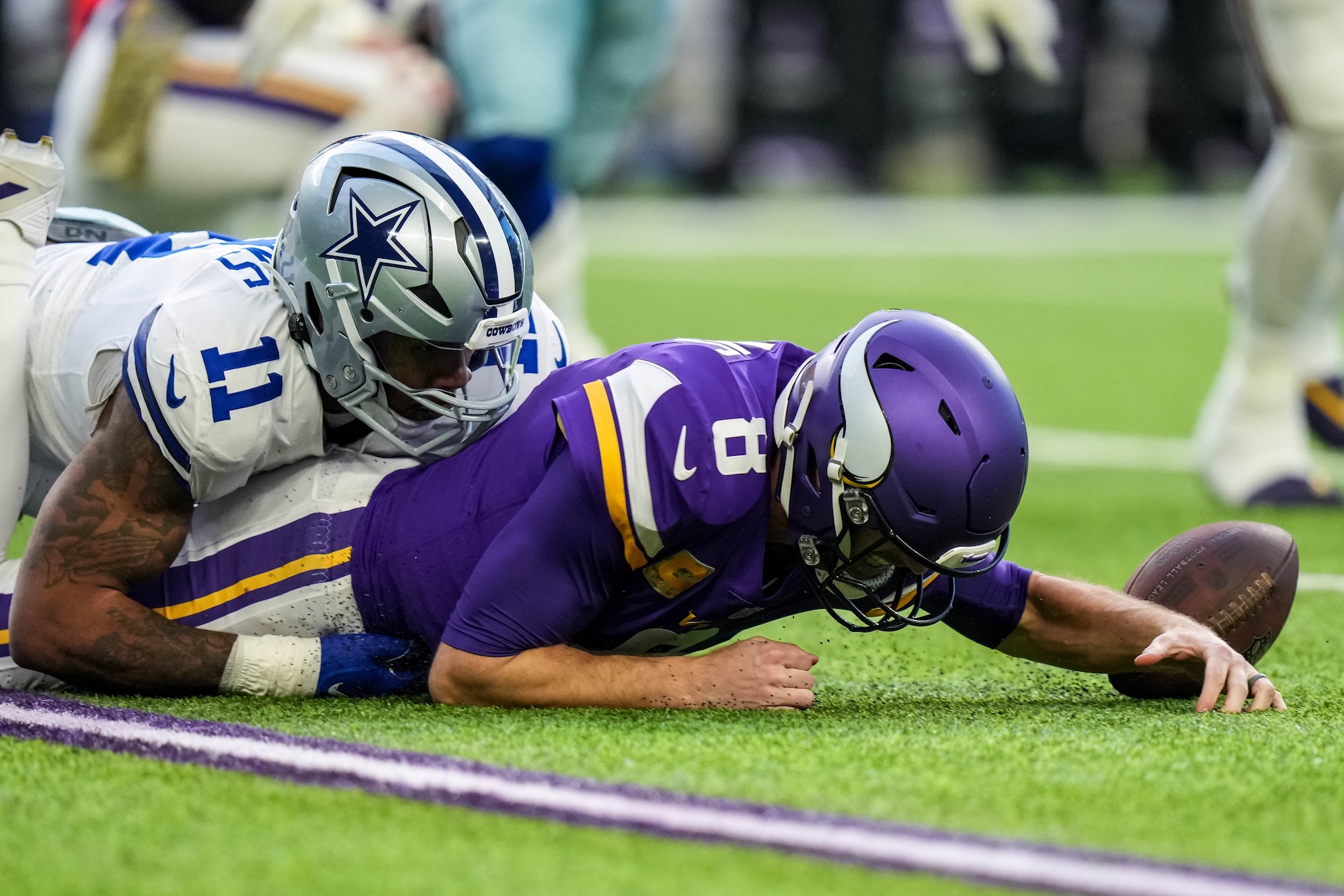 Is It Fair To Write Off Minnesota Vikings?

The 12-4 Minnesota Vikings have already clinched the NFC North division title despite being embarrassed by their arch-rival Green Bay Packers in Week 17. The Vikings can’t achieve the one-seed in the NFC and currently appear headed for a first-round playoff meeting with the New York Giants. The Vikings don’t carry the appearance of a football team that’s capable of making a legitimate postseason run.

Sunday’s 41-17 defeat to the Packers continued to expose some concerning trends. Starting quarterback Kirk Cousins completed 18-of-31 passing attempts for 205 yards, one touchdown, and three interceptions. It was Cousins’ fourth multi-interception game of the season and his second in his last three outings.

The Vikings went 5-of-12 on third down. Kevin O’Connell’s inconsistent ground attack barely surpassed the 100-yard rushing mark (102) as a unit with Dalvin Cook and Alexander Mattison being limited to 3.8 yards per carry. The Vikings were whistled for six penalties and fumbled on three separate occasions, losing one (another Cousins turnover). Packers cornerback Jaire Alexander shut down Justin Jefferson (one catch for 15 yards) while laying down a blueprint for upcoming opponents that will undeniably be copied.

Sunday’s emphatic defeat wasn’t Minnesota’s lone eye-opening letdown of the season. In Week 2, they were handled by the likely one-seed Philadelphia Eagles (24-7) with relative ease. A recent 11-point loss to the Detroit Lions (34-23) exposed cracks in their armor. Heck, the Vikings followed up that performance with a 39-36 comeback overtime victory over the Indianapolis Colts. Their second-half effort was miraculous, but allowing the lowly Colts to score 36 points gives pause. Even some of Minnesota’s wins haven’t been that impressive.

Minnesota’s 40-3 defeat to the Dallas Cowboys stands out as the most embarrassing pitfall of their regular season campaign. The Cowboys, who are legitimate NFC contenders, held the Vikings to 1-of-11 on third-down attempts. Cousins threw for 105 yards and was sacked on seven occasions. The Vikings were literally laughed off the field.

The Vikings are 2-2 against opponents that currently possess winning records. Minnesota’s record improves to 6-4 when including teams at .500—the Vikings have oddly played a bunch of contests against franchises with 8-8 records, aided by their twice-a-year-meetings with the Lions and Packers.

Minnesota’s defense is allowing a 31st-ranked 396.8 yards per contest, including an NFC-worse 273.4 passing yards per outing. Three of Minnesota’s potential postseason opponents possess top-10 ranked passing offenses (Tampa Bay Buccaneers, Lions, and Eagles). Both Tom Brady and Aaron Rodgers could enter the postseason with momentum at their backs. Minnesota’s secondary is easy pickings for veteran signal-callers.

The Vikings also received some tough injury-related news on Wednesday. Starting right tackle Brian O’Neill suffered a partially torn Achilles injury and will miss the remainder of the season, according to multiple reports. O’Neill gave the Vikings more than 1,000 quality snaps this season as a balanced player in pass protection and run blocking. He’ll be replaced by Eli Udoh, who was called for a league-high 16 penalties last season, per Pro Football Focus. The right side of Minnesota’s offensive line just got weaker.

A likely first-round matchup with the Giants screams potential upset. The 9-6-1 Giants are arguably writing the league’s most heartwarming and surprising storyline of the 2022 campaign. Nobody expected Brian Daboll’s Giants to qualify for the postseason. They’re playing without the constraint of expectations. That makes them a dangerous, formidable opponent.

The 12-4 Vikings have exceeded expectations from a record standpoint. O’Connell deserves praise as an ascending first-year leader that’s leading the Vikings appropriately. Few predicted the Vikings to win 12-plus contests. It’ll matter little if they’re eliminated in the first round.