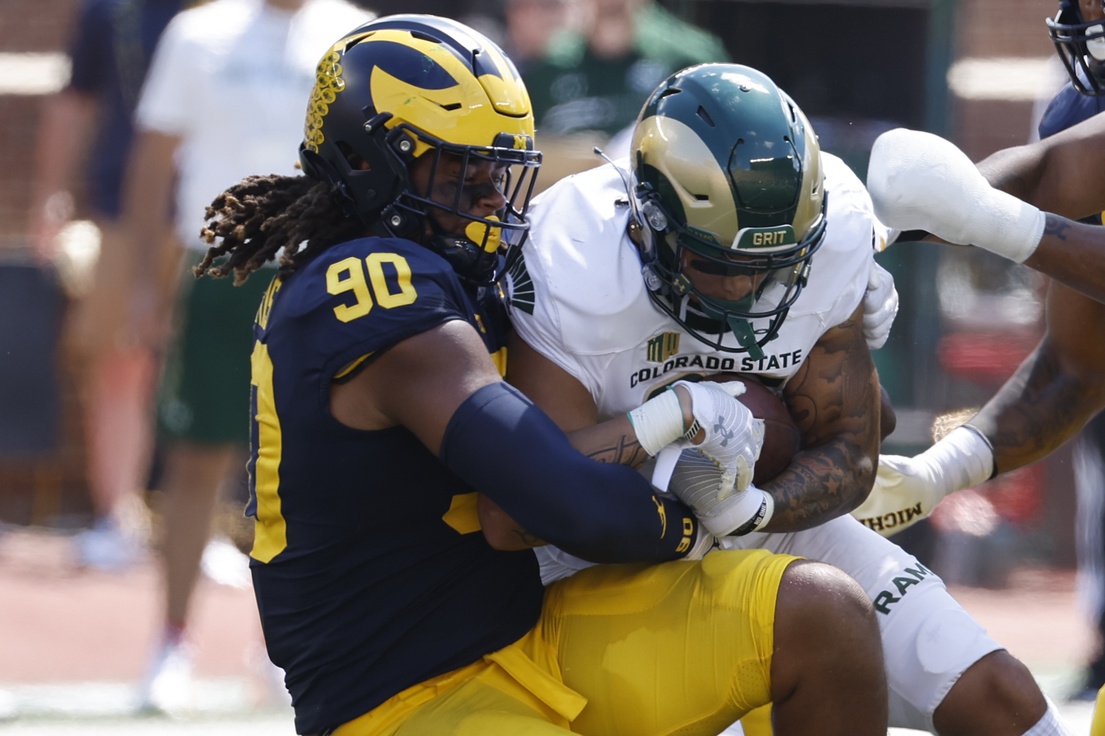 When you talk about the top-edge rushers/defenders of the 2023 NFL draft class, plenty of names come to mind. Will Anderson Jr., Myles Murphy, Isaiah Foskey, Tyree Wilson, and Derick Hall, to name a few. These names are mentioned as potential first-round prospects for good reason. But there is a senior edge defender that is moving up my rankings this season: Michigan’s Mike Morris.

Mike Morris has been on a tear this season. The timing could not be more perfect for him and the Wolverines. Their top-two edge defenders, Aidan Hutchinson and David Ojabo, left for the NFL this past spring. Morris has assumed the role of the “go-to” guy for this defense.

The numbers back up what is shown on film. Morris has 16 hurries, five QB hits, and six sacks through the seven games.

Mike Morris, screaming off the edge for his 2nd sack of the day. pic.twitter.com/TN3UOkz8pd

Who doesn’t want a 6-foot-6, 292-pound, aggressive, and versatile defensive lineman? Someone that does not value winning, that is who!

Last season, Morris played 209 pass rush snaps with eight hurries, four QB hits, and two sacks. He is clearly ahead of those numbers with 72 fewer pass-rush snaps. This season, he has taken the bull by the horns and is making a name for himself.

What makes him so productive and intriguing? To start, Morris has the build and frame of a traditional hand-in-the-dirt defensive lineman. The surprising part is, he is comfortable standing up on the edge and rushing the passer—I love the versatility he adds to a defensive front.

In addition to playing off the edge, Morris can reduce inside as a 4i or 5-technique and attack the B/C gaps to create interior pressure. Coaches can deploy Morris on twists and stunts from either inside or outside alignment. He has showcased the ability to use his hands better this season to soften angles and win the edges.

I cannot forget to mention his value as a run defender. He stacks tight ends with ease to set a hard edge with proper leverage outside. The NFL is a “more you can do” type of league. Your value increases the more ways a coordinator or coach can utilize your skill set. Coaches will adore the physicality and temperament Morris plays with.

Is he the twitchiest or most flexible pass rusher in the class? No. That does not mean he cannot wreak havoc on opposing offenses. Morris has five more regular season games to add to his already impressive stat line. Considering the path he is on, I believe double-digit sacks are well within reach.

Nice Rip and hit on the QB by Michigans DE Mike Morris! pic.twitter.com/1KN0DgPYRV

If everything remains the same, Morris and the Wolverines will be undefeated heading into a regular season finale versus their arch nemesis Ohio State. That would be a heavily scouted and viewed matchup. Morris would have the opportunity to defeat the Buckeyes’ OT tandem of Paris Johnson Jr. and Dawand Jones on his way to Heisman candidate QB C.J. Stroud. Moments are important in football, not only for awards but for draft stock as well.

The brighter the lights, the bigger the moment is to seize. Mike Morris’ season has a few more chapters to be written over the next five weeks. I, for one, am excited to see how the story ends. If you are not aware of the brilliance he has put on display this season, I recommend you quickly get familiar!