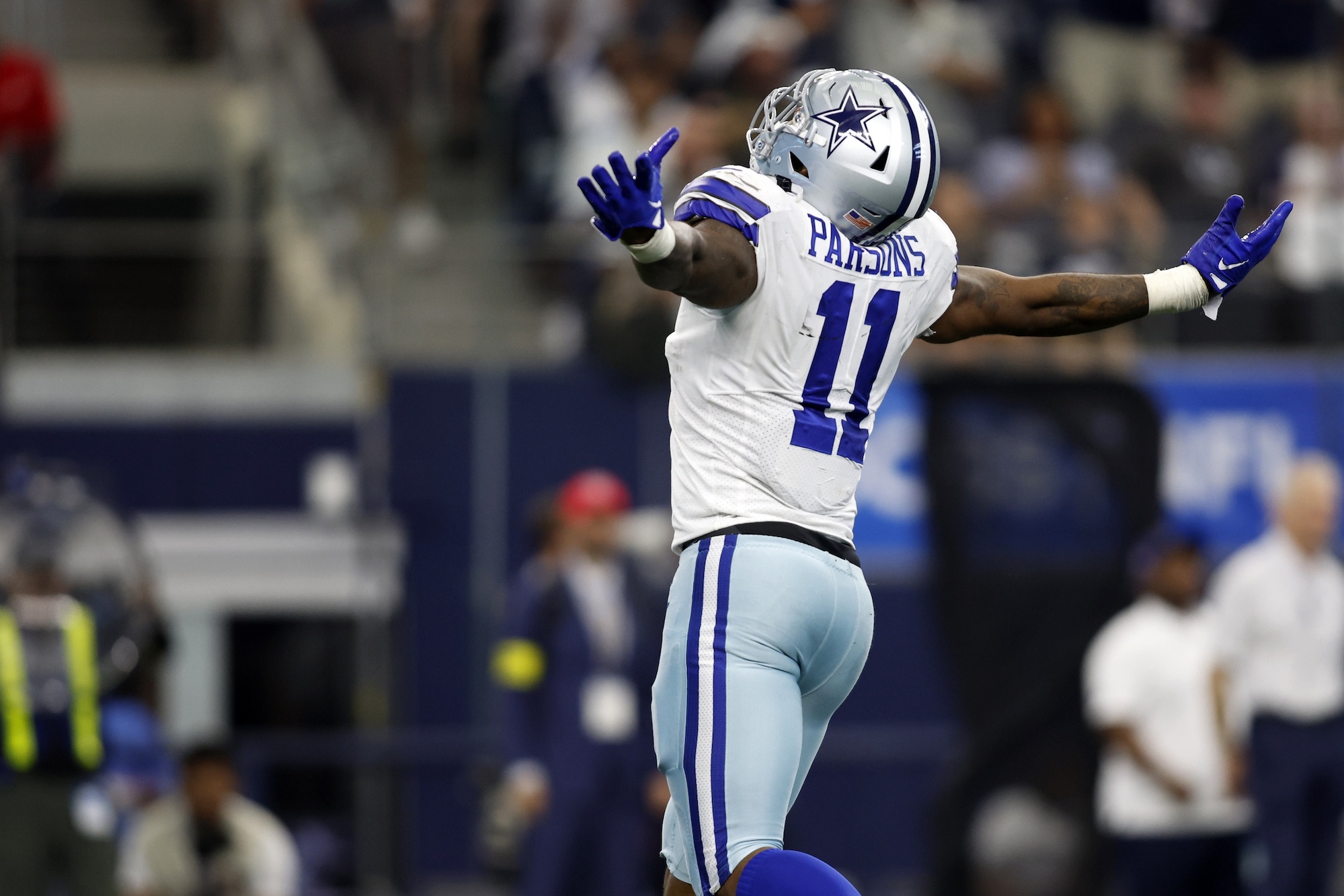 Dallas Cowboys linebacker Micah Parsons was an absolute menace in their dominant 22-10 victory over the Super Bowl defending champion Los Angeles Rams on Sunday. Parsons recorded 2.0 sacks and a team-high nine quarterback pressures, via Next Gen Stats. Parsons is quickly establishing himself as the best defensive player in today’s NFL. Parsons appears primed to compete for Defensive Player of the Year honors after capturing last season’s Defensive Rookie of the Year award. Parsons sealed Sunday’s victory with a strip sack.

Los Angeles’ struggling offensive line simply had no answers for Parsons, who recorded his third multi-sack game of the young season. Parsons’ showing catapulted him to a three-way tie for the league lead in sacks (6.0 sacks, alongside Matthew Judon and Nick Bosa). Parsons leads the league in pressures (24). Parsons is currently the league’s lone defender that ranks within the top three in sacks, tackles for loss, and quarterback hits this season. Parsons’ 19.0 sacks through his first 21 career games are the second-most in history, trailing just Joey Bosa (20.0) for the all-time lead. We are witnessing Parsons develop into a superstar defender.

The No. 12 overall selection in the 2021 NFL Draft, Parson’s efforts are a big reason why the 4-1 Cowboys have managed to survive a multi-week injury to franchise quarterback Dak Prescott. Parsons has doubled DeMarcus Lawrence’s early-season sack total (3.0) as the duo forms one of the most haunting one-two punches in the NFL. Parsons currently leads the Cowboys in tackles for loss (7) and has also forced a fumble. He’s Dallas’ most impactful defender.

Parsons is among the league leaders in double-team rate at EDGE and pass-rush win rate among all qualifying defenders, per ESPN Stats & Information. It indicates Parsons is winning consistently despite receiving extra special attention from opposing offensive lines. Parsons is also among Pro Football Focus’ highest overall rated defenders and pass rushers. He’s simply been the league’s best defender through five weeks.

Dan Quinn’s defense currently ranks seventh in total yards allowed per contest (311.4), seventh in passing yards allowed per game (193.8), and third in points allowed per outing (14.4). Their last two opponents have scored 10 points apiece, and no team has scored 20-plus points on the Cowboys this season (The Tampa Bay Buccaneers scored 19 in Week 1). Dallas has given up five touchdowns through the first five games of the 2022 campaign, joining the legendary 1972 Cowboys team as the only squad in franchise history to give up five touchdowns or less in the first five games of the season. Dallas is second in the league in turnover differential at +5. Parsons is spearheading Dallas’ elite defensive showings.

Parsons’ development into a premier pass rusher has been nearly unprecedented. Parsons recorded 6.5 sacks in his two-year college career. He was an excellent off-the-ball linebacker who could occasionally find success when called upon to rush the quarterback. Nobody quite envisioned this.

Parsons is true greatness in its purest form. He’s appropriately building on last season’s historic success. Aaron Donald has long been considered the league’s best defender, and rightfully so. Micah Parsons is currently gunning for the crown and the gap is shrinking by the day.