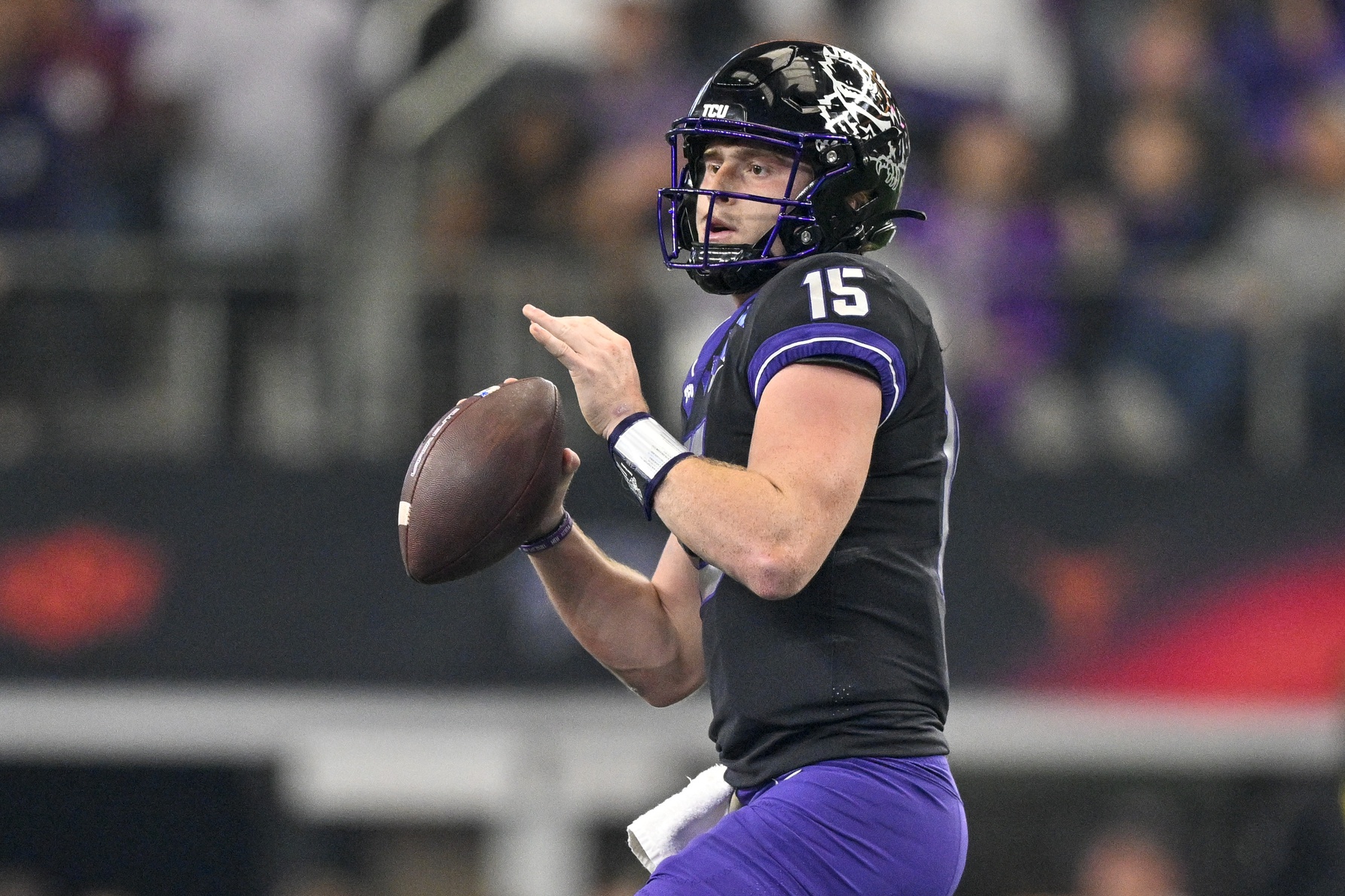 Which NFL Teams Are Best Fits For Max Duggan?

TCU quarterback Max Duggan announced his intention to enter the 2023 NFL Draft via his official social media pages. A multi-year starter, Duggan now departs the Horned Frogs program as one of the most illustrious quarterbacks in school history. Duggan has thrown for nearly 10,000 career passing yards and 71 touchdowns.

Duggan is a mid-round quarterback that’s going to capture the attention of several NFL franchises. We’ve seen Bailey Zappe succeed in a similar situation at times this season. Seventh-round rookie quarterback Brock Purdy is leading the San Francisco 49ers to the postseason. Duggan is the type of quarterback prospect that’s capable of duplicating their success. We’ve identified three ideal fits for Duggan in the mid-to-late rounds.

Duggan has done an excellent job overseeing Sonny Dykes’ variation of the Air Raid offense throughout 2022. Duggan is athletic enough to gain chunks of yardage with his legs. Dykes has called plenty of quarterback runs that allow Duggan to showcase his dual-threat abilities. Duggan would run some similar tendencies in Kliff Kingsbury’s offense in Arizona.
Furthermore, Cardinals starting quarterback Kyler Murray suffered a season-ending torn ACL injury in Arizona’s Week 14 loss to the New England Patriots. The timing of Murray’s injury is awfully unfortunate and could hamper the first few months of his 2023 campaign. The Cardinals must plan accordingly in case Murray is limited throughout September and October.

Current backup quarterback Colt McCoy is signed through 2023, but the soon-to-be-37-year-old could opt for retirement instead. Arizona would be wise to protect their investment in Murray by drafting a young quarterback. Duggan to Arizona makes sense.

The Vikings have constantly toed the line between treating Kirk Cousins like a franchise quarterback and moving on from him altogether. Cousins is signed through the 2023 campaign, but the Vikings’ long-term plans at quarterback remain unclear. Cousins is in his mid-30s and general manager Kwesi Adofo-Mensah must begin thinking of the future.

Cousins is playing good enough football to prevent the Vikings from investing a premium first-round selection into the quarterback position during the 2023 NFL Draft. Given the situation, the Vikings are much more likely to draft a quarterback between rounds 3-5. That’s prime Duggan territory.

Vikings head coach Kevin O’Connell is a former NFL quarterback that will appreciate Duggan’s ability to read opposing defenses. O’Connell can maximize Duggan’s skill set and Duggan would be lucky to land under O’Connell’s watchful eye in Minnesota.

Rams starting quarterback Matthew Stafford has dealt with spinal cord and elbow injuries throughout the 2022 campaign. We’re unlikely to see Stafford take the field again this season and his future effectiveness and availability currently hang in the balance—even if he says he’s not retiring.

Baker Mayfield is unlikely to return to the Rams in 2022. Mayfield is using his current stint as their starter to showcase his talents ahead of unrestricted free agency. The Rams won’t roster a legitimate backup or borderline starting quarterback behind Stafford assuming Mayfield departs the franchise in the offseason.

Rams general manager Les Snead will have to get creative at the quarterback position via the middle rounds given his lack of draft capital and financial flexibility. Taking a swing on a quarterback like Duggan would be a worthy gamble for the Rams. Rams head coach Sean McVay could believe that his quarterback-friendly system is capable of maximizing Duggan’s talents like it once did for Jared Goff.