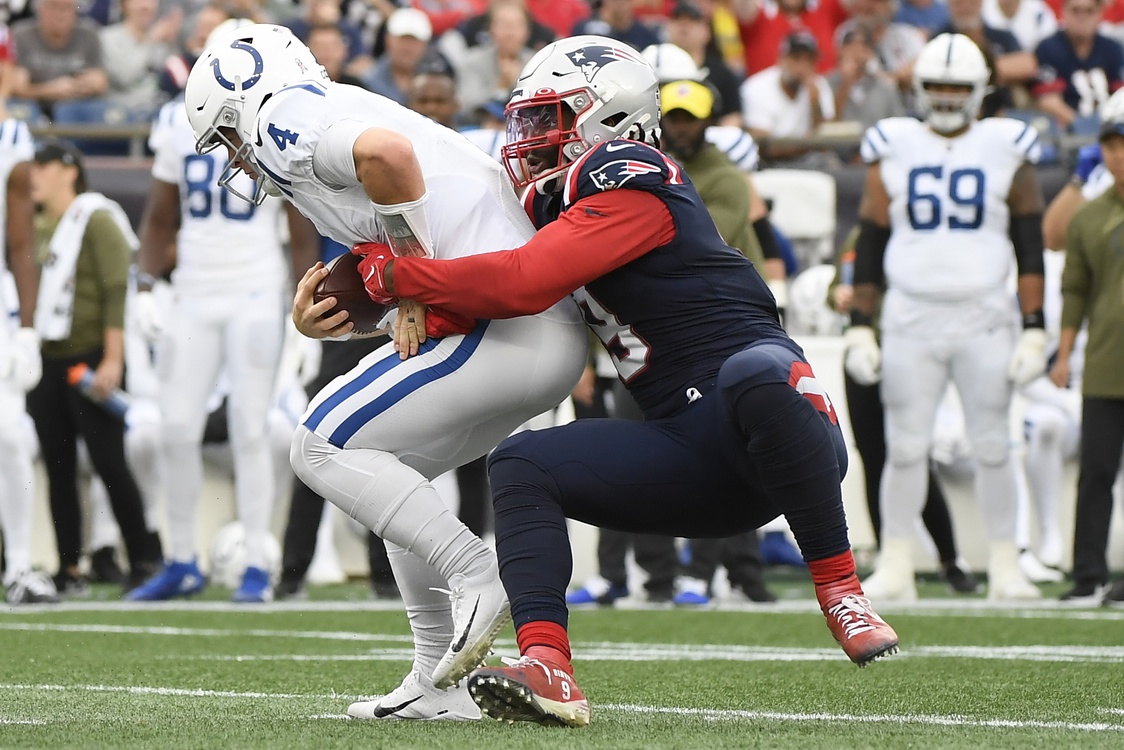 New England Patriots OLB Matthew Judon’s performance this season has been as eye-popping as the red sleeves that have become synonymous with him ever since his arrival in Foxboro last season—to those who have paid attention. Judon’s performance this season has mostly flown under the radar, with attention and fanfare going to stellar seasons from pass rushers such as Micah Parsons, Nick Bosa, and Myles Garrett this year.

This has been reflected in the betting markets for the NFL’s Defensive Player of the Year award. As of Nov. 1, Judon held +3000 odds for the award, compared to -225, +600, and +850 odds for Parsons, Bosa, and Garrett, respectively. But after a dominant Week 9 performance against the Indianapolis Colts that included 3.0 sacks, three tackles for loss, and four quarterback hits on Sam Ehlinger, Judon has proven that, despite what the betting markets reflect, he should be in the heart of the conversation for the award.

Judon’s season stacks up to his competitors for the Defensive Player of the Year award from both a statistical and qualitative perspective. The raw counting numbers are plain to see. Judon leads the NFL in both sacks (11.5) and quarterback pressures (32). He became the first player in the NFL to reach double-digit sacks on the season on Sunday. Judon’s 11.5 sacks through nine games put him on pace for 21.7 sacks on the season. Michael Strahan’s NFL record of 22.5 sacks is not inconceivable at this rate, especially with more performances like the one he put up against Indianapolis.

Judon’s numbers stack up well in comparison to his chief edge defender competitors for the award. According to NFL Next Gen Stats, Judon’s 5.1% sack rate on pass-rush snaps ranks first in the NFL, ahead of Bosa (second, 4.8%) and Parsons (fourth, 4.0%). These players also have lower counting stats than Judon to this point in the season, though it should be noted that Judon’s raw numbers are a bit skewed by the fact he has played one extra game. Regardless, Judon’s cushion in the statistical department as of now should put him on solid footing in comparison to the other DPOY candidates once New England returns from its bye week in Week 11.

Considering Judon’s importance to New England’s defense makes his season even more impressive. The Patriots typically run a 3-3-5 “base nickel” defense with two bigger-bodied defensive tackles (think, Lawrence Guy, Christian Barmore, Davon Godchaux), one larger 5-technique defensive end (think, Deatrich Wise), and an outside linebacker (think, Judon) lining up on the line of scrimmage. Occasionally, a second linebacker (this year, Jahlani Tavai), flanks Wise on the line of scrimmage. Judon has played 75% of the team’s snaps this season, providing the team with a steady edge presence at outside linebacker. The team’s next closest player at that position? Linebacker Anfernee Jennings (31.5%), with quite a few of those reps coming in designed pass-rush packages.

Simply put, the Patriots do not have another player like Judon, and certainly not one who can fill his role at anywhere close to a similar level of production. Judon shapes the way the Patriots can and do play their defense. In comparison to his peers, this is not unique; the Dallas Cowboys, San Francisco 49ers, and Cleveland Browns all structure their fronts around their supernova edge defenders. Nevertheless, it should be a prerequisite for consideration for the award. Judon is not “just another guy” in New England’s defense. He is the guy, and when you dig into it, arguably the only guy who truly plays this role in coach Bill Belichick’s scheme.

Ultimately, the biggest case against Judon may be the most rudimentary one: the eye test. People can read stats, and the stats tell a story. Judon should be in the conversation. But an evaluative view of Judon in comparison to Parsons, Bosa, and Garrett may lead us in the direction that, while he is a solid candidate for the award, he should not be favored for it. According to Pro Football Focus, Judon has graded out as a 73.4 overall this season. While solid, the grade does not hold up well in comparison to Parsons (90.9), Bosa (89.9), and Garrett (92.9).

To add to this, a graph published by ESPN’s Seth Walder illustrated the difference in the quality of players that can’t be measured by the “it just looks like he’s more dominant out there” of the eye test. Walder’s graph shows that Judon gets double-teamed at about the same rate as players such as Montez Sweat, Travon Walker, and Baron Browning, and that he wins on his pass rushes at around the same rate as these players. Meanwhile, Parsons and Garrett have the highest pass rush win rates in the league; they consistently win their pass rush reps, despite the fact they are also among the most double-teamed players in the league. Bosa also performs extremely well on these metrics.

Watching football and believing these players are better than Judon despite what the counting stats say isn’t folly, it is supported by the play-to-play grades and the underlying data.

-In Chubb, Dolphins traded for No. 3 player in PRWR at Edge.

-Just one sack for Arnold Ebiketie, but PRWR is encouraging sign for rookie. pic.twitter.com/Jdp5izB8s8

The raw counting numbers back up the fact that Judon should be a serious NFL Defensive Player of the Year candidate. His case gets even stronger when considering what he means to New England’s defense. However, his performance to date does not make him the favorite for the award; that much is clear by looking at the advanced numbers behind his and their case. Judon’s production and situation merely put him in the conversation—squarely—a conversation that includes the game’s most elite.