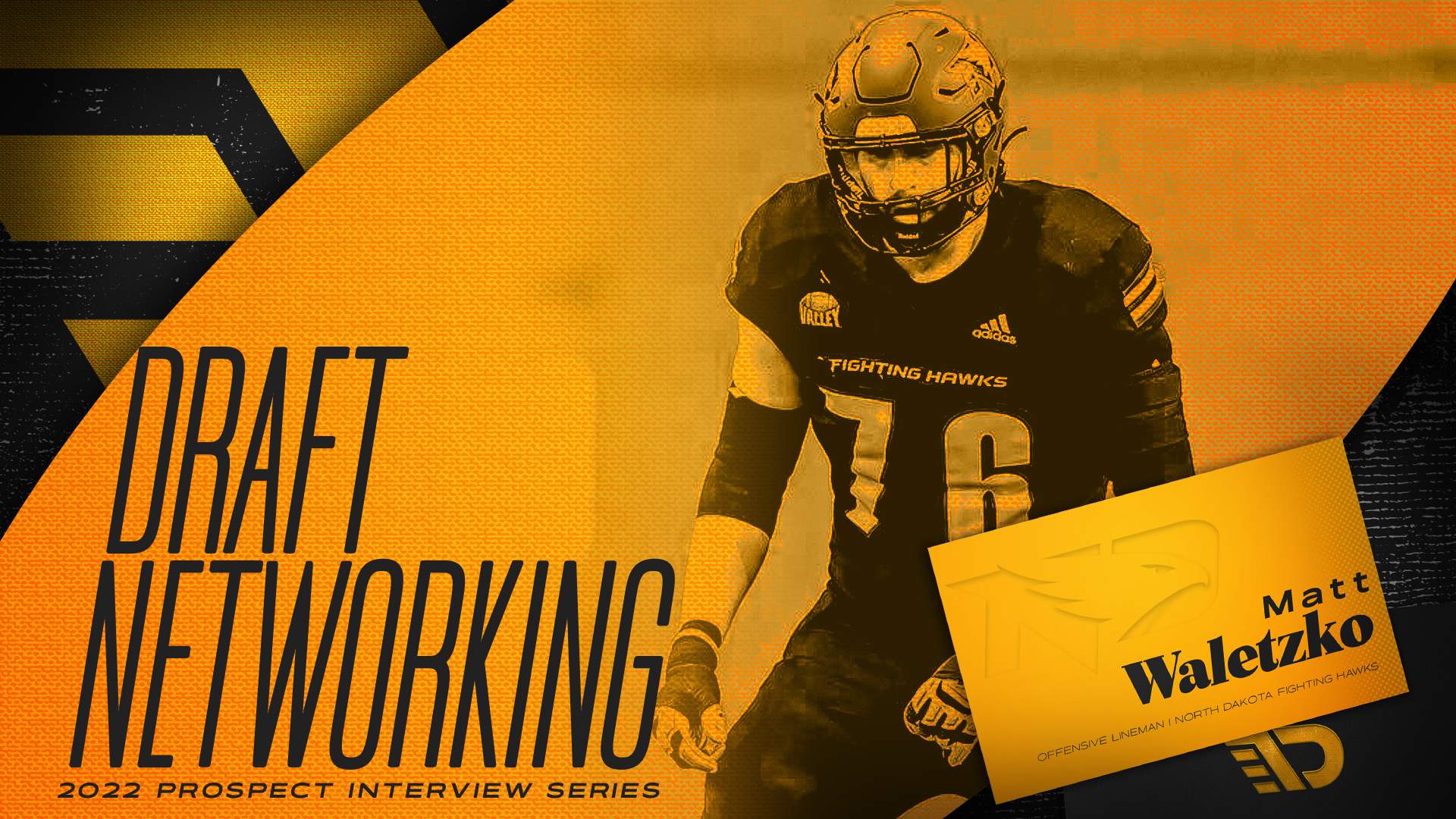 Offensive tackles will get drafted early and often all throughout the 2022 NFL Draft. Luckily for franchises that won’t have the luxury of drafting the first or second tackle off the board, the middle rounds are absolutely loaded with potential high-end talents. University of North Dakota tackle Matt Waletzko promises to be one of the most exciting and intriguing prospects available.

A physical and athletic specimen with arms longer than 36 inches, Waletzko recently spoke exclusively with The Draft Network regarding his experience and excellent performance at this year’s NFL Scouting Combine (5.03 in the 40-yard dash), how he uses his elite length to his advantage, debunking the “small school”  narrative, which teams have shown interest in him throughout the pre-draft process, and so much more.

JM: You started five games at left tackle as a freshman back in 2018. What is it about your game and your overall approach that allowed you to contribute from such a young age?

MW: I’m a quick learner first and foremost. It probably boils down to my ability to pick things up on the fly. Coming into a program as a freshman offensive lineman, there’s always going to be a steep learning curve involved. You’re learning an entirely new offense that’s probably going to be more complex than what you ran at the high school level. It’s a new team and a new environment. My ability to catch onto the playbook and quickly acclimate to the team around me helped me get onto the field rather quickly. It allowed me to climb the depth chart a lot faster than most anticipated. If I wasn’t a quick learner, it wouldn’t have been possible.

JM: You went through an injury in 2019 and the 2020 campaign was largely lost due to the pandemic. What was your mindset like entering 2021, your fourth and final season?

MW: That’s a great question. Obviously, those two things threw some adversity my way, but it’s all about what you do with that adversity and how you approach it that will allow you to make the most of your situation.  Going into my final year, I was a team captain and I wanted to shape the culture while helping the team rally around our opportunities.

We tried to make the most of our season. Having a determined mindset was everything. I remained positive throughout all of the unforeseen adversity that was thrown my way. That was huge because having those two years cut short gave me an edge and I wanted to end things on the right note. I played every snap like it was my last. It helped me go out there and do what I needed to do.

JM: You have the ideal mindset. You wrapped things up nicely with a terrific season in 2021. You had a great year. You then went to the NFL Scouting Combine and blew away everyone in attendance. You measured in with 36-inch arms and ran the 40-yard dash in 5.03 seconds. Do you feel like you surprised some people in Indianapolis?

MW: You know what? Yeah, I think I did. You said it yourself regarding my 36-inch arms, and I essentially ran the 40-yard dash in five seconds flat. I don’t know if I was on too many people’s radar before the combine. I’ve been able to capture some momentum as this process has continued to steamroll forward.

I definitely opened some people’s eyes at the combine. I’m proving that I can play at the next level despite coming from a smaller school. Where I came from doesn’t matter. I knew I was going to test pretty well because I’ve always been an impressive athlete for my size. I definitely think I opened some eyes at the end of the day.

JM: The arm length of 36 inches is particularly eye-popping and impressive. What are some of the ways you use that length to your advantage?

MW: I use my length to my advantage in a lot of different ways. Being able to use it to the best of my ability on a snap-by-snap basis is key. It definitely pops in pass protection. I’m able to get on guys a lot faster because my arms are longer than just about everyone I encounter. I can fire off the snap and get a hold of my opponents. I’ve seen it pay dividends in the running game as well.

Learning how to better use my length as a run blocker is definitely something I’ve been working on throughout this process. It will be a big part of my game going forward. I’m aware that the competition is only going to get better from here. I have to use my physical traits to the best of my ability. That’s going to be huge moving forward.

JM: Absolutely. You’ve mentioned your athletic ability and it obviously pops on tape, and it certainly did at the combine as well. There are a lot of outside zone teams in the NFL nowadays, including the defending Super Bowl champion Los Angeles Rams. Is that a scheme you see yourself playing in at the next level?

MW: I love that outside zone, downhill attacking, get-after-guys approach. That’s definitely something I love to do because at North Dakota, we got off the ball and got after defenders on a snap-by-snap basis. We ran a lot of outside zone there as well. At the end of the day, I think I can play in any scheme. Outside zone is definitely a big one for me. I can definitely play well in that scheme.

JM: Would you say you’re more developed in pass protection, or as a run blocker at this point in time?

MW: I’ve really been focusing on my ability in pass protection throughout this pre-draft process because it’s so important in today’s pass-happy league. If you can’t protect your quarterback, you’re not going to have a job. For me personally, pass protection has been a big emphasis, especially having gone down to Mobile, Alabama for the Senior Bowl. I was getting ready for that challenge. Because of all that, I’d definitely say I’m more fine-tuned as a pass protector.

JM: All of that makes sense. Have you met with any teams virtually or via Top 30 in-person visits, and do you have any more of those coming up?

MW: I’ve probably met with seven or eight teams via Zoom. I’ve met with the Tampa Bay Buccaneers, Chicago Bears, Arizona Cardinals, Jacksonville Jaguars, Houston Texans, and a few others. I made a Top 30 visit with the Denver Broncos. I have some more things coming up.

JM: There’s a lot of interest in you and it’s easy to see why. You tipped the scales at 305 pounds at the combine, which was big for you. You had previously been listed under 300 pounds at times. Did you have to go through any sort of transformation in order to make your desired playing weight?

MW: My lowest weight at North Dakota was around 295. I initially came in pretty heavy out of high school and I dropped down to 295 around my sophomore season. I had a lot of bad weight on me at the time, like most high school athletes do. I wanted to build it back up the right way and that’s exactly what I did.

I played my senior season at 305 pounds. I’m sitting at about 315 pounds right now. The pre-draft training process helped me get there. I’d say 315-320 is my optimal playing weight.

JM: You’ve been terrific throughout this pre-draft process, but it won’t stop some analysts from referring to you as a “small school” prospect. How do you typically respond?

MW: Even though I come from a small school, it doesn’t really matter anymore. We’re all on the same playing field going forward. We’re all about to strap on professional jerseys and helmets. It’s about to become a matter of who can play and who can’t. We all have to show up going forward. This pre-draft process has opened my eyes to that. It doesn’t matter where you come from if you can play. The NFL will always seek out and find talent.

JM: You make a great point. I’ve really appreciated your time today. What kind of impact is Matt Waletzko going to make at the next level?

MW: I’m going to make the biggest impact I can make. That’s obviously my goal going forward. Whatever team I’m blessed to be drafted by, I’m gonna go in and embrace my role. Whether that’s as a starter or playing as the sixth-swing offensive linemen, or whatever role I’m destined to play, I’m going to put my best foot forward. My goal is to earn playing time. I’m gonna do what I can to better the team. I’m excited to help out my fellow offensive linemen in any way I can.