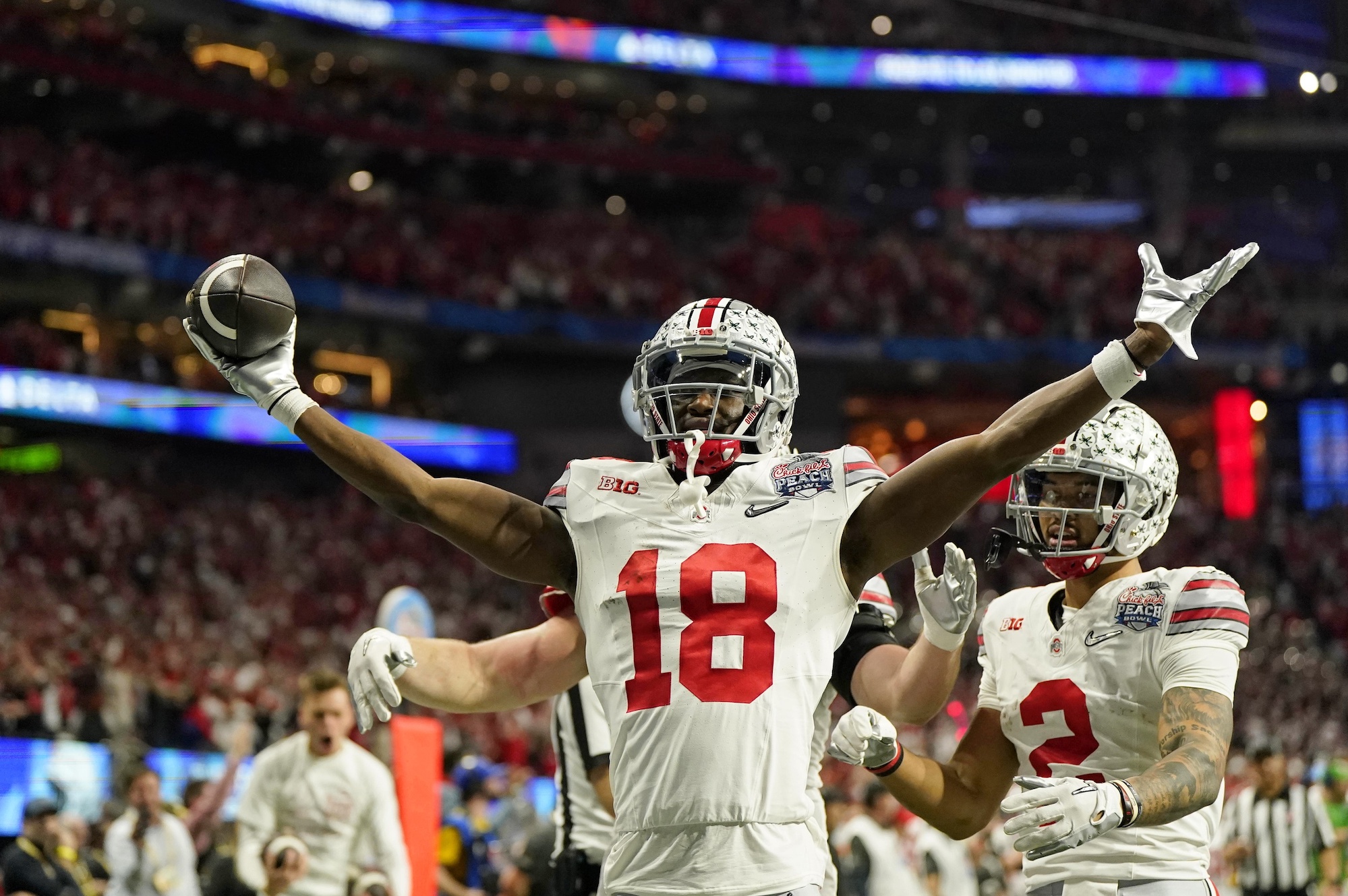 The nation’s top wideout Marvin Harrison Jr. won’t hear his name called on NFL draft night until the spring of 2024, but it’s never too early to talk scheme fit—especially after his huge impact in the CFP semi-finals. A stud of studs standing at 6-foot-4 with all the bells and whistles you look for in a WR1, here are a few teams that shouldn’t hesitate to add the Ohio State wideout in about 15 months if granted the opportunity.

An obvious fit, Chicago has done zero favors to Justin Fields on the outside. Darnell Mooney has been a nice story, but outside of him, the Bears are a wasteland at the WR spot. It’s been on Fields to create with his legs for the majority of the season. While that’s fine and all as he has the ability to do so, keeping the wear and tear of contact off his body and allowing the offense to expand via more weapons on the perimeter remains paramount. Fields has the arm to sling it with the best of them, and with Harrison Jr. aligned as his top target, the Chicago offense would truly begin to blossom.

An organization expected to take a franchise-altering signal-caller this year, adding a talent like Harrison Jr. to pair with Bryce Young or his Buckeye teammate C.J. Stroud would excite me if I’m general manager Nick Caserio. In an AFC South division that remains a toss-up when projecting a winner next fall, evolving the offense around a stout run game headlined by Dameon Pierce could see Houston exceed expectations. Although the Texans have a ways to go in solidifying their front five, the best way to get a young quarterback comfortable in the pocket is to have an explosive set of hands that can also serve as a security blanket on high-leverage downs. Harrison Jr. fits the script.

The presence of Michael Pittman Jr. and Alec Pierce wouldn’t sway me away from taking a talent like Harrison Jr. The old stomping grounds of his Hall of Fame father, seeing “Harrison Jr.” in Colts blue would provide both a sense of nostalgia and excitement for the future with a dynamic three-headed trio of pass-catchers. The run game is led by Jonathan Taylor, but Indianapolis has to figure out the QB position. If they’re in a spot to add the do-it-all weapon, I wouldn’t get cute.

D.J. Moore is already in town, and if they get their QB of the future in a few months, Harrison Jr. could thrive from the moment he steps foot in Carolina. The future of the division remains up in the air, and with an uber-talented young defense, boosting the offense with a young playmaker like Harrison Jr. could see the Panthers become the team to beat in the NFC South. A prospect that looked NFL-ready during his prep days in Philadelphia, a duo of Harrison Jr. and Moore would be an electric factory.

We’ll see what happens under center in Vegas, but any quarterback that has Davante Adams and Harrison Jr. to his left and right would feel like they hit triple-7s at the casino. The bright lights of the strip would fit his game to a T as he has all the ability in the world to become one of the league’s best in just a few seasons’ time. Size, route-running ability, game-breaking speed, ability to play above the rim… there aren’t many boxes he doesn’t check as a player that executives will drool over to get in their offense. The Raiders currently have no identity, and the defense needs bodies too, but if they get their QB in the building next fall and eye fresh legs on the perimeter in what may be a down year in 2023, Harrison Jr. could be the pick to pump life into the franchise.