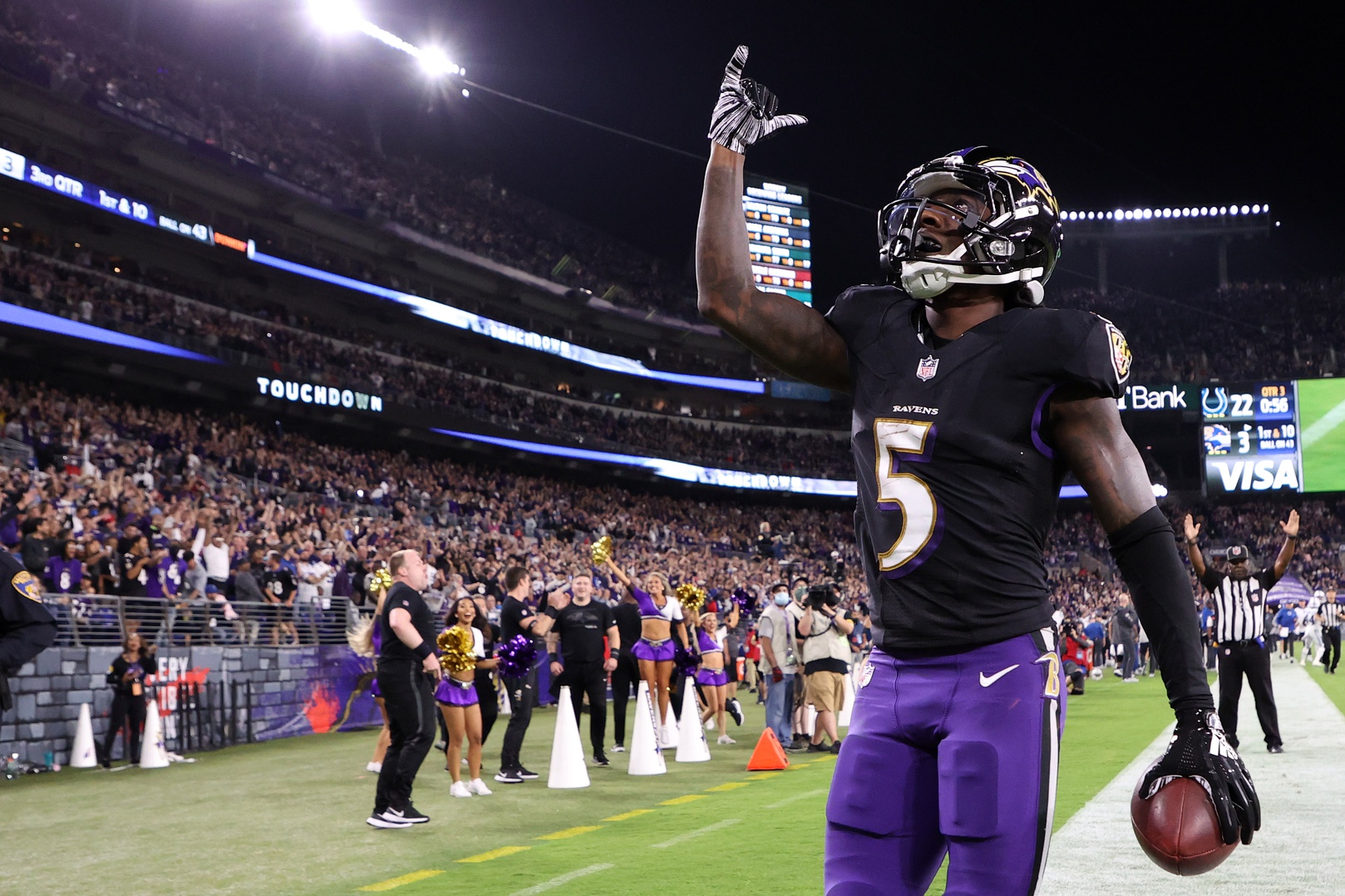 How Quickly Should Cardinals Give Marquise Brown A Contract Extension?

Of all the player movements that occurred this offseason, one of the biggest moves involved wide receiver Marquise Brown. The Baltimore Ravens traded Brown to the Arizona Cardinals in exchange for a first-round selection (used to eventually draft Tyler Linderbaum via a separate trade back). Brown’s arrival in Arizona couldn’t be more timely. The former Oklahoma standout will serve as Arizona’s go-to receiver while DeAndre Hopkins serves a six-game suspension for violating the league’s NFL Performance Enhancing Drug policy.

Arizona has already exercised the fifth-year option on Brown’s contract, which means he’ll remain on their roster through 2023 while earning a fully-guaranteed $13.4 million. Brown is certainly in General Manager Steve Keim’s plans beyond the 2023 campaign, though. The Cardinals paid a high price in order to acquire Brown, which essentially forfeits any leverage they possess in contract extension discussions. Allowing a player to walk at the conclusion of his rookie contract after trading away a first-round selection in order to acquire him doesn’t reflect a winning business model. Brown’s contract will require amendment sooner rather than later.

Cardinals Head Coach Kliff Kingsbury has already admitted as much.

“We’d love to get it [a contract extension with Brown] done,” Kingsbury recently said. “Hollywood is a guy that we see as a long-term answer.”

Brown is likely to earn said contract extension via his on-field play. Hopkins‘ absence will thrust him into a starring role alongside his former collegiate quarterback Kyler Murray. Brown recorded 75 receptions for 1,318 receiving yards and 10 touchdowns while Murray quarterbacked the Sooners in 2018. Murray won the Heisman and became the No. 1 overall selection in the 2019 NFL Draft for his efforts.

Brown enjoyed a career-best campaign with the Ravens in 2021 by posting career-highs in receptions (91) and receiving yards (1,008, crossing 1,000-plus yards for the first time in his three-year career). Brown produced such numbers in a run-first Ravens offense. An opportunity to serve as Arizona’s No. 1 receiver for more than a third of the season in a significantly more pass-happy offense should lead to greener pastures for Brown from a production standpoint.

As far as what Brown’s eventual contract extension may look like, the four-year, $72 million contract former Cardinals receiver Christian Kirk signed with the Jacksonville Jaguars could serve as a starting point for discussions. Kirk has never produced a 1,000-yard campaign, however, so his representation could theoretically aim slightly higher than Kirk’s total and annual value. Brandin Cooks, who produced one less reception (90) and 29 more yards (1,037) than Brown did in 2021, recently signed a two-year extension with the Houston Texans worth $39.6 million with $36 million in guarantees. Cooks possesses a more complete body of work than Brown does, but their 2021 numbers were awfully similar in a what-have-you-done-for-me-lately league—oh, and Brown happens to be four years younger than Cooks. Brown’s current value would approach the $20 million annually mark Cooks falls just slightly under at $19.882 million.

Signing Brown to a similar extension could actually prove worthwhile for Keim and the Cardinals. Should Brown reach new heights in 2022 while thriving in Kingsbury’s high-octane offense that emphasizes speed, creativity, and space, the Hollywood, Florida native would gain even more leverage in negotiations. Another 1,000-yard season could see Brown’s values shoot up dramatically while the Cardinals would continue to lose leverage.

Additional factors behoove the Cardinals to begin thinking of Brown’s next contract immediately despite owning two years of roster control over him currently. Receivers such as D.K. Metcalf and Terry McLaurin are also seeking new contracts in occurrences that may further reset the wide receiver market.

As of now, a fair extension for Brown falls somewhere between the contracts signed by Kirk and Cooks earlier this offseason. It would possibly make Brown one of the 15 highest-paid receivers on an annual basis, depending on the impending outcomes for Metcalf and McLaurin. An average annual value of approximately $20 million for four years—an $80 million total value—with around 50% of that guaranteed would be a reasonable agreement for Brown and the Cardinals to reach.