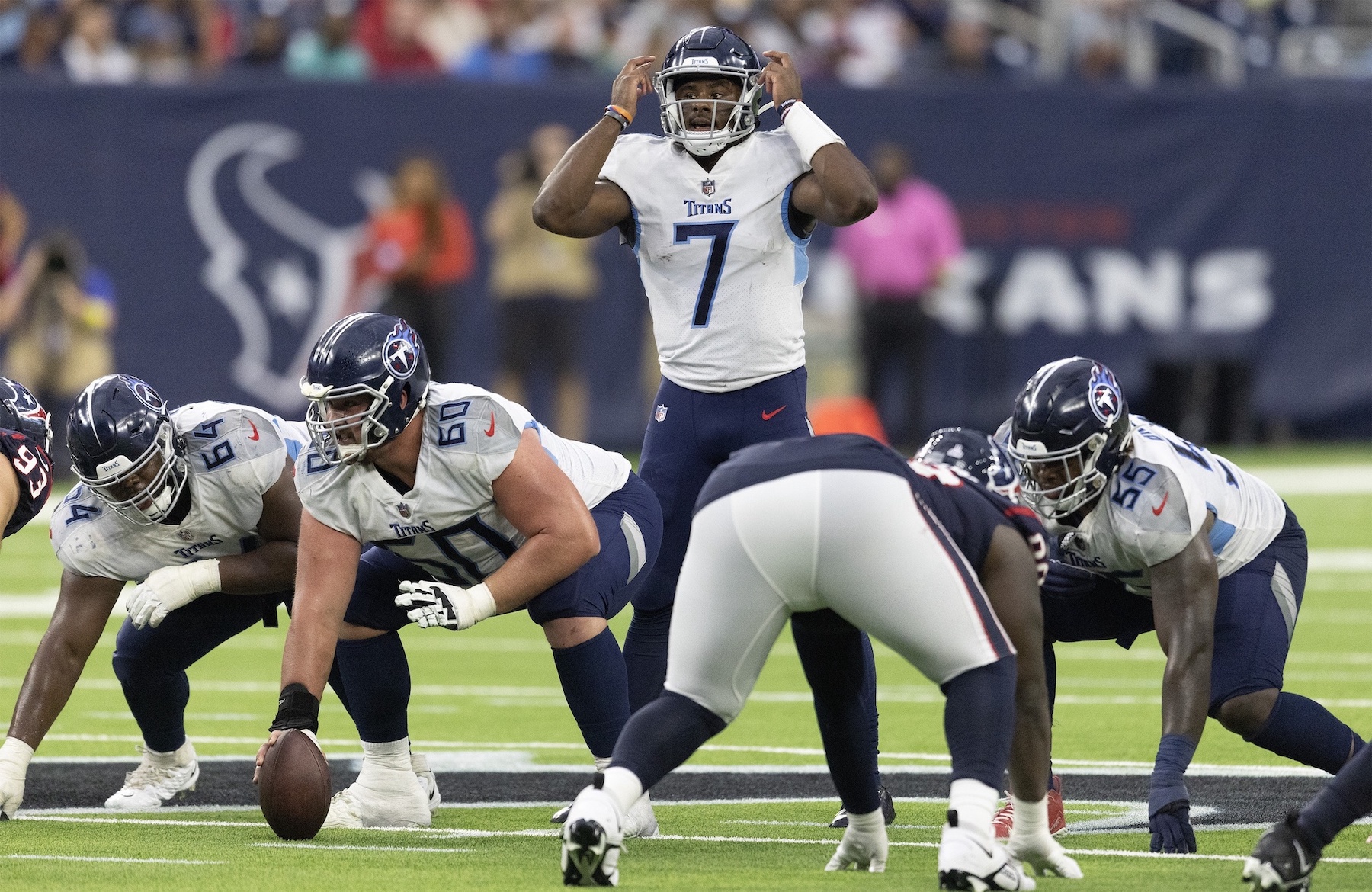 Tennessee Titans rookie quarterback Malik Willis received his first career start in place of an injured Ryan Tannehill on Sunday. The Titans claimed their fifth consecutive victory by defeating the Houston Texans 17-10 despite receiving few contributions from Willis. Willis isn’t ready to start in the NFL, and that’s OK.

The No. 86 overall selection in the 2021 NFL Draft, Willis completed just 6-of-10 passing attempts for 55 yards, zero touchdowns, and one interception. Willis added 12 rushing yards on five carries and was denied a rushing touchdown near the goal line. Tennessee’s offensive game plan looked to limit Willis’ opportunities. Willis attempted *one* pass in the second half—it was incomplete. Willis was more of a spectator than an active participant.

Willis’ interception came on a late read across the middle. Titans wide receiver Cody Hollister had created separation on a dig route across the middle. Willis held onto the football and allowed Texans defensive back Steven Nelson to recover. Nelson intercepted Willis’ late throw and the Texans scored three points on their ensuing possession. Willis was seen thanking his defensive line on the sidelines for limiting the Texans to a field goal.

Willis made other errors that limited Tennessee’s scoring output. Willis missed a wide-open Chigoziem Okonkwo down the sidelines. Sloppy footwork and a failure to reset his base led to Willis overshooting Okonkwo, who didn’t have a Texans defender near him. Okonkwo may have scored a touchdown had Willis completed the layup.

Willis curiously exited the pocket and flipped the ball out of bounds as opposed to running for 10-plus yards in the second quarter. Tennessee had been successfully executing their two-minute drill prior to Willis’ mental blunder. Willis was sacked on the next play, mercilessly taking the Titans out of field goal range. The Titans were forced to punt as opposed to attempting a field goal.

Willis was the beneficiary of an elite performance from running back Derrick Henry. Henry rushed for an astounding 219 yards and two touchdowns on 32 carries (6.8 yards per carry). Henry became the Titans’ all-time touchdowns leader by a running back (75), surpassing both Earl Campbell and Eddie George. The Titans rushed for 314 total yards. It represents the most rushing yards by any team in a single showing this season.

Tennessee’s smothering defense also bailed Willis out on several occasions. The inept Texans gained 64 total yards through their first 33 plays. The Texans were 2-of-14 on third down and managed 161 yards. Houston punted eight times. A meaningless fourth-quarter touchdown in the dying seconds made Houston’s performance appear slightly less pathetic.

Willis’ issues were the continuation of what the former Liberty standout put forth throughout the preseason. Willis remains an inexperienced and developing quarterback that doesn’t yet trust his decision-making process. Willis’ lower-half mechanics remain a work in progress and lead to stretches of inaccuracy. He flashed a willingness to go through his progressions, but Willis isn’t cutting it loose with the desired consistency.

The 5-2 Titans have rounded off five consecutive victories and sit comfortably atop the AFC South. They’re preparing for next Sunday’s primetime showdown with the fellow 5-2 Kansas City Chiefs. They’ll hope to have Tannehill back under center. Sunday’s showing indicated Willis is nowhere near supplanting Tannehill as Tennessee’s starter. He remains on the expected path that requires further development.