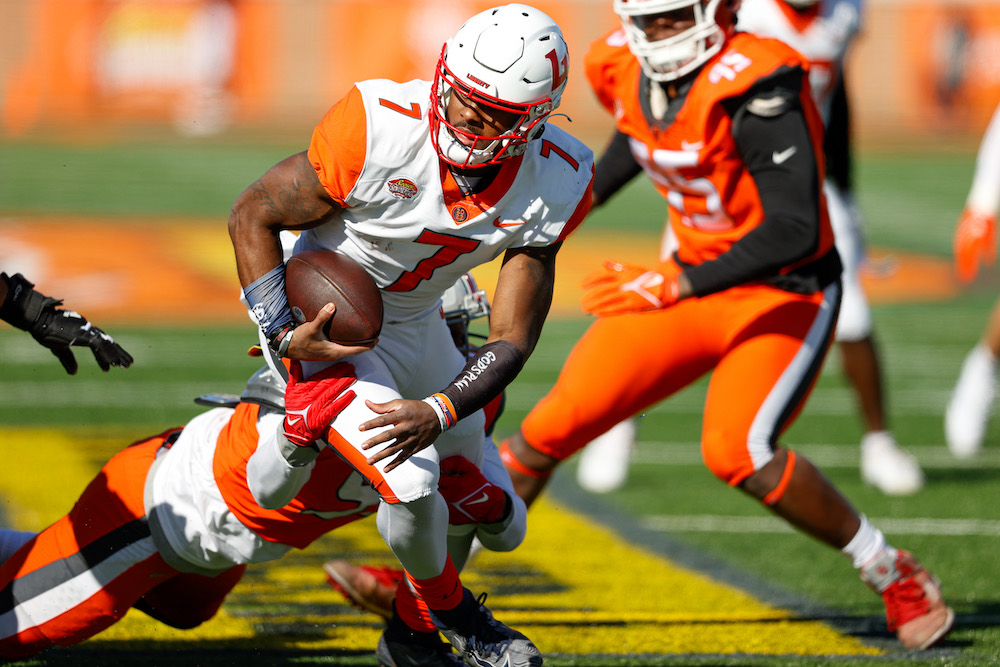 The race for the top quarterback in the 2022 NFL Draft has been fascinating to see play out. As the process moves along, it has become clear that the prospect with the greatest chance of becoming a legitimate difference-maker in the NFL is Malik Willis out of Liberty.

While there are quarterbacks that can stabilize an offense and give an opportunity to compete if surrounded by high level talent, Willis is one of those ‘X’ factor players that can win games for his team. He has the arm talent, mobility and intangibles necessary to develop into a high-level starting quarterback at the next level. His blend of arm strength and ability to utilize his athleticism is unmatched in this class.

Liberty’s up-tempo, spread offense with a modest supporting cast didn’t present the best of opportunities to showcase Willis’ skill set but his tape still has plenty of flashes that inspire plenty of excitement for how dynamic he can be at the position. With that said, Willis’ postseason process has truly separated him from his contemporaries. How he fared at the Senior Bowl, NFL Scouting Combine and his pro day has been a series of tests he has aced.

What I’ve really enjoyed in the process of scouting Willis has been chatting with his coaches to gain more insight on his approach and development. In conversations with Quincy Avery and Sean McEvoy, it’s clear that Willis has the makeup and work ethic of a quarterback that can be the face of a franchise.

With the big waves of free agency and major spins of the quarterback carousel now mostly behind us, the landscape of teams in the market for a quarterback in the draft has become clear. Barring a trade, the first logical landing spot is at No. 2 overall, where the Detroit Lions are scheduled to pick.

The Lions coaching staff had the unique opportunity to work with Willis at the Senior Bowl and gain perspective into his habits, leadership ability and skill set. That exposure puts Willis in play at No. 2, especially given the offensive line talent in Detroit with the addition of DJ Chark to the receiver corps, re-signing of Josh Reynolds and emergence of Amon-Ra St. Brown at wide receiver to go with tight end TJ Hockenson and a potent backfield. With quarterback Jared Goff in the fray, it creates an ideal situation for Willis to step into and play when he’s ready. Willis taking over for Goff could look similar to how Lamar Jackson replaced Joe Flacco with the Baltimore Ravens.

While I question if the Carolina Panthers should pick a quarterback at No. 6 overall given a volatile coaching staff and absence of an answer at left tackle as an ideal situation for Willis, they are in play as a landing spot. Perhaps Willis is exactly what Carolina needs to turn things around, but picking Willis feels a lot like Matt Nagy and the Chicago Bears trying to salvage his tenure by selecting Justin Fields, only to get fired nine months after the selection.

Two picks after Carolina are the Atlanta Falcons who hold the eighth overall selection. Fresh off trading away Matt Ryan and signing Marcus Mariota, the Falcons are clearly rebuilding and heading in a new direction as an organization. The Falcons roster is a work in progress with notable holes at wide receiver and in the defensive front seven with upgradable spots on the offensive line. All that leads to questions on if the Falcons are ready to usher in a top pick at quarterback but if they love Willis and he’s available, the talent could be too hard to pass up. With Mariota in place as the bridge, it takes the pressure off playing Willis right away and provides Atlanta with the opportunity to build up the supporting cast around the quarterback.

The Seattle Seahawks are next in line, picking one spot after the Falcons. Seattle recently parted with Russell Wilson leaving Drew Lock and Jacob Eason as the lone quarterbacks on the roster. The need to upgrade and find an appealing new direction at quarterback is clear and Willis is a candidate. The Seahawks have the skill players in place but need to find answers at offensive tackle. Should Willis be available at No. 9, he’d be tough for the Seahawks to pass on.

With four logical landing spots in the top-10, it’s hard to imagine teams outside of that range having a realistic shot at Willis unless they move up the order. If he does slide, Willis’ fall should not extend beyond the New Orleans saints at No. 18 or Pittsburgh Steelers at No. 20. The Houston Texans own picks No. 3 and 13 and should not be dismissed despite the belief that the team is moving forward with Davis Mills, a third-round pick from last year’s draft who performed at a reasonable level as a rookie.

‘Willis Watch’ starts at No. 2 and his basement is No. 20 but it’s unlikely to me he gets outside of the top-10. In a roller coaster of sorting out the 2022 quarterback class, Willis has emerged as the favorite to be the top player selected at the position. Now, it’s just a matter of how high and to what team. The good news for Willis is that there are plenty of suitors early come end of April.