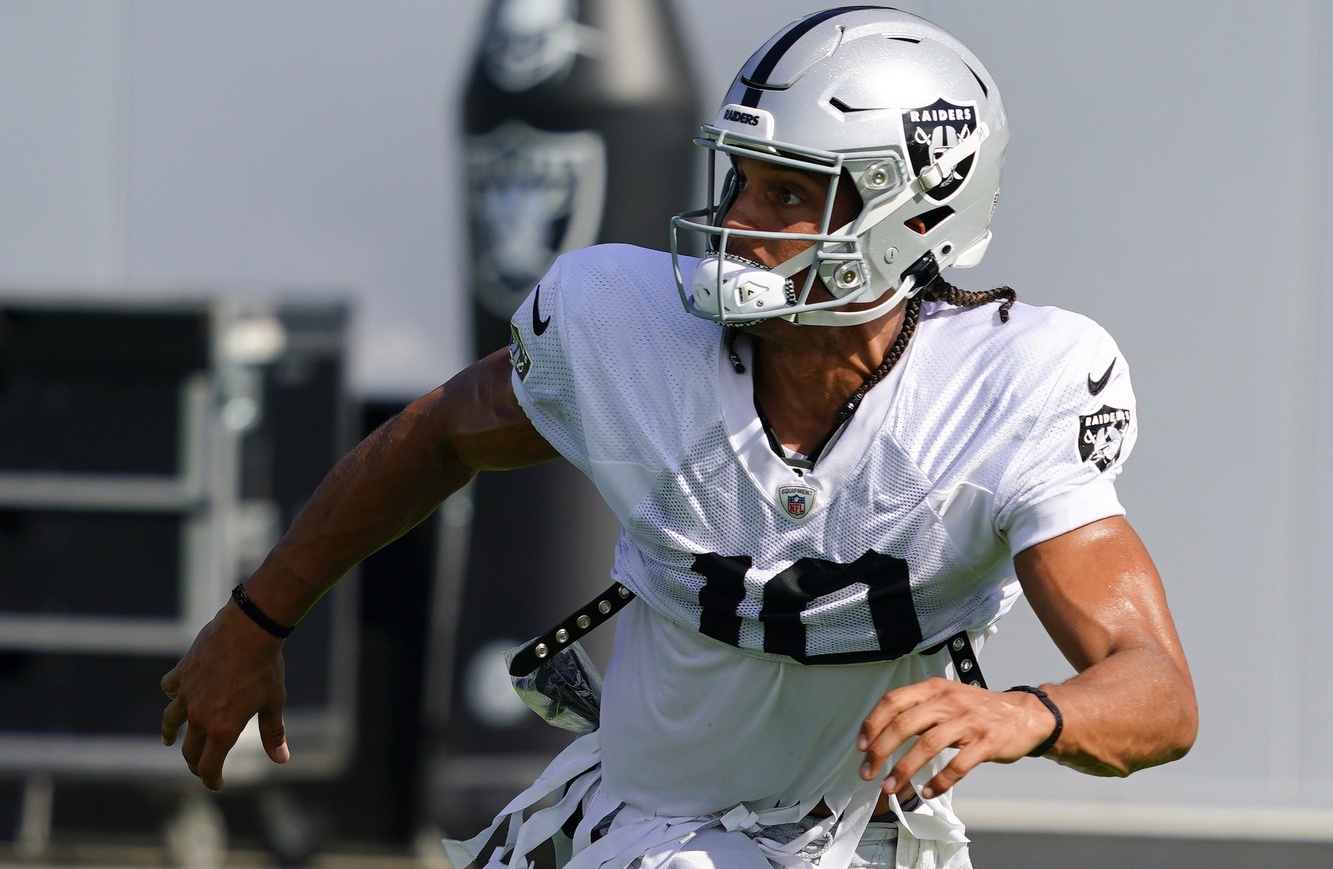 Football is back! Well… sort of. The Las Vegas Raiders and Jacksonville Jaguars will be suiting up for the NFL’s annual Hall of Fame Game on Thursday night, but many players from each squad will be absent. That’s why one of the names to look out for Thursday night will be Raiders receiver Mack Hollins, a free agent signee this offseason who’s competing for the No. 3 receiver spot in training camp.

Hollins (obviously) was not the biggest addition to the Raiders’ offense, nor the most important acquisition for their receiving corps. That honor always belonged to elite receiver Davante Adams, who came over in a trade with the Packers back in March. The fact that Hollins is and will continue to be outshined by the Adams move doesn’t make his addition any less important though.

Before Las Vegas’ offseason even began, it was very clear that getting more receiver help was high on their list of needs. Their leading receiver in 2021, Hunter Renfrow, was a 5-foot-10, third-year slot receiver. The second-most productive pass-catcher was tight end Darren Waller, who finished with 373 fewer yards than Renfrow’s 1,038 (that’s 665, for you anti-math folks) and 35 fewer targets.

Behind Renfrow and Waller, there wasn’t a lot to be excited about. Bryan Edwards had a few touchdown catches but fewer than 600 yards, and Zay Jones, who started to break out later in the season, still finished under the 550-yard mark and with only one score. The Raiders have since lost both Edwards and Jones in a trade and free agency, respectively, which only further emphasized their need for depth at receiver.

Adams was one piece of the puzzle. He joins the team as their clear No. 1 target, not only as the elite receiver that he is but also as quarterback Derek Carr’s former college teammate. Renfrow, meanwhile, will remain an important additional piece in the offense as the No. 2 receiver. But the No. 3 spot behind the two of them was still up in the air heading into training camp. Free agent additions Demarcus Robinson, Keelan Cole, and Hollins were battling for the last spot in Las Vegas’ starting trio.

So far, the early indications out of camp are that Hollins has pulled ahead with the strong impressions he’s made on both his teammates and coaches.

He’s a big-bodied receiver at 6-foot-4, 221 pounds, and Hollins can use that extra height to make plays over opposing defenders (or, in training camp, coaches with pads on their arms).

He also has shown in previous stops with the Philadelphia Eagles and Miami Dolphins that his size can make him a big help as a blocker in the run game.

Perhaps more impressive to those around Hollins so far has been his work ethic throughout training camp. Waller, fellow tight end Foster Moreau, and running back Josh Jacobs have all talked about participating in the “Mack Hollins Mile” during training camp, in which Hollins leads his teammates in a mile-long—and often longer—run after each practice, workout, and lift.

Hollins talked about how the tradition has just become a part of his mindset, that it represents his non-stop work ethic which carries into his time on the field.

That hard work and high motor combined with his skills as a bigger-bodied receiver make him a real threat to take over the Raiders’ No. 3 spot in the receiving corps before training camp ends. We’ll be keeping an eye on him Thursday night when Las Vegas takes the field for the first time this season against the Jaguars in the 2022 Hall of Fame Game.