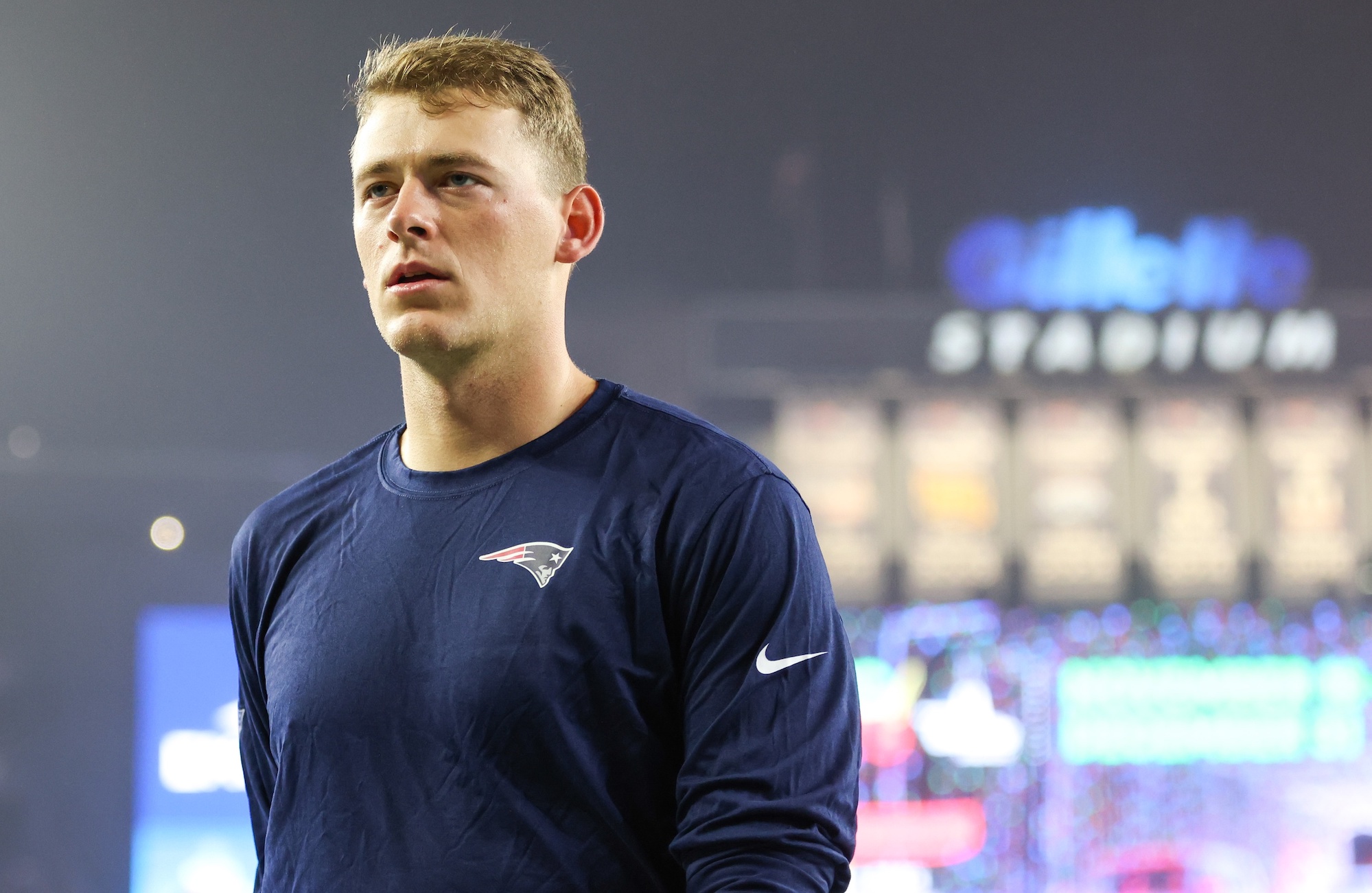 The New England Patriots benched starting quarterback Mac Jones in favor of rookie signal-caller Bailey Zappe during Monday night’s defeat to the Chicago Bears. Zappe entered the contest to the roar of the crowd and immediately led a struggling Patriots offense to consecutive touchdowns, giving New England a momentary lead. The shine wore off some during the second half, but New England looked like a more effective team with Zappe under center.

Jones was removed from the contest after throwing a back-breaking interception on his third drive. Jones finished 3-of-6 for 13 yards and the interception. Jones, who returned from a high-ankle sprain, now has just two touchdowns and six interceptions this season. Zappe, who led the Patriots to two consecutive victories prior to Monday, may be the Patriots’ preferred quarterback moving forward. Head coach Bill Belichick is staring down a franchise-altering decision.

Would the Patriots consider trading Jones? It’s clear Zappe has captured the support of the fan base. Jones’ future with the Patriots hangs in the balance. While a trade is more likely in the offseason, the upcoming trade deadline (Nov. 1) adds intrigue to the situation. We’ve swiftly identified three potential landing spots for Jones.

The 49ers were routinely tied to Jones once they acquired the No. 3 overall selection in the 2021 NFL Draft via an aggressive trade-up. Head coach Kyle Shanahan was allegedly overruled and the 49ers drafted Trey Lance instead. Fast forward to today and Lance hasn’t proven himself as a franchise quarterback. Could the 49ers chase a do-over by attempting to acquire Jones in the offseason?

Lance failed to outright win the starting job as a rookie. This season, Lance completed just 48.4% of his passing attempts and failed to throw a single touchdown before suffering a season-ending injury. Jimmy Garoppolo is currently starting for the 49ers but is essentially auditioning for his next gig via a reworked one-year contract.

The 49ers may have a new starting quarterback next season. General manager John Lynch isn’t afraid to execute a shocking trade, as proven by his latest deal for Christian McCaffrey. Jones to the 49ers will become a realistic possibility once the offseason marks its merciless arrival.

The Colts announced their intention to bench struggling quarterback Matt Ryan on Monday. Inexperienced sophomore signal-caller Sam Ehlinger will take over for the remainder of the regular season. The Colts will once again be in the market for a new starting quarterback.

Ryan’s salary-cap hit for the 2023 campaign is $35.2 million, via Spotrac. That includes $18.7 million guaranteed. Ryan will claim his guaranteed portion whether he plays a down or not, but the Colts will have to draft a quarterback or acquire one that remains on their low-cost, controlled rookie quarterback.

Jones is set to earn just $2.076 million in 2023 and $2.785 million in 2024. The fifth-year option is also available due to Jones’ status as a first-round selection. Colts general manager Chris Ballard may not be afforded an opportunity to make another quarterback decision given his less-than-desirable resume.

The Colts will consider all avenues. Jones may be viewed as an alternative option.

The Buccaneers are among the league’s most disappointing squads. Back-to-back losses to the Pittsburgh Steelers and Carolina Panthers have raised the level of concern to emergency levels in Tampa. Will 45-year-old quarterback Tom Brady return to the Buccaneers in 2023? Brady may be tempted by a change of scenery or retirement. General manager Jason Licht may have to pursue a new starting quarterback.

Licht worked alongside Belichick for years in Foxboro before climbing the ranks in Tampa. The two maintain a strong relationship today. Licht will possess excellent info on Jones as a person and quarterback.

The Buccaneers may be facing an immediate rebuild should Brady depart the franchise. Licht may not be in a position to draft one of the top quarterbacks in the 2023 NFL Draft such as Bryce Young, Will Levis, or C.J. Stroud. Trading for Jones would extend the Buccaneers’ competitive window.