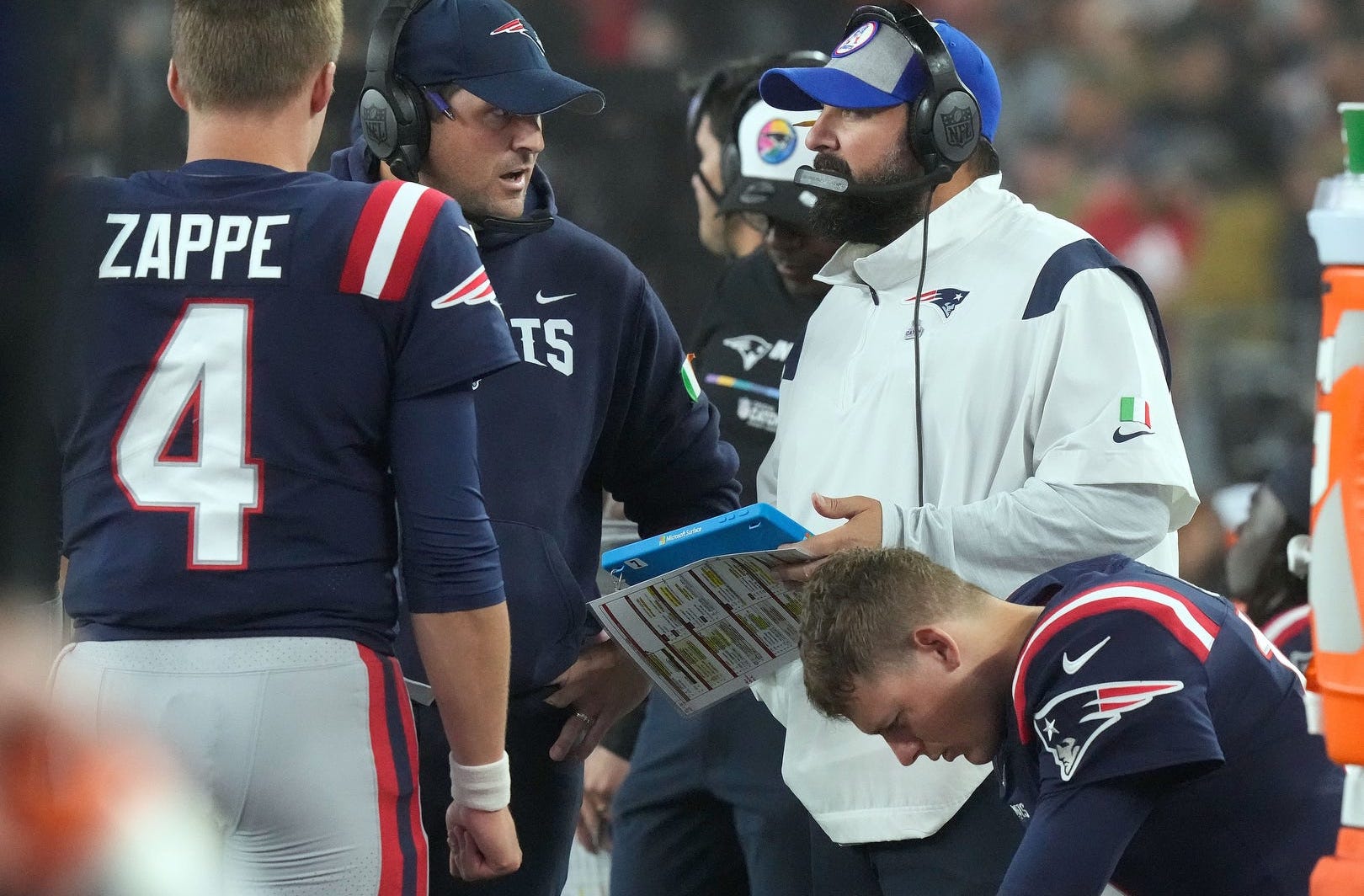 The New England Patriots’ defense is very good, but their offense is… not so good. Though New England is currently 7-6 and inside the playoff bubble, their offensive struggles are plenty of reason for concern.

In recent weeks especially, those struggles and potential internal conflict have entered the public eye thanks to quarterback Mac Jones’ outbursts directed at offensive play-caller Matt Patricia. But who really deserves most of the blame for all of those offensive issues?

Mac Jones just dropped what might be the most aggressive f bomb in sports TV history. pic.twitter.com/7h5N3zFAk7

Jones is the face of the offense as its quarterback and de facto leader, and he’s been having a worse year statistically in his second year than in his rookie season. He’s throwing fewer touchdowns, more interceptions, and his passer rating is down about seven points compared to where it was last year. That still doesn’t necessarily mean he’s at fault for what’s wrong with the Patriots’ offense, especially when considering all of the other factors.

One important factor is the loss of former offensive coordinator Josh McDaniels, who left to take the vacant head coaching job in Las Vegas. Last year, under McDaniels, the Patriots were the sixth-best scoring offense in the NFL and in the top half of all teams in total offensive yardage. They were also a top-10 team in offensive EPA/play. McDaniels’ system didn’t ask Jones to do a ton—a majority of his pass attempts were within 10 yards of the line of scrimmage—but he succeeded when called upon and finished above average in quarterback efficiency last season.

So after losing McDaniels, who helped construct an offense that made their rookie quarterback successful and pushed the team to the playoffs, the Patriots replaced him with… *checks notes* no one. Instead, New England ran with Patricia, their former defensive coordinator, as their new “senior football advisor” and offensive play-caller. It was a strange move at the time and already is not aging well.

With Patricia at the helm, the whole offense has sputtered. Jones currently has a negative EPA/play and is one of the worst quarterbacks in the NFL by that metric; he’s currently below players like Taylor Heinicke, Kenny Pickett, and even Russell Wilson. It’s not just Jones. The offense as a whole is 24th in the NFL in EPA/play and 26th in success rate. They are in the bottom half of scoring offenses and one of the 10 worst offenses in yards per game.

Why is that the case? What went wrong?

Well, for starters, in part due to their struggling offensive line, the offense is so reliant on short passes and screens. On Monday night against the Arizona Cardinals, Jones threw 12 screen passes, which accounted for nearly one-third (32%) of his pass attempts. For reference, that’s by far the most of Jones’ career, especially considering he had only two games with more than five such passes his rookie season. It was also the most attempted screen passes this season since Week 5, when Jalen Hurts threw 14

What was most damning about that approach was not just the lack of yardage they accumulated on those plays (4.8 on average) but how solid Jones was when Patricia allowed him to open it up a bit. On non-screen plays, the quarterback was 13-for-23 for 177 yards, an average of 7.7 yards per attempt. He even completed seven of his 11 attempts that went more than 10 yards downfield.

Another issue with the offense is the team’s inability to use all of their weapons effectively. To that end, their lead receiver (by receptions) isn’t actually a wide receiver, it’s running back Rhamondre Stevenson. By my count, New England is one of just two teams to target a running back more than any of their wide receivers this year. The other is the Los Angeles Chargers, who have Austin Ekeler, not to mention the slew of injuries to their top receivers this season.

Rookie Tyquan Thornton’s usage this year has been another head-scratcher courtesy of Patricia and the Patriots’ offense. Considering he was a reach of a second-round pick in the first place, likely thanks to his sub-4.3(!) speed in the 40, it’s frankly bizarre how little play he’s gotten all season as a vertical threat for the offense.

Thornton has had only six targets past 20 yards this season and is not even in the top 60 of all NFL receivers in the percentage of his routes that are “go” routes. With receiver Jakobi Meyers hurt entering the Monday game and DeVante Parker’s scary head injury during the game, it’s especially strange that Thornton didn’t get more looks. He finished the day with just five targets, catching four (the fifth was Jones’ interception) for 28 total yards.

Patricia deserves all of the blame coming his way (including from Jones) for how abysmal the offense has performed this year. The offensive play-calling has been far too conservative—even compared to last year—and it’s been holding Jones, the offense, and the team back. Even if a core reason for that is the poor play of the offensive line, Patricia is still at fault because, well, he’s also the offensive line coach.

What do we think Mac is saying here?

Between the overreliance on the quick game and the inability to use Jones and the weapons around him the right way to maximize production, New England’s offensive play-caller is clearly at fault. Jones proved he can be successful in the right system as a rookie, but this system has not been working.