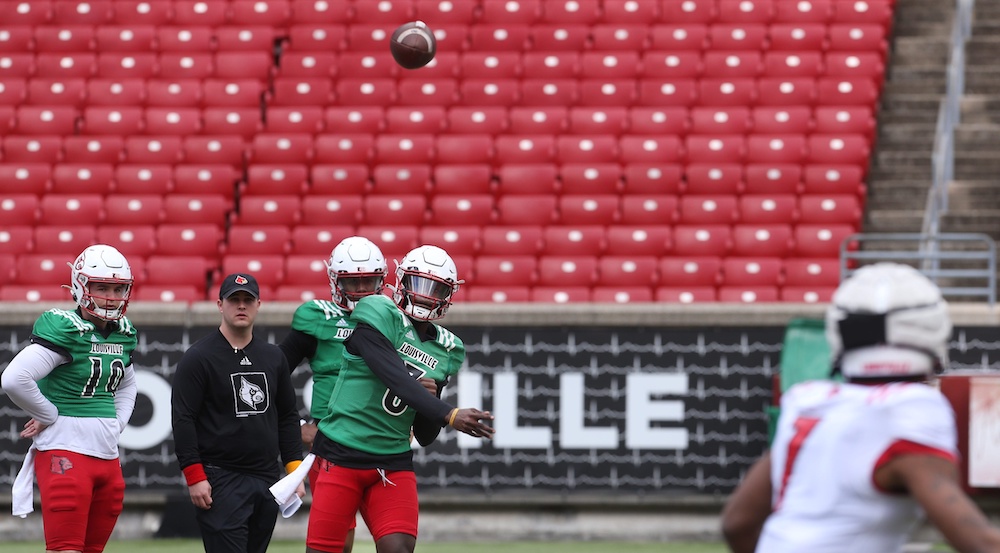 When it comes to Louisville running back Maurice Turner, don’t blink. He’s a product of Coffee HS – the alma mater of Miami Dolphins’ burner Tyreek Hill – and has drawn comparisons to the NFL speedster as such. Turner is now a part of a Cardinals program headlined by some of the most explosive athletes the country has had to offer over the last few years from Lamar Jackson, Jaire Alexander, Tutu Atwell, to current signal-caller Malik Cunningham.

A three-star freshman by way of Douglas, Ga., Turner is as dynamic as they come in the college game. While most of his touches will come as a running back, as Head Coach Scott Satterfield’s staff will look to get the ball in his hands as much as possible, he fits the modern trend of offensive skill player that transcends positions due to his speed.

Yeah, he can fly.

Recruited heavily by Cincinnati, Tennessee and a slew of other Power Five programs, it goes without saying the importance of having that type of weapon in a collegiate offense already known for its versatility. And while Turner’s elite speed should allow him to work into substantial snaps in his first college season, the progression of Satterfield’s playbook aligning Turner alongside Cunningham will present a case of pick your poison for opposing defenses to counter.

Make no mistake, Cunningham is still a pass-first talent despite the narrative of uber-mobile quarterbacks, who has shown the ability to dissect from the pocket and isn’t afraid to let it loose downfield. Cunningham totaled 19 passing touchdowns last fall compared to just six interceptions. Where Cunningham has shown his most improvement has been his fluidity and processing ability in the passing game. After a season in which his 12 interceptions could have amassed to many more in 2020, Cunningham’s comfortability in play-action and designed boots has seen an entirely different side of his game appear on film.

An excellent creator outside the pocket, Satterfield’s ability to get his quarterback outside the tackles with flow has been paramount to his development in four seasons. Cunningham is an excellent deliverer of the football on the run and his added ability to mirror his shoulders with his eyes before uncorking downfield is a massive plus when attempting to nail down his potential impact both in his final season, and moving forward at the next level.

While he’s best off-script, as the NFL quickly turns its focus to signal-callers that are multi-faceted with the ball in their hands, his foundational explosiveness with added weapons – like Turner – around him, will only allow Louisville to improve and reach their long sought after goal of double-digit victories – a mark that they’ve failed to meet since 2013.

From Rondale Moore, to Calvin Austin III, Turner could be the next premier offensive chess piece to hear his name called in due time. While we’ll have to wait until – at least – the 2025 NFL Draft to potentially hear his name called, he provides a skill set matched by few in the college game, and athleticism that will ‘wow’ early and often this fall.