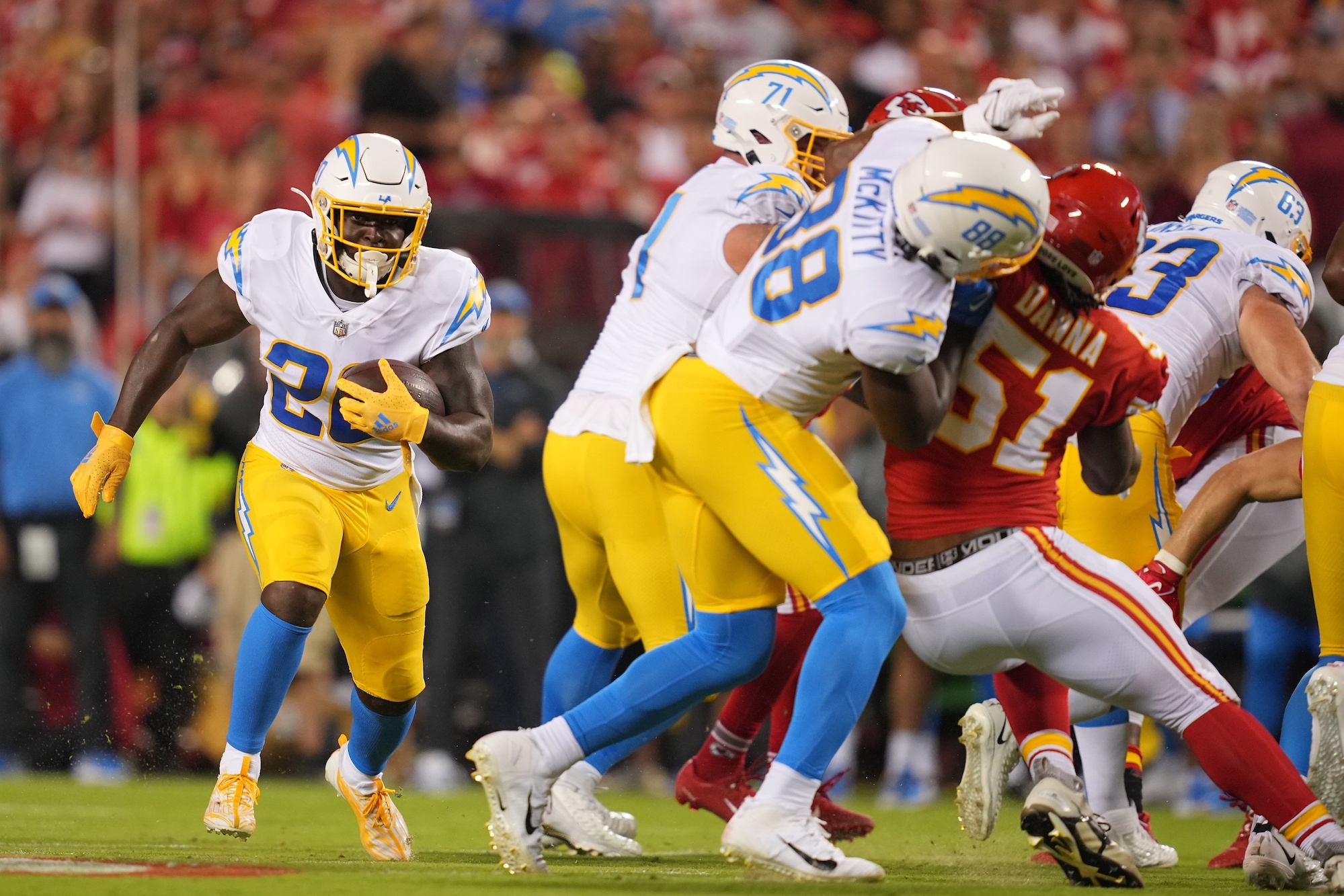 Chargers’ Run Game Showing Signs Of Life; Can Isaiah Spiller Add To It?

After entering Week 5 as the worst rushing attack in football, a 30-28 win over the Cleveland Browns could provide the fuse the Los Angeles Chargers need to round out their high-octane offensive attack.

A unit led by three-down talent Austin Ekeler and a variety of characters in Joshua Kelley, Sony Michel—and others—while Justin Herbert will continue to represent the wonderboy, poster child, and the face of the offense, the importance of Los Angeles to prove they can run the football with consistency will remain paramount if they want to reach their lofty goals of an AFC West title. A group that entered their matchup in Cleveland with the lowest total yards rushing (258), yards per carry (2.7), and just two rushing touchdowns, a dominant day from Ekeler against the Browns provided optimism for a positional group that has the bodies necessary to produce consistently on Sundays.

An undrafted talent back in 2017, you know who Ekeler is. A dynamic early-down talent whose pass-catching ability remains one of the best in football out of the backfield, a look under the surface layer of their running back depth chart showcases a talent that deserves an opportunity to compete moving forward.

A fourth-rounder out of Texas A&M in April, it’s been nothing but healthy scratches thus far for rookie Isaiah Spiller. A blend of burst and vision that anointed him for many within the industry as the top back in the 2022 class, his lack of playing time thus far from head coach Brandon Staley has been something to question—among other things. While Kelley and Michel have served as Ekeler’s reinforcements early on in the campaign, the production just hasn’t been there when their bellcow needs a breather. For Spiller, we’re not asking for 10 carries a game, but he’s a talent worth putting in uniform.

After using draft capital on a talent they knew would be a backup to Ekeler anyway, midseason adjustments often allow teams to reach their performance ceiling and Spiller deserves an opportunity.

6’0”, 217 with sneaky juice. He could solidify his status as RB1 with a standout performance. pic.twitter.com/k61G9GiArc

With snaps comes opportunity, and hungry dogs run faster. No, he won’t overtake Ekeler for carries, nor will he be an electric weapon in the passing game—just yet—but it’s time to take the tarp off the sportscar if you’re Staley. A talent during his time at Texas A&M that rushed for nearly 2,993 yards and 25 touchdowns (5.5 YPC) in three seasons in the SEC, his game checks boxes at the running back spot where his impressive skill set would present a new wrinkle to the Chargers’ game plan. A move that could heighten the impact within one of the league’s top offensive attacks, Spiller deserves some run.