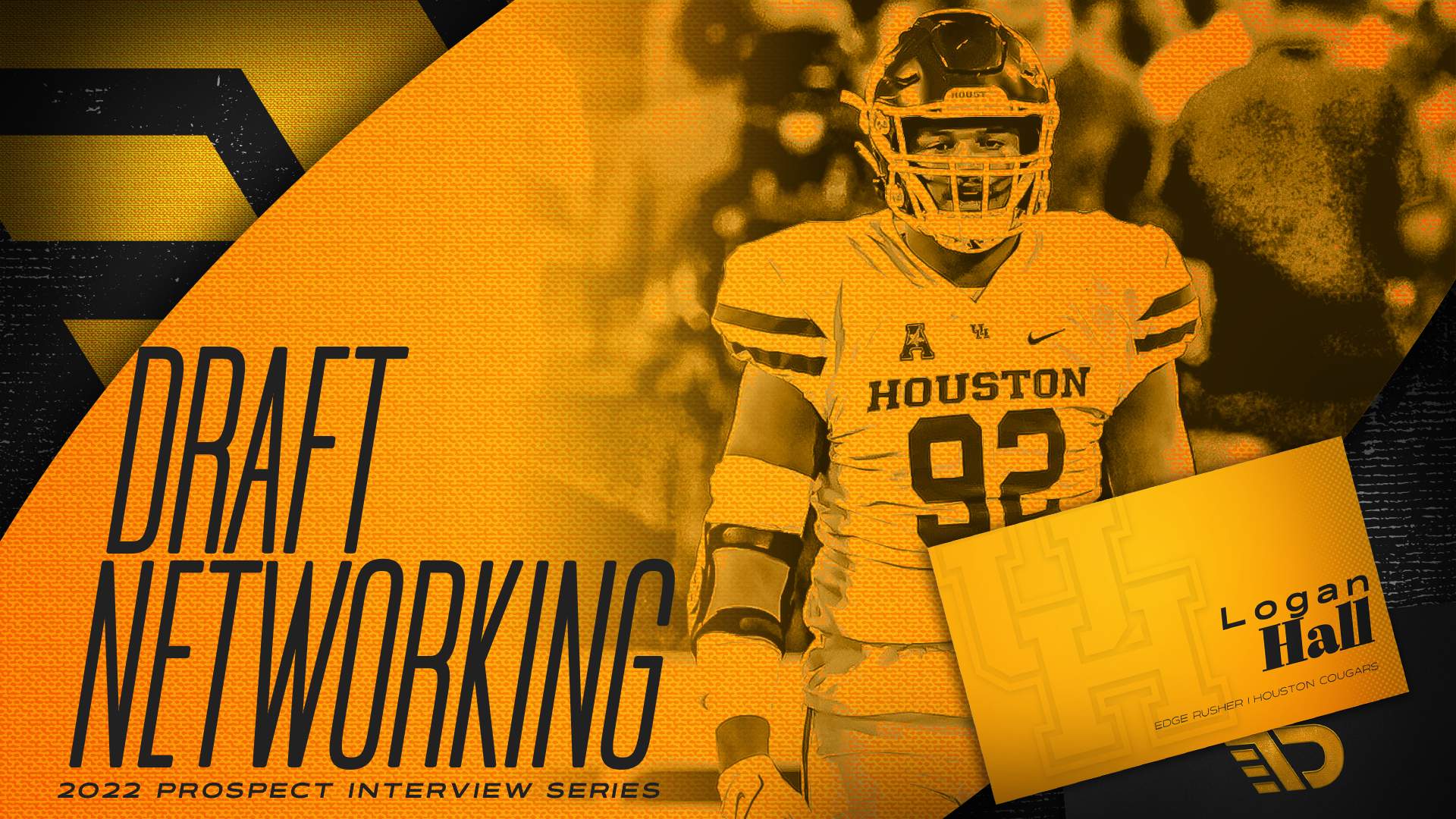 Houston’s Logan Hall is an ascending talent. One of the most versatile defensive linemen available in the 2022 NFL Draft, the Cougars created mismatches up front by allowing Hall to line up both inside and outside on any given down.

The Belton, Texas native is a long and energetic defensive lineman that threatened opposing pockets on a consistent basis all throughout 2021. Hall recorded career highs in sacks (6.5), tackles for loss (13.5), and total tackles (48) while appearing in 13 contests. As NFL defenses continue trending toward more multiple fronts, Hall will serve as a flexible asset at the next level.

Hall recently spoke exclusively with The Draft Network regarding his pass rush arsenal, how Houston utilized him within their defense, how he uses his stocky frame to his advantage, which professional pass rusher he would love to learn from, and so much more.

JM: You took a massive step forward this past season, having recorded career highs in sacks (6.5) and tackles for loss (13.5). What changed for you in 2021?

LH: I would point to my experience first and foremost, being that it was my fourth year within the program. Everything just sort of clicked and came together for me. The game slowed down a little bit for me. I was playing fast and physically. With Payton Turner having departed the program for the NFL, I had to step up and become that guy for us on the defensive line. All of those things played a role in the success I experienced this past season.

JM: All of that adds up. I want to talk about your pass rush arsenal because it excites me on tape. I’m looking for go-to moves, counters, and so on.

LH: First of all, I appreciate your kind words. I think I have a decent arsenal, but there’s always room for improvement. My go-to move is definitely the swim. Playing inside as a defensive tackle, I really enjoyed getting those guys in space and forcing guards to move their feet. I played both inside and outside. That’s been an amazing tool for me.

I use power rushes as well. Some people call it shake-power, or the stutter-bull. I use that as well. Occasionally, I might try to hit them with a chop-spin. I haven’t refined that move as much as I’d like to, but I’m working on it (laughs). I’d like to improve my entire arsenal and I’m working towards that. I can hit them with a cross-chop or a long-arm-swipe, things of that nature. I’m always trying to improve my game.

JM: We love watching you rush the passer on tape. Houston has developed so many NFL-level defensive linemen over the years. Guys like Ed Oliver and Payton Turner come to mind, and you’re next in line. What do you attribute that to within the program?

LH: It’s the culture, man. There’s no doubt about it. The way we train, the way we practice, there’s no doubt about the “why.” It could also be attributed to defensive line coach Brian Early. He does an amazing job preparing and improving us. When I first came in, my football I.Q. was horrible (laughs). Coach Early coached me up and got me ready. He got me right. I attribute a bunch of my success to coach Early.

JM: He sounds like a terrific coach. Houston lined you up all over their defensive line, playing both inside and outside, as you said. How did those experiences help prepare you for the next level?

LH: I think it made me the supreme asset. I played every position from zero to five-technique. It added a bunch of versatility and experience to my overall resume. I’ve played every position. I can fit into any scheme. When I get drafted, whatever my team asks me to do, it’s not going to be new to me. Whatever it is, I’ve done it at some point at Houston. I can add a ton of value that way.

JM: You certainly do. As a follow-up, where do teams predominantly see you playing in the NFL?

LH: I’ve heard several different things and ideas. It ultimately depends on my landing spot and their overall needs as a defense. I’ve had teams tell me they want me to play as a big defensive end, whereas other teams tell me they see me as a 4i. Some teams want me to play the three-technique. It depends on who drafts me. I’ve really heard everything throughout the pre-draft process.

JM: That makes sense. Your motor is always running red hot on tape. You show great effort and hustle on a snap-by-snap basis. How did you develop that mentality?

LH: It honestly comes quite naturally to me. If you go back and watch my high school highlights, you’ll see me running down on kickoffs trying to make a play (laughs). It started way back then. I talked a little bit about the culture at Houston, that’s the way we preferred to play the game, with our hair on fire. That was the standard that was expected from us. I always try to set the tone.

JM: You absolutely do. I’m curious to see if you’ll agree with my next point. Your hands appeared to be much more advanced in 2021 than they were in 2020. Where did that growth come from?

LH: It came from the experience. No doubt about it. That’s first and foremost. I’d also have to discuss the way we practiced. Coach Early was always ready to put in extra work with us. We stayed on the field after practice and continued working at our craft. I was constantly working my hands. It just improved naturally with repetition.

JM: Have you completed any virtual or in-person top-30 visits, and do you have any more coming up?

LH: I have, and I do. I have several Top 30 visits coming up, but the details must remain private at this time. My agent Drew Pittman has done a great job. I’ll essentially be making various visits within a week. I’ll be flying place to place, getting to know these teams, and they’ll be getting to know me as well. It’s been an amazing experience. It’s like a cross country tour (laughs) It’s been awesome.

JM: There’s a lot of interest in you and it’s easy to see why. Houston put you in positions to stuff the run and you did a great job consistently setting the edge. Talk to me about the mentality it takes to stop the run.

LH: I always wanted to be the hammer and not the nail. You want to initiate the contact and really strike your opponent. Maintaining and creating gap leverage, knocking back your opponent, all of these things go into being a high-level run stopper. I can’t say that enough. You have to fight for what’s yours in the trenches. If you’re knocking your opponent back, you’re going to set the edge. It comes with the territory. Coming out with that mentality helped me a bunch.

JM: If you could pick the brain of any defensive linemen in today’s NFL, who would you choose and why?

LH: I would probably go with Arik Armstead. We’re built similarly. We’re nearly the same size. I think we kind of play similarly on tape as well. I feel comfortable saying that. Watching his tape, you see him line up both inside and outside. I have a lot of questions I’d love to ask him. He can definitely teach me a lot. I would love to pick his brain and learn from him.

JM: That’s a terrific choice and I hope you get that opportunity. I’ve really appreciated your time today. I feel like this conversation has highlighted why you’re one of the most exciting and intriguing defensive linemen in the 2022 NFL Draft. In closing, what kind of impact is Logan Hall going to make at the next level?

LH: I think I’m going to make a huge impact during my rookie season. Being that I have that inside-outside versatility, I think I’m going to have a bunch of opportunities to get on the field all across the defensive line. The plan for me is to record six sacks as a rookie. That’s sort of like my goal. I chose that number because I had 6.5 sacks during my final season at Houston. I definitely plan to match and hopefully surpass that. We’ll see where it takes me.