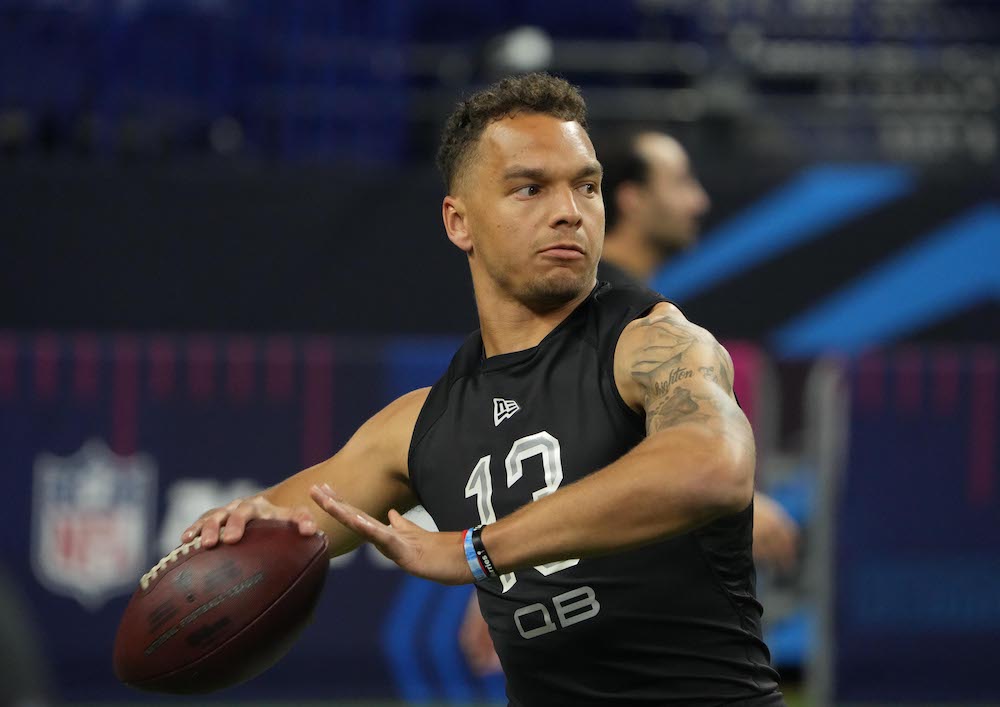 The Detroit Lions have suddenly become an intriguing team to monitor at the second overall pick in the 2022 NFL Draft. Smart money is on one of the top edge rushers being their selection, but I’m not 100% sold on that being the case.

Instead, I think the Lions can address needs along their defensive front in free agency. And to me, that leaves one obvious choice—the best player available—at No. 2 overall.

Who’s that going to be? Let’s check it out in this Detroit Lions mock draft.

There haven’t been many mock drafts with Kyle Hamilton coming off the board this high, and after his somewhat average 2022 NFL Scouting Combine performance, there probably won’t be too many moving forward. But I’m going to roll the dice on the Lions’ front office staying true to the tape and picking Hamilton, who has the best chance to be the biggest difference-maker in the entire 2022 NFL Draft. Hamilton is a defensive weapon who will quickly become one of the best defensive backs in the entire NFL.

Desmond Ridder proved at the Scouting Combine that he’s a plus athlete with the required arm talent from an accuracy and arm-strength standpoint to feel good about drafting at this point in the first round. Jared Goff will begin the 2022 season as the Lions’ starting quarterback, and there’s a chance he can prove next year that he is, in fact, the team’s long-term answer. But if he fails, having Ridder ready to take over is simply good business from a team-building standpoint. And if Ridder fails? Swing again on a quarterback in 2023.

The Lions hit on wide receiver in the 2021 NFL Draft with the selection of Amon-Ra St. Brown and they continue building out their depth chart with Jahan Dotson, a speedy playmaker with top-shelf after-the-catch ability. Dotson is considered by some draft analysts as a first-round guy, but I think he’s more likely to be a hot commodity at the top of day two.

Josh Paschal isn’t discussed among the top-tier EDGE or defensive line prospects in the 2022 NFL Draft, but he’ll bring a high-character approach to the game that will provide value both on and off the field. There’s no doubt Paschal can contribute right away as a rotational defender. He’s a tough dude who’s overcome a lot in his life; he’ll level up the culture inside a locker room.

The 6-foot-2, 200-pound cornerback brings size and experience to the NFL and will be a fit for teams who want physical corners who can bull receivers in their route. The Lions’ secondary always seems to be in a state of flux, so adding Martin Emerson in round three provides another option in an endlessly unsettled depth chart.

The Lions are set at running back with D’Andre Swift, who, if he stays healthy, should emerge as one of the NFL’s top all-around running backs in 2022. But every starter needs a good backup and Hassan Haskins starred as a physical banger for the Wolverines. Lions fans will welcome a Michigan prospect with open arms, and Haskins has enough natural ability to earn starter’s reps in the NFL. Adding him as RB2 is a really good value.

Reggie Roberson Jr. is an appealing downfield playmaker who offers a different skill set than both St. Brown and Dotson. Roberson is a straight-line speed player who has a chance to be a nice third-level target that can complement the rest of the Lions’ depth chart well.

Every team should draft at least one offensive lineman every year, regardless of the roster’s current makeup. And that’s what the Lions do here with the selection of Tyler Vrabel, whose father, Mike, is the head coach of the Tennessee Titans. Vrabel is a long ways away from being an NFL starter, but if any prospect in this year’s draft knows what life in the NFL requires, it’s a coach’s son.

Nick Muse didn’t boast a ton of production during his time at South Carolina, but he’s a decent route-runner and after-the-catch performer. He won’t make his living in the run game, but as a depth option behind T.J. Hockenson, the Lions could certainly do worse.

The 6-foot-4, 330-pound Neil Farrell Jr. isn’t a star in any one area of his game, but he brings experience and surprising athleticism to the next level. If he can get stronger and become a more consistent defender against the run, he’ll have a chance to stick around on the practice squad and the occasional game-day roster.