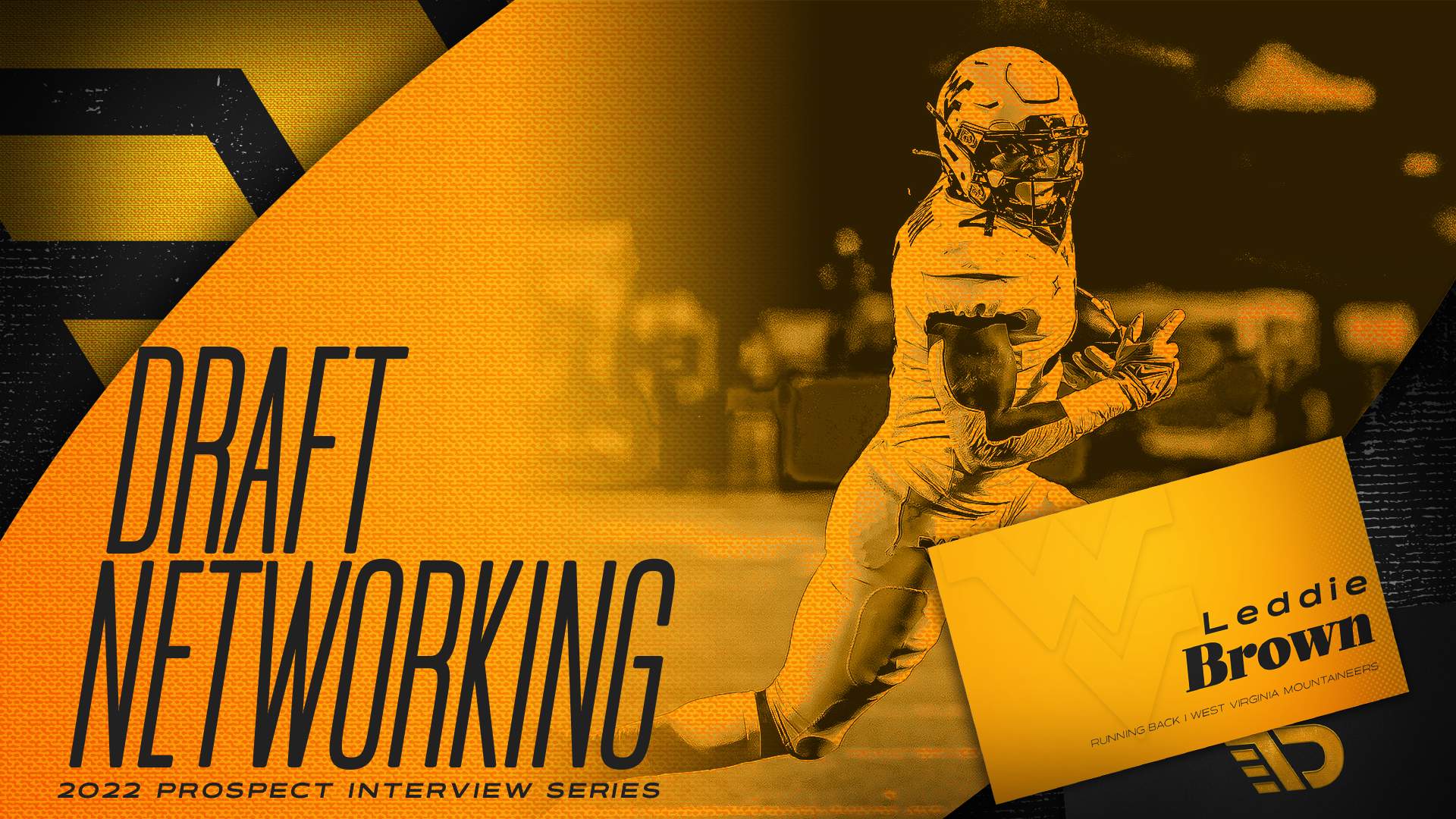 West Virginia’s Leddie Brown developed into one of the most impactful and productive running backs in the Big 12 over the previous two campaigns. Brown has strung together back-to-back 1,000-yard seasons while establishing himself as the Mountaineers’ bellcow and most trusted option in the backfield. Brown is an extremely physical and tough-natured ball-carrier that can carve out a role for himself in the NFL.

Brown recently spoke exclusively with The Draft Network regarding his impressive collegiate career, how he developed into the no-nonsense ball-carrier we scouted on tape, his skills as a pass-catcher, what his NFL Scouting Combine experience was like, why the city of Philadelphia molded him, and so much more.

JM: You were incredibly consistent at West Virginia, and that’s especially true over your past two seasons. Across that timeframe, you totaled 2,075 rushing yards and 25 total touchdowns. How do you reflect on your career at West Virginia?

LB: When I look back on my career at West Virginia, I’m not going to lie to you, It was rough at first. I had to fight through ankle injuries throughout my first two seasons at WVU. Once I got fully healthy, my career began taking off. I had excellent junior and senior seasons. I developed a great relationship with my running backs coach and he helped get through everything I was going through. His three years there were so helpful to me. I have to thank him for helping me get through everything while helping take my game to a whole new level.

JM: He sounds like a terrific coach. You became extremely productive under his watchful eye. When we turn the tape on, we see a no-nonsense runner that initiates and welcomes contact. How did you develop that mindset as such a physical runner?

LB: I was born and raised in Philadelphia. It’s a rough city. I’ve had that mindset my entire life. I had to grow up fast. I’m just that type of person. When I step on the football field, I don’t think there’s anyone better than me. That’s how I approach the game every time I step onto a field to compete. I’ve been that way since I was playing at the youth level.

JM: It shows on tape. Today’s offenses place a ton of emphasis on utilizing running backs that can catch the ball coming out of the backfield. You recorded 86 receptions at West Virginia. Tell me about your skills as a pass catcher and how comfortable you are with that going forward.

LB: Catching comes naturally to me. It’s not something I’m afraid of doing or anything like that. It’s well within my element and skill set. I actually played the receiver position during my junior year of high school. Playing seven-on-seven during middle school and high school, I was always asked to catch the ball. Running routes and catching the ball comes naturally to me.

JM: You’re a natural on film. What was your overall experience like at the NFL Scouting Combine?

LB: It was a dream come true for me. I felt like I was 16 years old all over again. When I was younger, I used to dream about playing at a D-I school and getting an invite to the combine. I’m here now. It flashed before my eyes and I was going through the combine experience. Time flies. I had a great experience. I met, and spoke with some really great people in Indianapolis.

JM: We loved watching you there. If you could pick the brain of any running back in today’s NFL, who would you choose and why?

LB: I would choose Alvin Kamara. I love the way he’s so smooth within his movements. He has terrific contact balance as a ball-carrier. He runs great routes and he catches the football at such a high level. He’s an all-around playmaker at the end of the day. He can run in-between the tackles, he can run outside the tackles. I would love to ask him about his progressions throughout the duration of a play. I would also ask him about his mindset going into a game and how he prepares for his next opponent throughout the course of the week. I would basically love to understand how he does the things he does.

JM: That’s a great choice. We hope you get a chance to pick his brain. I’ve really appreciated your time today. Why should a team use one of their draft picks on Leddie Brown?

I’ve been extremely reliable. I didn’t miss a single game. I had two back-to-back 1,000-plus-yard seasons while doing it. I’m a three-down back. I’m a natural catcher of the football and a natural, every-down runner. I’m a back that can also pick up those tough yards when you need me to.