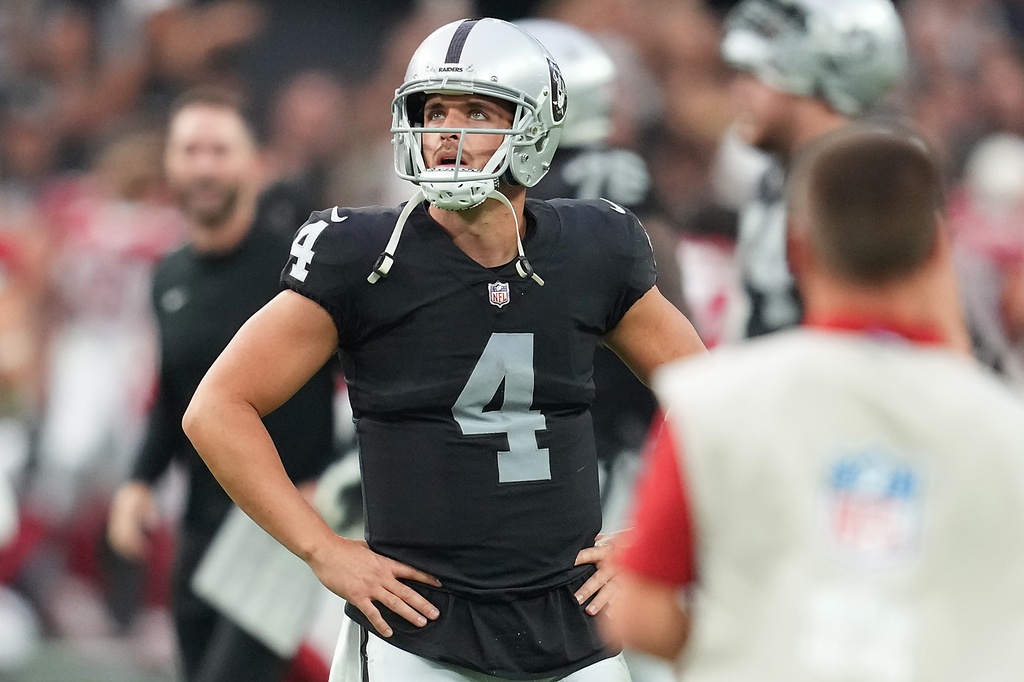 Is Raiders’ Season Really Over?

It’s no question that the Las Vegas Raiders are off to a very disappointing start to the 2022 season. Their 1-4 start with the talented offensive playmakers they have is the definition of underperformance so far, and it’s left us with one simple question: is their season over?

The Raiders are clearly facing an uphill battle to contend for the playoffs with the position they’ve put themselves in. Teams that start 0-3 have a tough path to a playoff spot by default, as only six teams of more than 180 to start 0-3 since 1980 have made the playoffs. Since the turn of the century, only the 2018 Houston Texans started 0-3 and then clinched a playoff berth.

There are plenty of reasons for the early season underperformance. The offensive line has been a huge mess with eight different players already having more than 90 snaps across the O-line. With that much inconsistency, it’s been impossible for their front five to gel as a cohesive unit, and quarterback Derek Carr is sniffing the top 10 in sacks and QB hits as a result. The finalized starting offensive line has started to take steps forward in recent weeks, but they’re partly to blame for the tough start.

At the same time, new head coach and passing offense guru Josh McDaniels has really struggled to get the passing offense clicking, even after the team brought in an elite receiver in Davante Adams. Running back Josh Jacobs has been excellent this year, and he’s a big reason the Raiders’ offense ranks just outside the top 10 in total yards and eighth in scoring. But even with a solid quarterback plus Adams and Hunter Renfrow—a guy who was 10th in the NFL in receptions last season—Las Vegas has just been a middle-of-the-pack passing offense so far this year.

Defense has been a problem too. Edge rusher Chandler Jones is still stuck at zero sacks, one tackle for a loss, and five QB hits while Maxx Crosby has been carrying the team with his six sacks. Without a super-productive pass rush, the Raiders’ defensive backs have been getting burned to the tune of 256 passing yards allowed per game. Las Vegas ranks in the bottom five in points allowed and has already blown two 17-plus-point leads this season.

To put it simply, things have not been going great. But does all of this mean their season is over?

It does not. Not yet, at least. There are several reasons the Raiders still have a chance to turn things around and make the playoffs, even after such a rough start to the season.

For one, there are signs of things turning around. The offensive line has been improving and will get more chances to take steps forward in the weeks ahead. At the same time, Carr seemed to be finding his rhythm again with Adams, his former college teammate. The two connected for a couple of long touchdown passes on Monday night, and Las Vegas might have come away with a win if not for McDaniels’ strange call to go for a two-point conversion late in the game. Things were certainly clicking for the Raiders against the Kansas City Chiefs, and their ability to stick with a team of that caliber means something, even if it still counts as an “L” in their record.

For two, their schedule going forward gets easier. Their three games after this bye week are against the Texans, New Orleans Saints, and Jacksonville Jaguars—three teams with losing records and ones that mostly lack the high-caliber pass-rush attacks of other teams the Raiders have already faced. That could give the offensive line a chance to boost their confidence and cohesiveness even further by the second half of the season.

Speaking of the second half of the season, the Raiders don’t have to play a single team currently in a playoff spot until Weeks 17 and 18 against the San Francisco 49ers and Chiefs, respectively. The Los Angeles Rams, their Week 14 opponent, could move into a playoff spot by then, but the Indianapolis Colts, Denver Broncos, Los Angeles Chargers, New England Patriots, and Pittsburgh Steelers have all been struggling this season.

This brings us to the third point: the AFC playoff field is a lot shallower than many of us believed ahead of the season. The Colts and Broncos are a total mess—last week’s Thursday Night Football was plenty enough proof of that—yet Indianapolis is on the bubble for a playoff spot at 2-2-1. The reigning AFC Champion Cincinnati Bengals have a losing record as they floundered against a couple of solid teams in recent weeks, and the Chargers, who were hyped up in the preseason as Chiefs dynasty-beaters, are struggling too.

Despite a slow start, things are better than they may seem for the Raiders. If they can keep their passing offense clicking at the rate it was in Kansas City earlier this week, Las Vegas can start to win some of these close games that they’ve been losing. (The situation Adams finds himself in now may make that more difficult, though.) Getting more production out of their defense would help that case as well.

Turning more of these one-score games into wins is key, and once they manage to string together a few wins coming out of their bye week, they won’t be too far out of the playoff picture. Remember, last year’s 49ers squad started 2-4 and were a losing team as late as Week 10 before surging into a playoff berth and eventually an NFC Championship Game appearance. It really is not too late for the Raiders to be able to right the ship and turn things around in time to recover from their early-season woes.