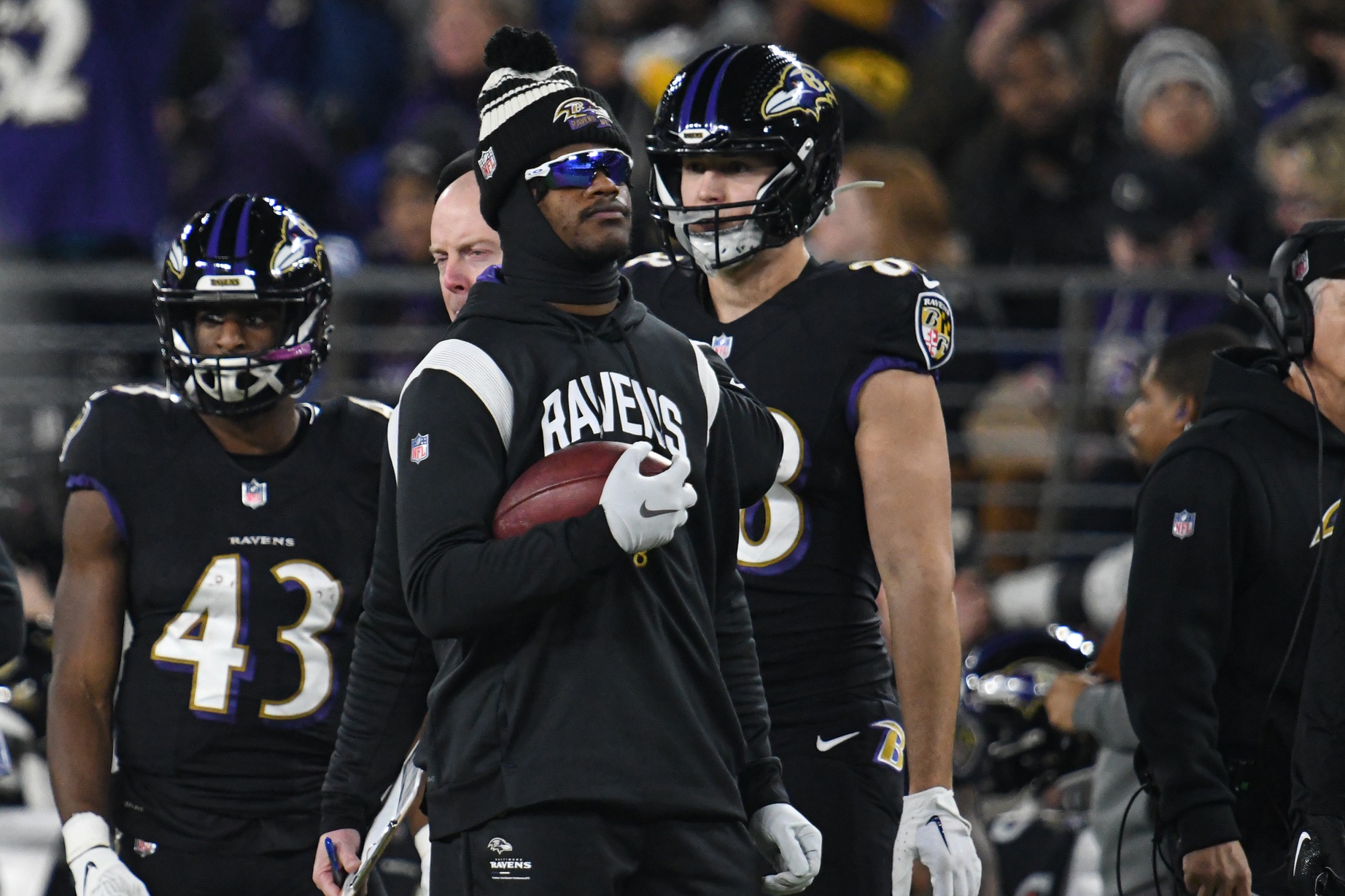 Should Ravens Be Worried About Lamar Jackson’s Playoff Status?

Baltimore Ravens starting quarterback Lamar Jackson did not practice on Wednesday and isn’t expected to practice on Thursday either. Jackson appears doubtful to play against the Cincinnati Bengals on Sunday. The Ravens should officially be concerned about Jackson’s availability throughout the postseason.

“I’m probably going to leave all that stuff (Lamar Jackson’s injury and postseason availability) alone,” Harbaugh said, via the team’s website. “I’m going to focus on the [Week 18] game and just get ready to coach our guys and have our guys get ready to play the game.”

Sunday’s contest could decide the AFC North division title. Jackson’s unlikelihood of suiting up for such a crucial meeting on Sunday adds to Jackson’s concerning lack of availability.

The 10-6 Ravens have already clinched a postseason berth. They’re currently the six-seed in the AFC and are ironically on pace to play their divisional foe Bengals in the wild-card round, which would mark a second consecutive contest against the Bengals following Week 18. If Jackson isn’t healthy enough to face Cincinnati during the regular-season finale, his status for the postseason officially hangs in the balance.

Backup quarterback Tyler Huntley appears primed to start against the Bengals in Week 18. Huntley would be Baltimore’s preferred signal-caller in the postseason should Jackson remain on the mend. A former undrafted free agent out of Utah, Huntley has completed 75-of-112 passing attempts (67 percent) for 658 yards, two touchdowns, and three interceptions. The Ravens haven’t taken the training wheels off for Huntley, who is averaging just 5.9 yards per passing attempt. A dual-threat quarterback, Huntley has added 137 rushing yards to his offensive totals.

It’s difficult to envision the Ravens making noise in the AFC playoffs sans a healthy Jackson. They can’t beat Joe Burrow, Patrick Mahomes, Justin Herbert, or Josh Allen without Jackson. Even the Tennessee Titans or Jacksonville Jaguars would relish a first-round matchup with a Jackson-less Ravens.

Jackson’s injury also adds an intriguing layer of mystery to contract negotiations. Jackson, who represents himself, has failed to reach an agreement with the Ravens on a contract extension despite varying negotiations taking place for 12-plus months. He earned a fully-guaranteed $23.016 million via the fifth-year option in 2022 and is currently scheduled to become an unrestricted free agent, per Spotrac. Jackson is looking to become one of the highest-paid quarterbacks in football via a long-term contract that pays him $40-plus million annually with $150-plus million in guarantees.

Jackson’s negotiations with the Ravens have already been complicated. When Jackson misses Sunday’s contest against the Bengals, he’ll have played in 26 of a potential 34 regular-season contests across the last two campaigns. Jackson’s new-found injury concerns further muddies contract discussions.

The Ravens have already qualified for the postseason. The chances of them reaching their Lombardi-related goals depends solely on Jackson’s health and availability. All signs indicate there’s legitimate cause for concern.