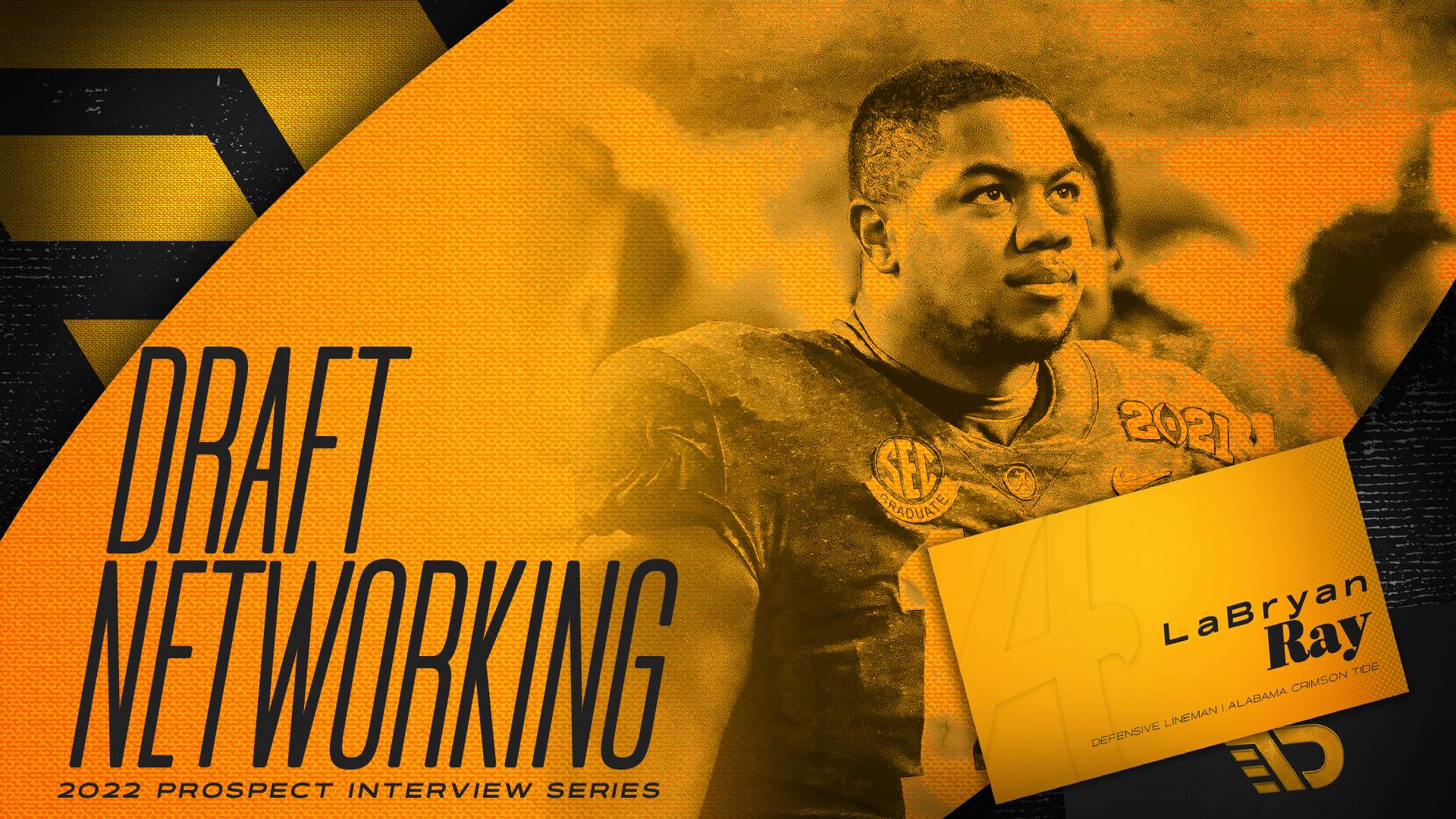 Alabama’s LaBryan Ray is one of more intriguing defensive line prospects available in the 2022 NFL Draft. A former 5-star recruit, Ray’s collegiate career was unfortunately cut short due to injuries. Ray learned valuable lessons throughout his time at Alabama and is now ready and healthy to attack the next level.

Ray recently spoke exclusively with The Draft Network regarding his experience at the NFL Scouting Combine, what it was like to play for coach Nick Saban, his pass rush arsenal, why a team should use one of their draft picks on him, and so much more.

JM: Playing for Alabama is a blessing. What was the biggest lesson you learned throughout your time at Alabama?

LR: After being there for five years, there are a few lessons and experiences that come to mind. My main takeaway was to always pay attention to the smaller details. It’s extremely important. When you’re a younger guy coming in, you tend to focus on the larger areas of the game. When you begin maturing and you really start thinking about it, it’s the small things that become the difference between winning and losing, and whether you succeed at something or not.

I would definitely single out paying attention to the details. You have to put some emphasis on that. A lot of younger players don’t realize how much that matters. I’m telling you that makes the difference between coming out victorious or not. If you’re not doing that properly, you won’t get the results you’re chasing after. That’s the main thing I learned at Alabama.

JM: That’s a great point and that’s definitely something you learn at a prestigious program such as Alabama. What was your experience like at the NFL Scouting Combine?

LR: I had a great experience there. My interviews and medicals, they all went great. It gave me a chance to see a lot of people I hadn’t seen in years, and an opportunity to build some new relationships as well. The experience in itself was great. I was living in the moment because I’ve always dreamed about going to the combine. I’ve always watched it on television and paid close attention to it. To be there was truly special.

JM: It’s such a special event. What was your No. 1 takeaway from the combine?

LR: I would say my biggest takeaway was how much opportunity it presents for you to get in front of all 32 teams and begin building those crucial relationships. It’s a great chance to improve your draft status. I didn’t partake in the physical aspect of the combine, but I felt great about how my interviews went. It gave me a chance to focus on that aspect of the combine. I definitely made the most of my time there. I was thankful for the opportunity they gave me.

JM: The interview process at the combine is so important. You talked about the little details. Coach Saban is a special individual and leader who places a ton of emphasis on that. How would you describe what it’s like to play for coach Saban?

LR: It was a great experience. I was born and raised in Alabama. I had an opportunity to watch so many of his legendary teams over the years. I was so blessed to be a part of that. When the chance presented itself and coach Saban offered me a scholarship, it was a dream come true. I worked for it, but you still feel blessed and shocked to receive such an opportunity. At the same time, it was something I always wanted to be a part of. I was ready for the moment and I spent five years there.

I learned so much from coach Saban. He taught me how to handle adversity. I learned so many great and valuable lessons. It was a time for personal and professional growth. He definitely helped me a lot. It was a great experience for me.

JM: He’s a special coach. What’s your favorite aspect of playing on the defensive line?

LR: Playing at Alabama, they asked us to play so many different positions. We had to be versatile. They never wanted to label us as being guys that could play just one position. You have to be able to play all across the defensive line in Alabama’s scheme. It was one of those things I just had to do, and I learned a lot while doing it.

I love being versatile, and I love playing different positions on different downs. I love learning new techniques and applying myself. It’s all about adding different wrinkles to your game and becoming a better football player.

JM: We saw that versatility. Are you more developed as a pass rusher or run stopper at this point in time?

LR: I think I’m a balanced player in both areas. I could stuff the run and play a few different positions on early downs. I’m also somebody that can get after the quarterback in obvious passing down situations. I feel like I’m a player that can do multiple things for a defense. I’m stout against the run and I can get after the passer as well. I can do a combination of both.

JM: You’ve battled through some injuries but you appear to be getting healthier by the day. Where are you at from a health perspective right now?

LR: I’m doing well right now. I can’t complain about where I’m at right now. I feel great. I’m training hard and getting ready for what’s next. I’m attacking this pre-draft process. I’m continuing to prove myself as I get myself back to the place I was at.

JM: We wish you the best of luck. I’ve really appreciated your time. In closing, why should a team use one of their draft picks on LaBryan Ray?