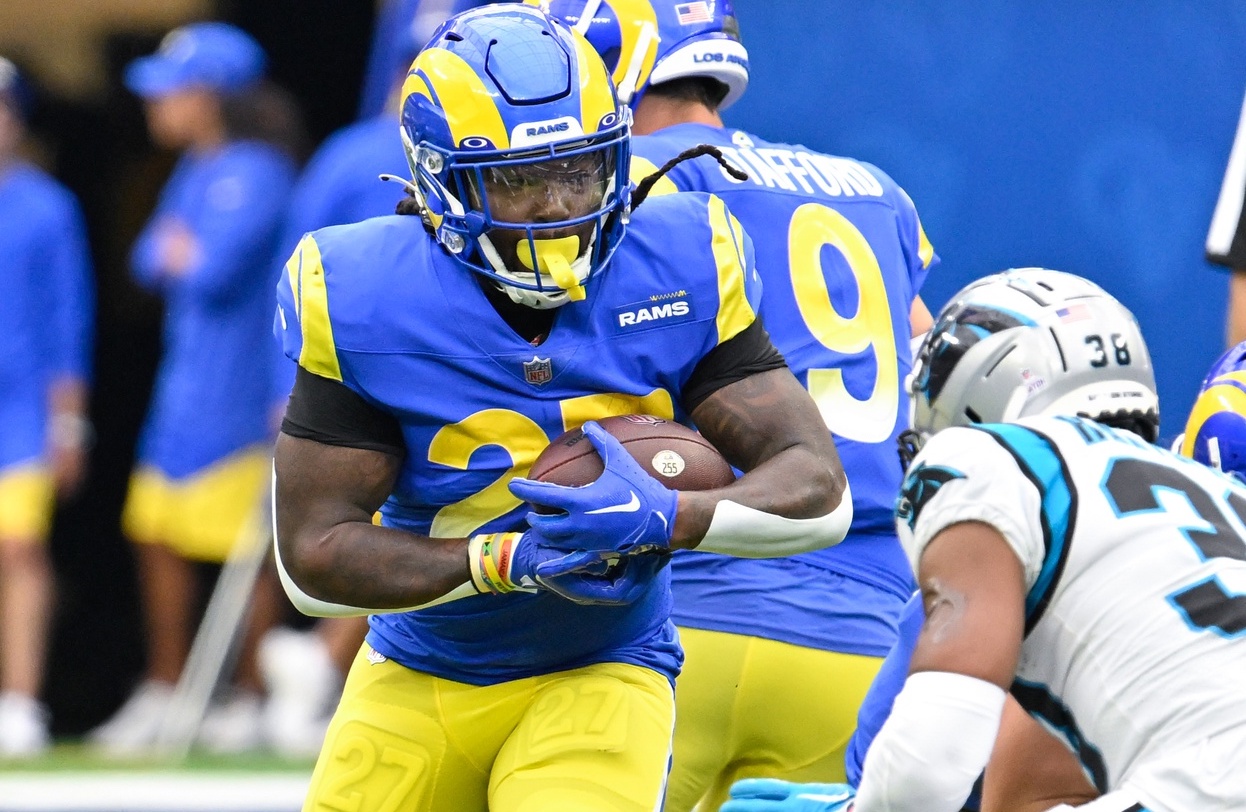 Is Kyren Williams Poised For Major Impact In Rams’ Backfield?

The Los Angeles Rams designated rookie running back Kyren Williams to return from IR by triggering his 21-day practice window on Wednesday, according to reports. Williams won’t feature for the Rams this Sunday against the San Francisco 49ers but is clearly nearing a return from injury. Williams appears poised to capture a legitimate role in Los Angeles’ backfield.

Williams’ impending return marks perfect timing. The Rams and fellow running back Cam Akers are working through some football-related differences that are expected to end with Akers being traded or released. Akers’ situation will soon be resolved with the NFL trade deadline (Nov. 1) fast approaching. Akers has seemingly played his last down in a Rams uniform. It immediately catapults Williams near the top of the Rams’ ball-carrying depth chart.

Williams may find himself in a timeshare alongside the struggling Darrell Henderson Jr. Henderson hasn’t proven capable of serving as the Rams’ workhorse despite a golden opportunity being provided to him in the wake of the Akers situation. Henderson has rushed for just 181 yards and two touchdowns on 46 attempts. He’s averaging a rather pedestrian 3.9 yards per carry. Henderson hasn’t topped 47 rushing yards in a single showing this season.

Henderson has been held to 27 yards or less in three of his six appearances. Sean McVay’s ineffective rushing attack is currently ranked 31st across the league (70.5 yards/game). The Rams’ downgraded offensive line is partially to blame for their run-game struggles, but Henderson isn’t creating opportunities for himself either. Henderson has forced just four missed tackles this season, via Pro Football Focus. He’s accounted for a grand total of three explosive (10-plus yards) rushes.

The Rams have tried getting Henderson involved in the passing game but to little avail. Henderson has secured 14 receptions for just 77 receiving yards. He’s averaging a mind-bogglingly low 5.5 yards per reception—it’s an area Williams should have little resistance immediately dethroning Henderson.

Williams was an excellent pass-catching back at Notre Dame. Across his final two campaigns with the Fighting Irish, Williams totaled 77 receptions for 672 receiving yards and four touchdowns. The Rams could desperately use the services of Williams right now. McVay should take advantage of Williams’ abilities by scheming quick throws coming out of the backfield. That would allow quarterback Matthew Stafford to release the ball in a timely and efficient manner behind an offensive line that’s struggling to pass protect. Williams is also excellent in pass protection and shows a terrific willingness to stonewall blitzing defenders. Stafford will appreciate his toughness.

Williams can be more than a third-down back for the Rams. He was a workhorse for Notre Dame, enjoying back-to-back 1,000-yard campaigns in 2020 and 2021. Our in-house pre-draft evaluation of Williams indicated he was suited for a wide zone system that allows him to attack vacant gaps. It makes Williams an ideal fit for McVay’s preferred tendencies.

The Rams’ anemic rushing attack desperately requires a jolt in the arm. Uber-aggressive general manager Les Snead may consider acquiring a back before next week’s trade deadline (Nov. 1) reaches its conclusion. Snead shouldn’t feel the need to part with additional draft capital to rescue his team’s dwindling rushing attack, however. Williams possesses every trait necessary to upgrade the Rams’ offense.