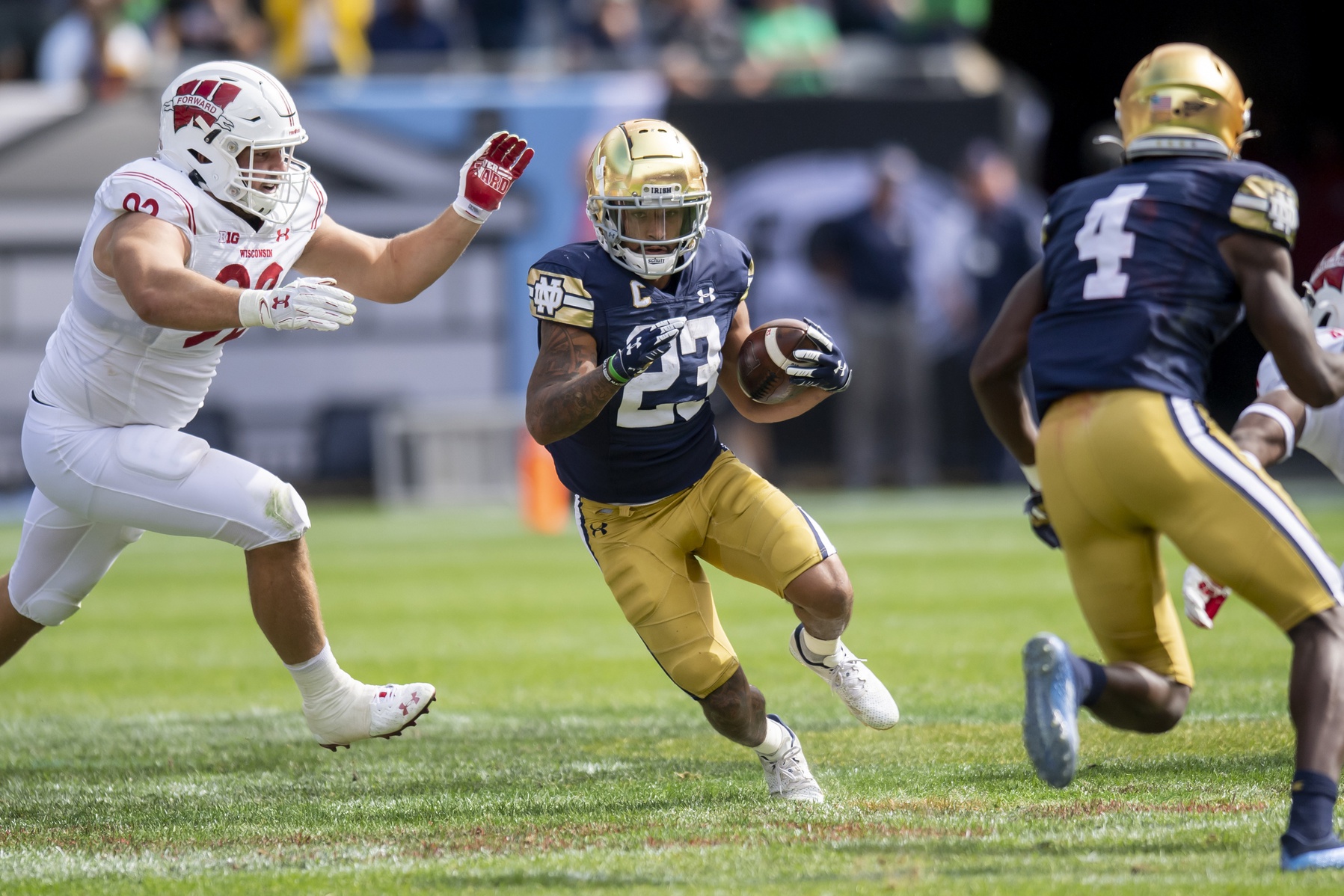 Kyren Williams Is More Than Just A 3RD-down RB

Notre Dame running back Kyren Williams refuses to be classified as exclusively a third-down back—so don’t do it.

A third-down back is usually a guy who primarily specializes in entering the game in third-and-long, passing-down situations because of their strong abilities as a pass-catcher or in pass protection. They generally aren’t the guys who are big, strong, workhorses like Derrick Henry or Jonathan Taylor that get tons of carries each week.

Williams is a running back who is exceptional in everything that would normally make him a third-down back. He’s one of the best pass-catching running backs in this draft class, and he very well could be the best at the position in pass protection.

The fact that the Notre Dame product has those skills is great. Williams spoke about how it made him a complete running back that uses his receiving and blocking abilities as a complement to his running. He sees having all of those skills together as what separates him from any other running back in this class, and it’s something he takes pride in.

What might hold Williams back, however, is his size.

He’s listed at 5-foot-9 and 199 pounds, which would make him smaller than some of the top running backs in this class. Texas A&M’s Isaiah Spiller, Michigan State’s Kenny Walker III, Iowa State’s Breece Hall, and Alabama’s Brian Robinson Jr., among others, are all taller, bigger options at the position.

Williams not having that same size while being strong as a pass-catcher and in pass protection could pigeon-hole him into a role as a third-down back. That won’t happen, not if he has anything to say about it.

“I don’t like hearing that. When I would hear that, I would emphasize me being an all-down back, being able to get in the slot first and second down,” Williams said Thursday. “Then on third down, if you need me to run inside the tackles or run outside the tackles or even pass pro, I could do that too. I just see myself as a complete back on all downs.”

Williams is definitely more than a pass-catcher, even if that is a big part of his game. As a runner, he characterized himself as a ‘freestyler.’ Despite his size, the Notre Dame product isn’t afraid of contact. He often challenged would-be tacklers by lowering his shoulder and driving through initial contact in his college career. Williams is also pretty shifty, and he uses his size and quick reaction time to slip out of tackles and pick up extra yards.

The Fighting Irish didn’t shy away from using Williams early and often in sets of downs. He found plenty of success rushing on early downs too, averaging 5.1 yards per carry on the first two downs.

When he was used as an extra pass protector, he used a lot of the same mindset as he did rushing up the middle on early downs.

But again, don’t you dare tell him he can only be a third-down back. Williams will be the very first to remind you that he is a complete back that can play all downs. If you doubt that, look at his film. He points out that certain games—against UNC, USC and Clemson—best showcase all of his talents. On one play, he might be bursting up the middle on fourth down for the first down, on the next, he’s breaking open a 91-yard run, crossing up defenders as he makes his way down the field.

So yes, Williams is great on third downs with his pass-catching and blocking abilities, but that isn’t all he is as a player.

Williams is out to prove he can truly do it all. Doubt him at your own peril.