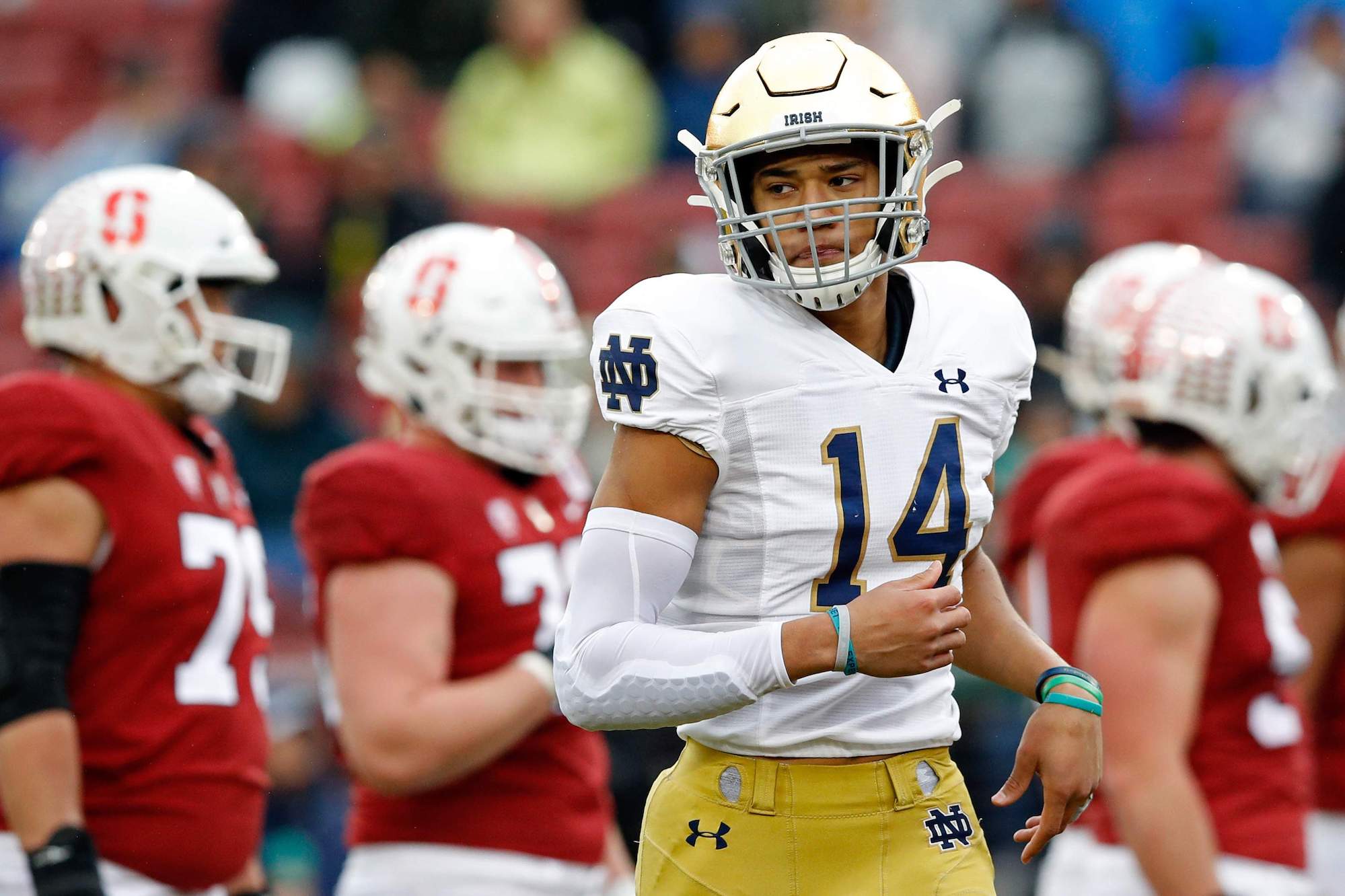 What Makes Kyle Hamilton So Dynamic?

The premier prospect available this cycle, while Notre Dame’s Kyle Hamilton likely won’t see his name come off the board first, don’t let positional need fool you: he’s player one. An otherworldly blend of athleticism, football IQ, and unlimited versatility, Hamilton has introduced a one-of-one talent with the necessary skill set to completely revamp a defensive unit. A well-framed prospect at 6-foot-4 and a tick over 220, Hamilton leaves no box unchecked as a defender that can roam the ceiling, creep down as a robber at the second level, and isn’t afraid to stick his nose in as a downhill run defender near the LOS. Let’s dive deeper into what makes Hamilton so unique. https://twitter.com/_RyanFowler_/status/1493973938241785859 Aligned in a two-high safety shell, Hamilton finds himself on top of the opposite hash at the snap. As the play begins, he opens his hips to the inside to account for both the seam-stretching tight end and outside receiver. However, the moment the play begins to break down and Florida State quarterback Jordan Travis escapes from the pocket, almost simultaneously, Hamilton plants his foot in the ground making a beeline to the sideline. In what was nearly a 30-yard sprint, his ability to range over to the opposite side of the cover area and not only pursue the football but record an interception falling out of bounds is a play NFL teams have had on replay since the fall. It was really a herculean display of athleticism and simply not normal, folks. That amount of range, closing speed, and the presence of mind to make a play on the football after aligning on the field side hash at the snap? Otherworldly. In an NFL game that has continued to become increasingly pass-happy as the seasons wear on and teams attempt to keep up with the Patrick Mahomes’ and Josh Allens’ of the world, a talent like Hamilton not only has talent evaluators drooling over his potential as an apex playmaker but has become a necessity to counter the high-flying aerial attacks of the pro game. From Jordan Poyer to Kevin Byard to Jessie Bates III and Derwin James, a credit to those athletes, but none compare to the fundamental athletic profile that Hamilton possesses—the former Notre Dame standout is just different. Teams atop the draft in Jacksonville, Detroit, and Houston, as it stands, look set on adding either an offensive tackle or edge rusher, which could see Hamilton slip past the top three. But with arguably the highest floor and highest ceiling of any player in the entire class, it’s OK to simply draft good football players if you’re an organization without the luxury of picking and choosing your spots to add pop *ahem* Jacksonville, Detroit, and Houston. Labeled the unicorn of the class, line him up man-to-man on a wideout and he has the mirroring ability and arm length to discombobulate any route stem. Need a run defender? Place him anywhere and allow his elite processing skills to diagnose the gap before the ball-carrier works upfield. A player with as refined a game as you’ll see in the class, teams that pass on Hamilton to fill a positional need, while understandable, could look back to the 2022 draft as a missed opportunity to select an athlete that will enjoy a high level of success from the moment he steps onto NFL-branded turf. A bonafide star who will add an alpha mentality to any defense he joins, Hamilton is as sure a thing as a sure thing will come. My advice to the NFL: don’t get cute.