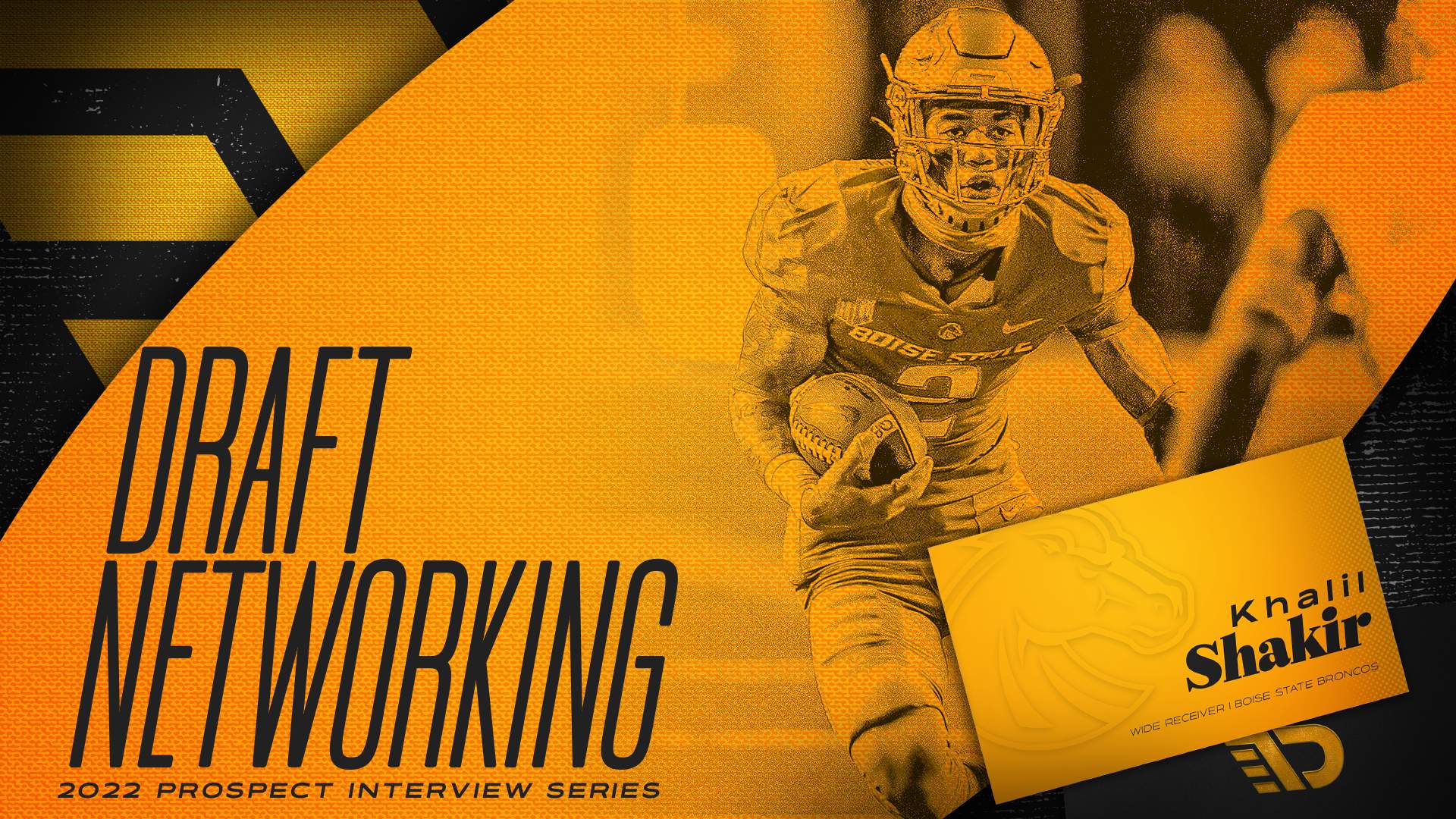 Boise State wide receiver Khalil Shakir has won the NFL pre-draft process thus far. Shakir showcased his quick-twitch abilities all throughout practices at the Senior Bowl, often dominating the cornerbacks that dared to line up across from him. Shakir then went to the NFL Scouting Combine and ran an official 4.43 in the 40-yard dash and later broad jumped an impressive 124 inches. Shakir is now a receiver prospect that’s very much on the rise.

Shakir recently spoke exclusively with The Draft Network about his performance and experience at the combine, which teams have shown interest in him throughout the process, his favorite route to run, what he feels is the best game he ever played at Boise State, and so much more.

KS: I would point to how my coaches prepared me and the time they invested in my continued development at Boise State. They did so much for me from a preparation and practice standpoint. They spent time making sure I was ready to make big plays for our offense when the time came. They’re the reason why I put up those numbers. It was all them, and it was all of my teammates as well. They helped me build confidence with myself to go out there and play at a high level. We played off of each other. They helped me get open and vice versa. Our success was shared as a team. That’s what helped me achieve those numbers. There’s no doubt in my mind.

JM: You then went to the Senior Bowl and fared extremely well throughout the week. What did you make of that experience and how you performed against cornerbacks from bigger programs than what you typically saw at Boise State?

On top of that, I feel like I went out there and proved myself. I proved that I could play at that level with other guys from other conferences. I competed at the same level with guys from the biggest programs and conferences in the nation. It was a blessing to get out there and run with those cornerbacks while catching passes from those quarterbacks.

That whole process was happy. I was thrilled to have received that opportunity.

JM: You’ve aced this entire pre-draft process. You ran a blazing 4.43 at the combine, and you also showcased your explosiveness by broad jumping 124-inches. What was your combine experience like?

KS: It was a lot of fun. Coaches asked how I was doing and how I was handling the craziness of the week, and I told all of them the same thing. I’m blessed to be here. Not a lot of people receive an invite to the combine. It was a terrific experience. I’m so happy to have been a part of that.

From the moment you get there to the moment you leave, you’re on the go. It can be easy for somebody to overlook the process or sit there and complain about not having any time off, but it really is a blessing. I soaked up the experience while taking in every single second spent there. I was happy to have the opportunity to go to Indianapolis. It was a chance for me to showcase myself and my personality beyond football. I was talking to teams and showing them who I am as a person outside of football. That was the biggest blessing I could have asked for.

I showcased my talents out there. I was prepared by the best. I’ve been training at XPE down in Fort Lauderdale with Tony Villani and Matt Gates. Those guys got me right to go out there and perform from a combine-prep standpoint to a speed training standpoint. The numbers proved that they prepared me in the best manner imaginable.

JM: Do you feel like you improved your draft stock in Indianapolis?

KS: When it comes to me and the whole draft stock deal, I don’t pay any attention to that stuff. I just keep my head down and grind. No matter what’s been said, I call it the world of the unknown.

We’ve seen guys who are perceived to be first-round talents drop to the later rounds in recent years. You just don’t know. Nobody but the teams themselves has a clue. I try to keep my head out of that staff while continuing to work and improve my game. God has me at the end of the day. I’ll end up exactly in the place I’m supposed to be.

JM: That’s one of my favorite answers I’ve ever received to that question because it’s so true. The interview process is also an important part of the combine. Which teams did you meet with formally, and how do you feel those interviews went overall?

KS: Between the Senior Bowl and the combine, I’ve essentially met with all 32 teams in some capacity. It’s hectic. You speak with these teams for what may feel like a long time. You get three hours of interviews but you spend just 15 minutes with each team. You’re always on the go. From the moment you finish one meeting, you’re getting up and heading straight for the next meeting. You don’t even have enough time to take in that you just met with that specific team. You’re already onto the next meeting.

I’ve been blessed to speak with all 32 teams throughout this process. I’ve had those opportunities to get in front of those teams and discuss my life story. It pretty much gives you a chance to sell yourself as a person, and not just a football player with a helmet and jersey number. It goes beyond what you see from me on game day. I’m a down-to-earth person that loves playing football. I love getting out there and balling out with my teammates, my brothers. Aside from that, I really wanted teams to get to know me as a person. I’m a caring, team-first guy. I’m a guy that’s always looking out for my brothers to the left and right of me. I’m that person that always wants to make sure that everybody around me is OK.

It was a blessing to showcase my personality to all 32 teams. In terms of my interviews, I’ve really enjoyed every single one of them. I’ve loved this entire process.

JM: There’s a reason why there’s so much interest in you. Do you have a favorite route to run?

KS: Teams have been asking me that question and I’ve been telling them that I love running a choice route. That was a big part of our offense this last year. We ran a choice route in some shape or form every single game. We had three options from a choice route standpoint. I can sit it down, break out or break in. It comes down to reading coverages. We had to make those decisions based on coverage looks.

Is it man coverage? Is it zone, and if so, what type of zone? Where can I sit this down while still getting to my five-yard landmark? If I do decide to break this outside, I have to make sure the cornerback isn’t sitting out there. Having to retain all of this information as you’re running the play, I find that to be a lot of fun. I find it fun that I have to figure out what I’m going to do within my choice route while reading coverage.

At the end of the day, if you give me three options on a route, I’m going to get open.

JM: That’s such a thorough answer and it’s easy to see why you’re a technician on tape. How do you approach a bigger, more physical cornerback in coverage differently than you do a smaller, shiftier one?

KS: To be honest with you, I find those smaller, shiftier guys typically make for a tougher assignment. Those are the guys that are typically better at watching your hips and watching your movements while attempting to match your steps. They want to match your release. If I hit them with a double-jab, he’s going to try and match my double-jab. Can I execute it faster than he can react to it? That’s what it comes down to with those guys. I don’t like to waste time with those smaller guys. You have to get right into your plan of attack against the smaller, shiftier cornerbacks.

As far as the bigger physical guys, I’ll take my time with them from a release standpoint because I know he’s trying to get his hands on me because that’s the strength of his game. I’ll go ahead and hit him with a better and smoother release so that I can work him a little bit because once I get past him off the line of scrimmage, it’s over for him.

JM: You clearly understand wide receiver play at an extremely high level. What do you feel is the best game you ever played in a Boise State jersey and why?

KS: That’s a tough question. My coaches put me in such great situations every single week by allowing me an opportunity to perform within our offense. If I had to pinpoint one, it would probably be the game against UTEP from this past season. It goes beyond my personal stats from that game. We had just experienced a tough road loss the week before against UCF and that was a great team win for us. We executed well from start to finish. There’s nothing better than winning a game with your brothers and celebrating in the locker room as you look around and see nothing but smiles on everybody’s faces.

JM: You were terrific in that game. You caught seven balls for 166 yards and the team picked up a big win. I’ve really appreciated your time today. You’re one of the most dynamic receivers available in the 2022 NFL Draft, and this conversation has highlighted that you’re one of the smartest, most caring players as well. What kind of impact is Khalil Shakir going to make at the next level?

KS: Whichever team decides to take a chance on me is going to get the most versatile receiver in this draft. I truly believe that. Not only can I play the slot position, but I can play X and Z as well. I spent time lining up in our backfield from my freshman year forward at Boise State. I’ve lined up in the wildcat.

I’m not just saying these things, I have the film from the past four years to prove it. You’re going to get the most versatile player in the draft.

I’m a down-to-earth guy that loves looking after his teammates in every aspect of life, both on and off the field. I’m a leader by example. I love making sure that my teammates are doing well. I’m always thinking of my teammates. At the end of the day, it takes all of us to go out there and win games.