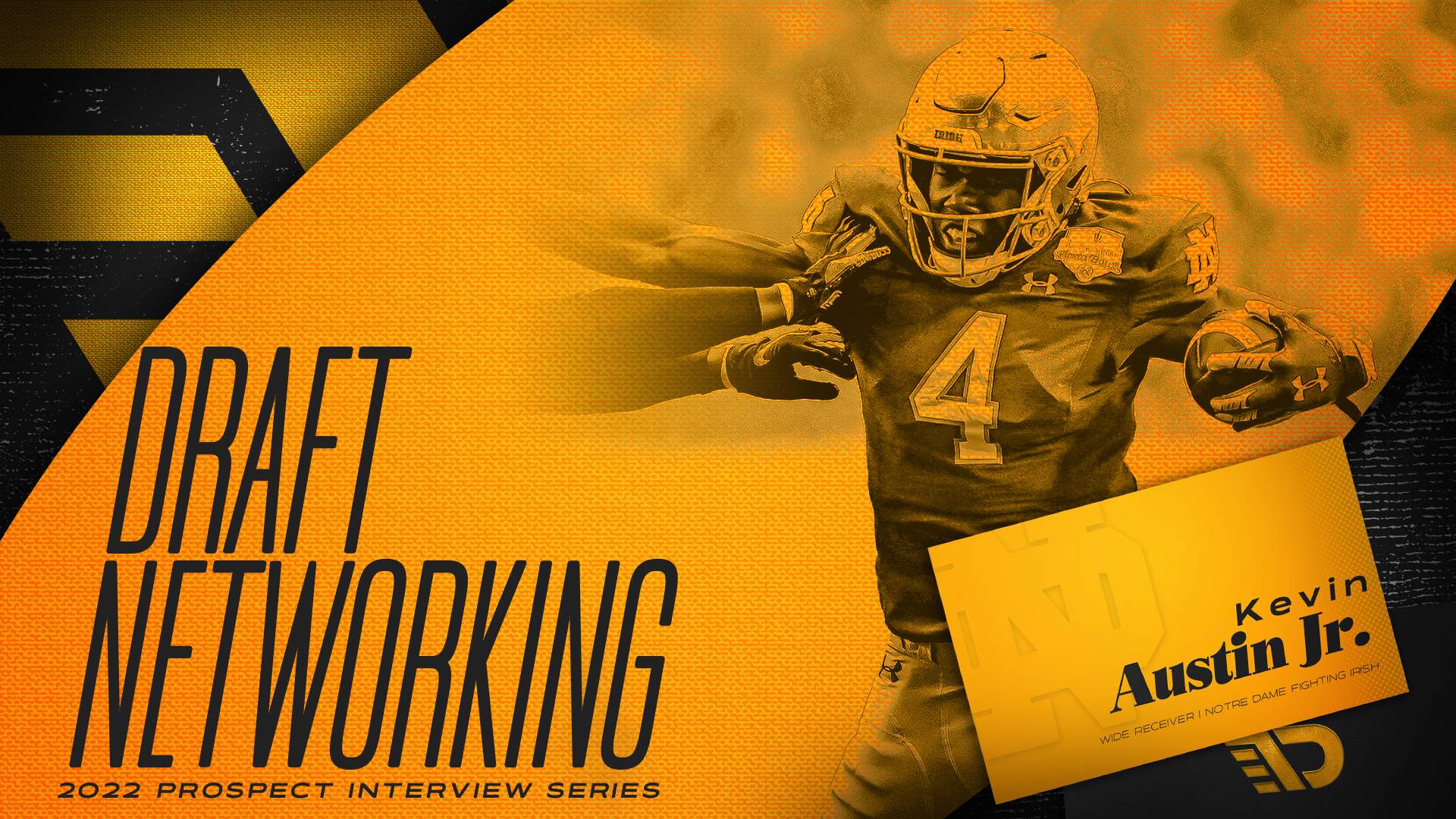 Notre Dame’s Kevin Austin Jr. stole the show at the NFL Scouting Combine. The Fighting Irish receiver electrified those in attendance by posting a 4.43 result in the 40-yard dash to go along with a 39-inch vertical, 132-inch broad jump, and receiver-topping 6.71 in the three-cone. Several receivers impressed in Indianapolis, but Austin Jr. was undeniably a part of the smaller group that could define themselves as the cream of the crop. Austin Jr.’s draft stock now has a jetpack attached to it.

Austin recently spoke exclusively with The Draft Network about his combine performance and experience, his main takeaways, which defensive backs he most enjoyed competing against, his favorite routes to run, and so much more.

JM: You absolutely lit the combine on fire. You ran the 40 in 4.43 seconds, which is a terrific time for your size (6-foot-2, 200 pounds). You posted a vertical jump of 39 inches and a broad jump of 132 inches. All of these results were elite. Your 6.71 in the three-cone was the fastest time among participating receivers. How would you grade your overall performance?

KAJR: I would say I did a pretty good job out there. I went to Indianapolis and took advantage of the opportunity to showcase my talent. I did exactly what I thought I was capable of achieving at the combine. I’m happy with my performance overall. I reached all of the goals I aspired to reach.

JM: You certainly did that. Do you feel like you improved your draft stock in Indianapolis?

KAJR: Yeah, I feel like I’ve established myself as one of the best receivers in the country and in this draft class. That’s how I want to be recognized throughout this process. I definitely feel like I opened some eyes and dropped some jaws. If teams had any questions about my athleticism or what have you, I appropriately addressed those questions with my performance. I definitely feel like teams are looking more into me now.

JM: What was your main takeaway from the combine?

KAJR: I really enjoyed learning from various different NFL coaches. You go through the process with so many professional coaches and they can always teach you a thing or two. I really tried to take in the overall experience. I lived in the moment. I was extremely thankful and blessed to receive an invite.

JM: Did you meet with many teams formally throughout the week, and do you have any more meetings coming up?

KAJR: We’re in the process of setting up my virtual meetings right now, and I have a bunch of interviews scheduled for my Pro Day. We’re excited for the rest of this process. We’re in the home stretch and I’m excited to speak with teams as we near the draft.

KAJR: I would point to the nine-route, the deep ball. I also love running shorter routes such as the slant and stop routes. Those quicker developing routes allow me to get the ball in my hands in a more efficient manner.

JM: What are some of the ways you create separation as a route runner?

KAJR: I always try to use my vertical speed. I also have a diverse release package off the line of scrimmage. I can do a lot of things to defeat a defensive back in coverage. These are the things I’m thinking of when running routes, but I definitely use my speed first and foremost.

JM: You possess terrific speed. How did playing in Notre Dame’s offense help get you ready for the next level?

KAJR: We ran a pro-style offense. I would say our offense was extremely similar to several NFL offenses. Our offensive coordinator Tommy Rees has played and coached in the NFL and he prefers to run a pro system. He’s done an excellent job teaching us and helping us learn pro offenses. It’s an experience that’s going to help me a bunch at the next level. I understand that some teams are going to run some of the same concepts I’m experienced running and executing. Being in that pro-style offense has helped me so much.

JM: That’s an excellent point. Playing at Notre Dame allowed you to compete against some terrific defenders. Who are some of the best cornerbacks you ever played against?

KAJR: I have to start by giving credit to my own teammates. I spent several seasons practicing against the likes of Julian Love, Troy Pride Jr., and of course, Kyle Hamilton. Iron sharpens iron and all of those guys pushed me in practice. In terms of cornerbacks from other teams that we played against this past season, Cincinnati had a pair of excellent corners in Sauce Gardner and Coby Bryant.

JM: Those are some great defenders. Do you approach a bigger, more physical cornerback in coverage differently than you do a smaller, shiftier one?

KAJR: I tend to attack a bigger cornerback with my speed. I have terrific size as well so sometimes those guys think I’m going to match size with size, and physicality with physicality, but I can use my vertical speed to blow past them. For those quicker and smaller defensive backs, I can switch it up and become more physical with them. I try to make them uncomfortable and throw them off their game. Those guys typically struggle with size.

JM: That’s the right way to approach that. If you could catch a pass from any quarterback in the NFL, who would you choose and why?

KAJR: That’s a tough question. That’s a really tough question (laughs). Obviously, everybody would love to catch a pass from Tom Brady, especially now that he just announced his triumphant return (laughs). He’s one of the greatest players of all time. There are so many great quarterbacks in the league. Aaron Rodgers, Josh Allen, and Patrick Mahomes come to mind as well.

JM: Those are some excellent choices. I’ve really appreciated your time today. What kind of impact is Kevin Austin Jr. going to make at the next level?

KAJR: I‘m going to make a huge impact due to my special playmaking ability. I’m ready for this moment and I’m going to embrace the challenge. I’ve been prepared by Notre Dame to take my game to the next level. I’m more than just a deep threat. I’m one of the best receivers in this draft class.