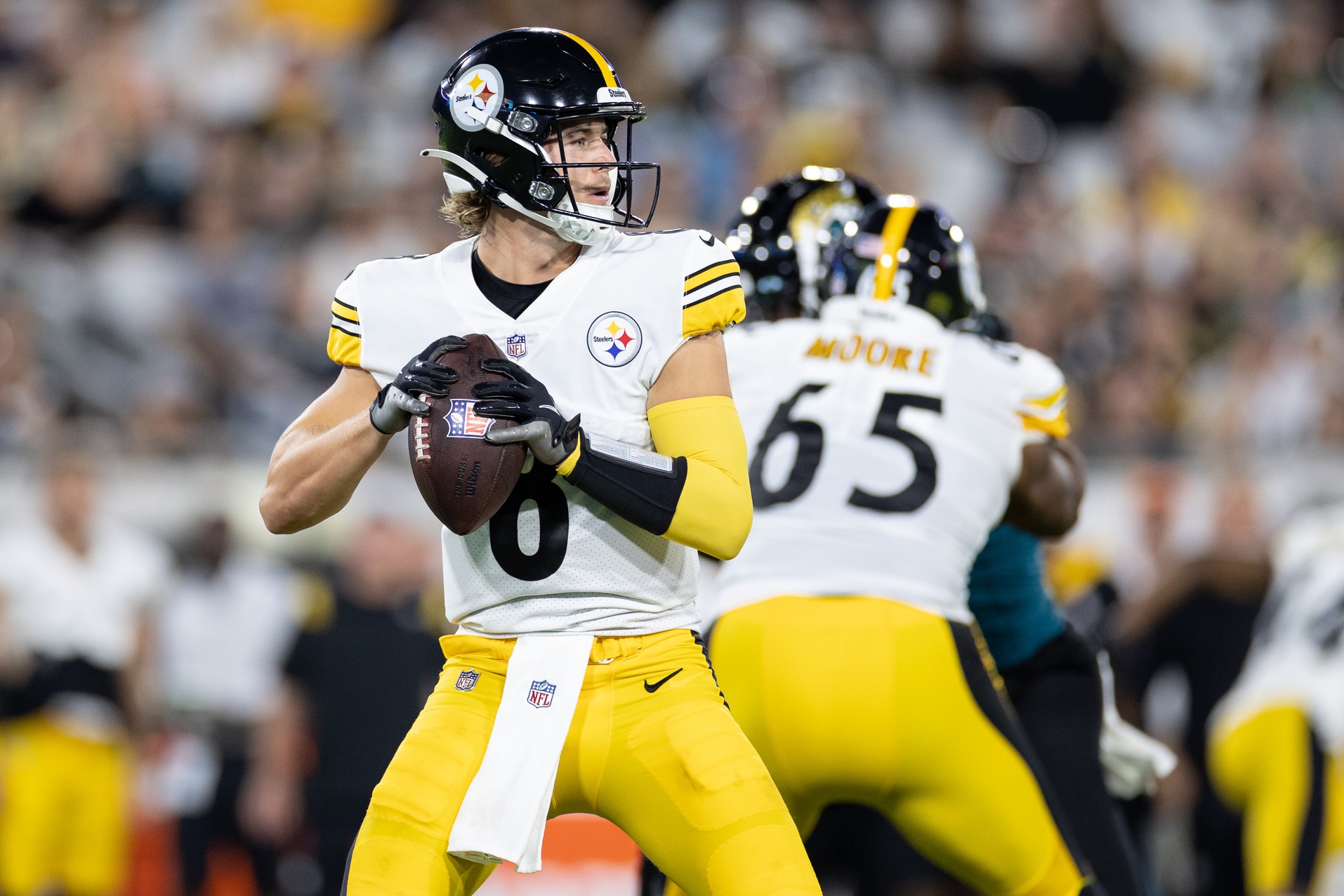 Pittsburgh Steelers rookie quarterback Kenny Pickett put forth a standout showing in their Week 2 preseason victory over the Jacksonville Jaguars. The No. 20 overall selection in the 2022 NFL Draft, Pickett completed an efficient 6-of-7 passing attempts for 76 yards and a touchdown. Pickett’s performance increases his chances of being Pittsburgh’s starting quarterback for their Week 1 regular season date with the Cincinnati Bengals.

Indications out of training camp are that Pickett has been inconsistent throughout practice, but we’ve seen a different, more effective version of the rookie gunslinger in the preseason. Through two exhibition contests, Pickett has completed 19-of-22 passes (86.3% completion percentage) for 171 passing yards, three touchdowns, and zero interceptions. Pickett has shown the desired ability to command offensive coordinator Matt Canada’s offense. Despite what has occurred in practice, Pickett has been Pittsburgh’s best quarterback through two live-action games.

It’s worth noting Mitch Trubisky received the start against Jacksonville, not Pickett. Trubisky handled himself appropriately, showcasing good escapability while under duress in the pocket. The former North Carolina standout completed 5-of-8 passing attempts for 60 yards. Snap distribution between Pittsburgh’s quarterbacks continues to indicate that Trubisky remains the in-house favorite to begin the season as their starter under center, but Pickett is beginning to breathe down Trubisky’s neck. The race is much tighter than it was a month ago.

Mason Rudolph entered the game as the third quarterback and earned the majority of the snaps. Rudolph enjoyed a fruitful performance too, completing 17-of-21 passes for 127 yards and a touchdown, including a game-winning touchdown to Tyler Snead.

Rudolph did make a sizable mistake in the game, getting called for an intentional grounding from his own end zone, which resulted in a safety and two points for the Jaguars. It’s the type of error Rudolph shouldn’t be making in his fifth season.

Rudolph played a quality game outside of that blunder, but the pecking order suggests he’s not realistically in the running to earn Pittsburgh’s starting job. Rudolph continues to play extensively, but it’s occurring behind the likes of Trubisky and Pickett, who have consistently received more opportunities with Pittsburgh’s first-team offense (a telling development). Rudolph’s name has circulated in trade rumors, and it’s possible Pittsburgh afforded him so many opportunities on Saturday (his 21 throwing attempts were more than double what Pickett and Trubisky attempted) as a showcase for other teams. Rudolph may still be traded before rosters are cut down to 53.

The only quarterback selected in the first round of April’s draft, Pickett’s pre-draft scouting report showcased a quarterback that became increasingly accurate and productive as his collegiate career progressed. Pickett has terrific poise as a quarterback that can thrive while extending plays, which may be a necessity behind Pittsburgh’s questionable offensive line. Pickett goes through his progressions and blends aggressiveness with making sound decisions with the football (he’s yet to commit a turnover). Pickett is a well-developed quarterback that had full command of the Panthers’ offense. It’s the same traits Pickett has displayed throughout two very successful preseason showings.

Pickett possesses the highest ceiling of any Steelers quarterback. The sample size on Rudolph is large enough to suggest he isn’t the answer. Trubisky remains an intriguing reclamation project with a chance to earn low-level starting QB money on a bridge two-year contract. The same processing and accuracy woes that doomed Trubisky in Chicago have popped up on occasion at Steelers training camp, however. Head coach Mike Tomlin must make a difficult decision shortly.

There’s a reason the front office felt comfortable enough to make Pickett the future face of their franchise. Perhaps the future is now. Pickett has shown enough to earn legitimate consideration to start immediately.