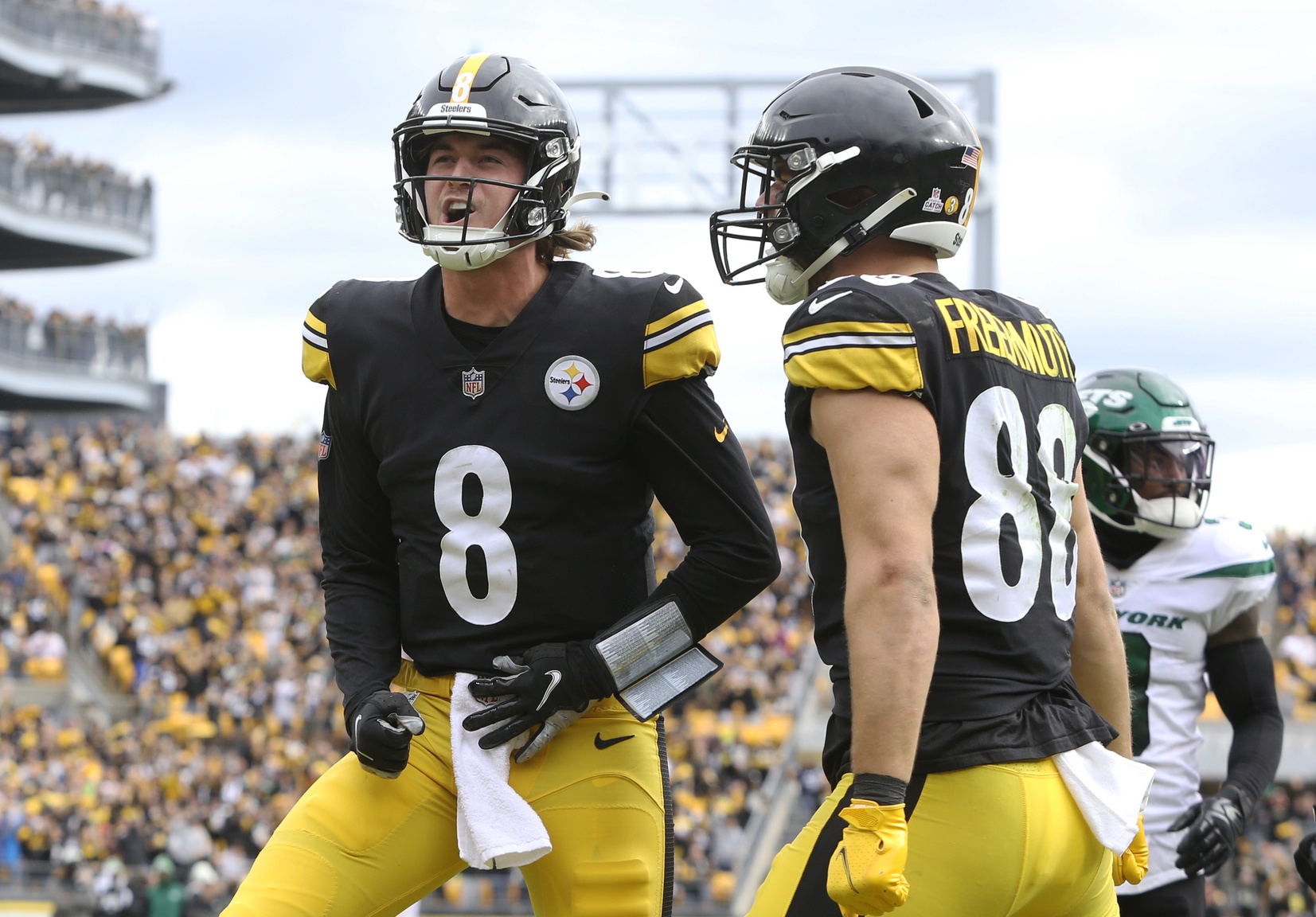 How Did Kenny Pickett Do In First NFL Action?

In the Week 4 of the 2022 NFL season, Pittsburgh Steelers head coach Mike Tomlin initiated the Kenny Pickett era… kind of.

With the Steelers trailing the Jets 10-6 to begin the second half, Tomlin handed the keys of the offense over to the rookie quarterback. Tomlin said after the game his offense “needed a spark” and hoped Pickett would be able to get things going after a lackluster first half from starter Mitchell Trubisky, though he didn’t commit to naming Pickett the starter going forward. To be fair to Tomlin’s indecision on a Week 5—and beyond—starter, Pickett’s performance in his first regular-season action in the NFL makes it a bit of a hard decision to make.

In a number of ways, Pickett absolutely gave the offense the spark that it so badly needed coming out of the half. After the rookie entered the game, Pittsburgh scored 14 straight points to take a 20-10 lead. Both touchdowns came on Pickett rushes, but he wasn’t just getting things done with his legs. He made some nice throws as well.

One of Pickett’s biggest throws came on his second touchdown drive. With the Steelers leading by only three, they entered New York Jets territory in the closing moments of the third quarter. New York eventually forced a 3rd-and-short at their own 35, just around the perceived limits of Pittsburgh kicker Chris Boswell’s field goal range. Pickett wasn’t going to force Boswell to attempt his third 50+-yarder of the day, stepping up with a perfectly placed pass to fellow rookie George Pickens’ back shoulder. Pickens, to his credit, made a terrific catch with both feet in bounds right in front of Jets cornerback D.J. Reed.

Pickens with an incredible catch 😱

That wouldn’t even be Pickett’s only big throw of the drive.

Just a few plays later, the Steelers faced 3rd-and-8 at the edge of the red zone following a penalty and a couple of short rushes. Pickett faced pressure almost immediately but didn’t panic or try to flee out of the pocket. Instead, he stayed poised and, as he was hit, delivered a strike over the middle to tight end Pat Freiermuth for an 18-yard completion, setting his team up inside the Jets’ 5-yard line.

One play later, he scored his second rushing touchdown.

On the Steelers’ next drive, this time with Pittsburgh’s lead trimmed to 3, they faced a 3rd-and-3 still in their own territory. In a throw very similar to his previous completion to Pickens, Pickett delivers another well-placed pass to the rookie receiver’s back shoulder. Pickens makes a good adjustment to the ball in the air and comes down with it for a 26-yard gain and the first down.

I think George Pickens & Kenny Pickett are gonna get along just fine pic.twitter.com/xq9uWOAeP3

Pickett’s accuracy and poise were always some of his strongest attributes coming out of college, not only as far as his completion rate—which was an excellent 67.2% in 2021—but his ball placement. That was once again the case today with some really well-placed balls in crucial moments, even as some plays broke down around him.

At the same time, it was far from a flawless performance, which is what makes the decision going forward harder. Pickett’s three interceptions—really two, since a Hail Mary interception doesn’t really count—weren’t great.

One happened on his first pass attempt thanks to some overconfidence in his arm talent, trying to make too much happen as he launched the ball 50 yards downfield to a double-covered Chase Claypool.

Feeling the pressure to make something happen after the offense was so stagnant for a half is understandable, but attempting that throw wasn’t a great decision on his part.

Pickett’s second interception proved to be even more costly, as it gave the Jets the ball for what turned out to be their game-winning touchdown drive.

As impressive as Pickett’s accuracy was for much of the game, this play was one of his occasional misfires on a pass that was too high for Freiermuth to come down with. The ball bounced off of the leaping tight end’s hands and into the arms of a diving Michael Carter II.

Pickett admitted after the game that he intended to throw the ball away, which ultimately would have been the right decision with so much pressure in his face and Freiermuth tightly covered. Going forward, he has to learn to keep the ball as far away from his pass-catchers as possible if he’s trying to throw it away. Keeping it within reach was a mistake that not only led to the interception but ultimately led to the Steelers’ 24-20 loss.

So there was a spark and some nice plays from Pickett in his NFL debut but some bad mistakes as well. Ultimately, it’s up to Tomlin whether to stick with Trubisky or keep the Pickett era going, but it’s undeniable that the offense, for the most part, looked much better with Pickett on the field.

After a 1-3 start good for the sole possession of last place in the AFC North, there’s not much to lose anymore. Getting Pickett more reps should lead to fewer mistakes and is the right move for the Steelers at the end of the day.