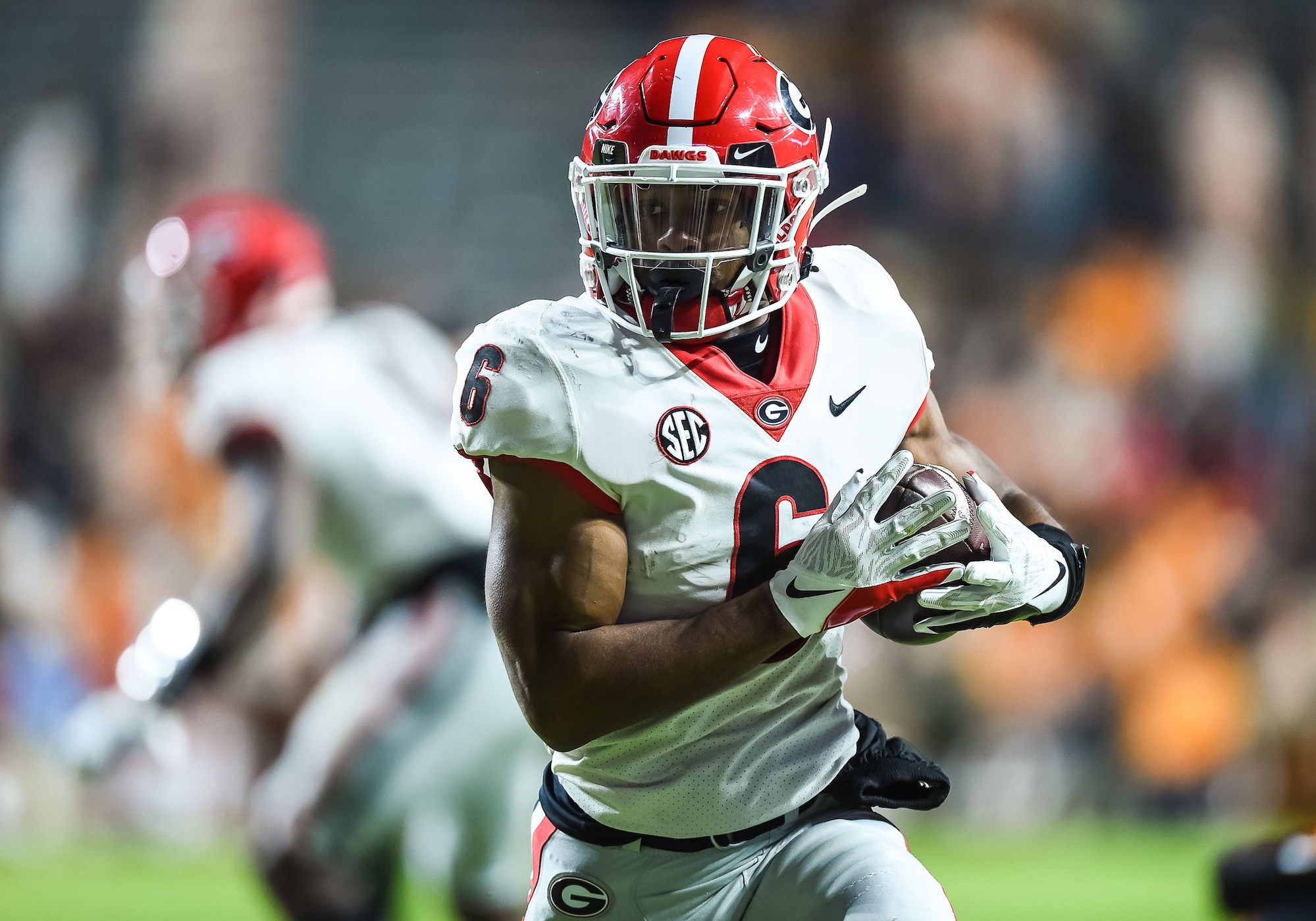 How Kenny McIntosh Can Help An NFL Team

We have all heard how much the NFL devalues the running back position. Why draft one in the first when you can find one in the fourth? There is some truth to that with examples every year. Heading into the 2023 NFL Draft, this running back group can add to the example and challenge opposing ideologies.

This group of running backs is immensely talented with good depth as well. The names are resounding: Bijan Robinson, Jahmyr Gibbs, Tank Bigsby, Blake Corum, Zach Evans, etc. One name to watch out for is Georgia’s senior tailback Kenny McIntosh. Georgia is not the type of offense that feeds one running back for an entire season. Typically, they use a back-by-committee approach to keep guys fresh and throw multiple runners at opposing defenses. McIntosh earned the role of the “lead back” in the Bulldogs’ loaded backfield.

Not having an overly heavy workload can be viewed as negative and/or positive. McIntosh will have lightly used tread on his tires with a better chance of longevity. After studying his tape and skill set, here is what I believe he will bring to an NFL offense.

McIntosh’s best or A-trait is his skill set as a pass-catcher out of the backfield. He can run multiple routes from different alignments across the offensive formation. He motions out of the backfield to the slot and out wide. He has receiver-esque movement skills and abilities. The tweet below is a great example of this. McIntosh tracks the football in flight down the field with great confidence.

started slow today, but the mail doesn’t always get delivered when you expect it to during the holiday season pic.twitter.com/UGQSxDsUpf

An offensive coordinator should love his skill set and use him as a mismatch weapon in the passing game. There is more to see as a receiver for McIntosh with an even more expanded route tree. To put it in context, his receiving abilities are in the grouping with Gibbs and Robinson.

Next, McIntosh boasts frame NFL ball clubs should value. At 6-foot-1 and 210 pounds, he is an inside-and-out runner. Teams that want a versatile running back should have McIntosh’s name on their board. He is experienced in both zone and gap schemes. His patience and footwork are impressive for a running back with limited reps and experience.

A well-rounded runner along with a talented receiving option can uplift most NFL offenses. McIntosh has the overall skill set and frame combination to be an RB1 on Sundays.

Lastly, his upside is legitimate. McIntosh waited until his senior year for the opportunity to lead his backfield. The leadership and patience that he displayed by waiting it out instead of transferring are admirable. McIntosh was voted as a captain this season. As most former four/five-star recruits would have entered the transfer portal instead.

I believe the game will become even slower for McIntosh with more touches and usage in the NFL. A player with his height, weight, and speed should not be as comfortable cutting without losing speed, but McIntosh does it with ease.

Kenny McIntosh crossin n saucin like he on the hardwood !! @1_blueprint #6Era pic.twitter.com/d4TzIDcKbG

If your team needs a starting-caliber running back that will impact both the run and passing attacks, but you prefer to wait past day one, Kenny McIntosh is the guy you will want. The uber-talented Bulldog tailback is just scratching the surface.