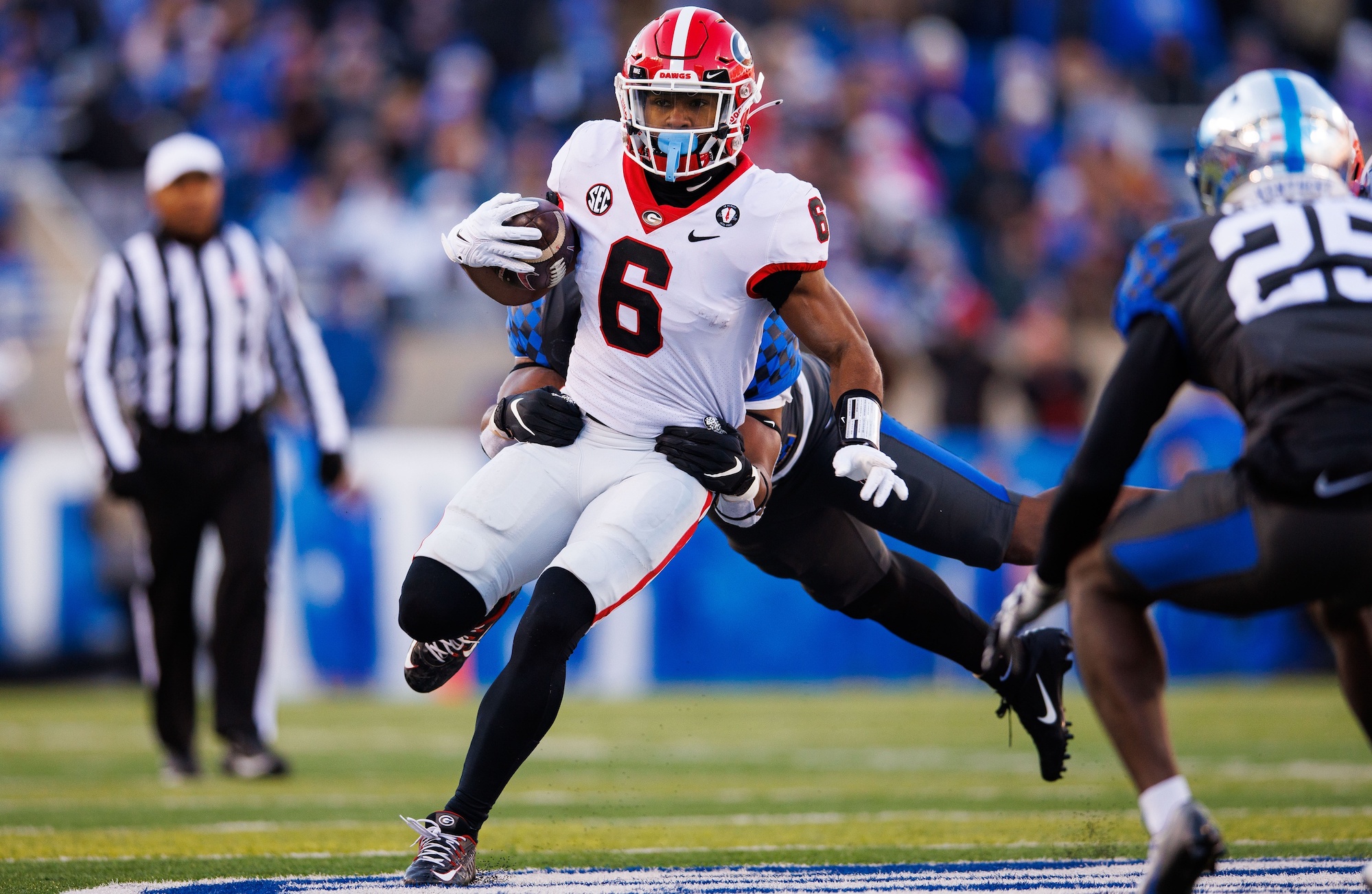 Kenny McIntosh Should Be On Your NFL Draft Radar

Georgia Bulldogs running back Kenny McIntosh enjoyed a breakout performance in Saturday’s 16-6 victory over the Kentucky Wildcats. McIntosh rushed for 143 yards and a touchdown on 19 carries. McIntosh routinely gained chunks of yardage while averaging a season-high 7.5 yards per attempt. McIntosh carries the potential of a versatile NFL back that can be a three-down contributor.

McIntosh’s nine-yard touchdown occurred in the third quarter. It was the first touchdown of the game, extending Georgia’s lead to 16-0. McIntosh took advantage of some excellent run blocking to essentially confirm Georgia’s victory.

Kenny McIntosh and @GeorgiaFootball get the job done on the ground. pic.twitter.com/Q9gLHwth1l

McIntosh is involved in a timeshare alongside fellow Georgia ball carrier Daijun Edwards. McIntosh has earned just four more rushing attempts than Edwards this season (111 to 107) while out-gaining him 568 to 547. Both backs are averaging 5.1 yards per carry and have scored seven rushing touchdowns apiece. McIntosh projects best to the NFL level in a similar timeshare.

A dual-threat back, McIntosh has totaled 33 receptions for 341 receiving yards and a touchdown this season. He’s outproduced Edwards by a sizable margin as a receiver. He leads all Georgia running backs in receptions, yards and receiving touchdowns, and ranks third on the team among all eligible pass-catchers in receptions and fourth in yards. McIntosh has 66 career receptions. His experience as a pass-catcher will intrigue NFL franchises that place a premium on backs that can create mismatches in the passing game.

Return abilities via special teams makes McIntosh a versatile and more appealing prospect. Across four seasons, McIntosh has returned a total of 14 kickoffs for 375 total yards. He’s too important to Georgia’s overall offensive success to be deployed in that role this season, but his previous success as a returner indicates he may capture such a role at the next level. McIntosh possesses an explosive career average of 26.8 yards per kick return. It will positively factor into McIntosh’s pre-draft evaluation profile.

McIntosh possesses terrific size (6-foot-1, 210 pounds) for the next level. McIntosh is a patient, disciplined runner that rarely leaves yards on the field. He identifies daylight behind Georgia’s excellent offensive line and exploits creases for maximum gains. McIntosh possesses the burst necessary to test opposing defenses at the second level.

It’s worth acknowledging McIntosh is an older prospect as a fourth-year senior. Enrolling at Georgia often means patiently biding your time. McIntosh played behind Zamir White and James Cook in both 2020 and 2021. McIntosh’s ceiling will come into question throughout the pre-draft process.

Seven total running backs made November’s TDN100 update. McIntosh doesn’t make an appearance, trailing the likes of Michigan’s Blake Corum, and Auburn’s Tank Bigsby. Continued performances like the one we witnessed against the Wildcats may eventually qualify McIntosh for top-100 consideration, however.

The No. 1-ranked Bulldogs appear headed for the College Football Playoff. Kenny McIntosh’s dual-threat efforts are crucial to their offensive approach. Georgia possesses legitimate aspirations to claim back-to-back national titles. McIntosh may continue improving his draft stock as a result.