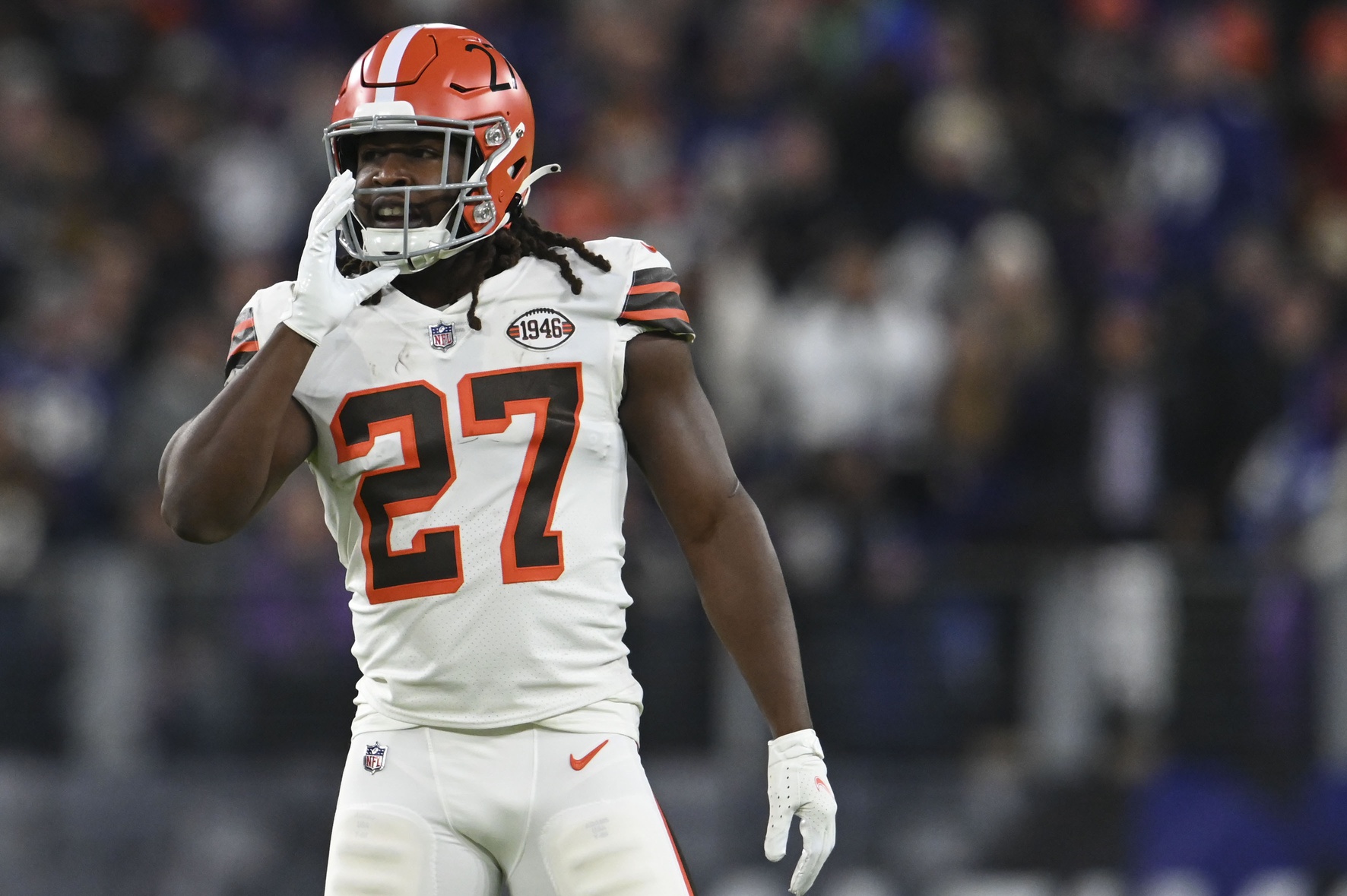 3 Teams That Should Try To Trade For Kareem Hunt

Cleveland Browns running back Kareem Hunt is entering a crucial contract year in 2022. The Lorain, Ohio native is set to earn $6.25 million this season with a base salary of just $1.35 million in the final year of a two-year extension previously signed in 2020. Recent reports indicated the Browns and Hunt haven’t held any substantive talks regarding a potential extension.

Hunt has formed a fearsome duo alongside Nick Chubb in Cleveland’s backfield but the writing may be on the wall for Hunt’s future in Cleveland. Chubb’s cap hit of $5.21 million in 2022 leaps significantly to $14.85 million in 2023, via Over The Cap. Chubb’s cap hit increases to $16.2 million for the 2024 season. It’s difficult to envision the Browns committing another sizable chunk of change to retain Hunt.

For what it’s worth, Hunt prefers to remain in Cleveland.

“I was born and raised in Ohio,” Kareem Hunt told Mary Kay Cabot recently. “I’d love to finish my career here and just keep playing the game with (Nick) Chubb longer and with the great guys on this great team.”

Eagles General Manager Howie Roseman has been one of the most aggressive decision-makers across the entire NFL this offseason. Roseman has acquired several difference-makers this offseason while proving he’s willing to part with draft capital in hopes of immediately competing for a Super Bowl.

Eagles Head Coach Nick Sirianni has crafted an offense that centers around running the football. The Eagles utilize an RPO-based rushing attack that features athletic quarterback Jalen Hurts. Sirianni’s efficient offense averaged a league-leading 159.7 rushing yards per contest last season. It makes the Eagles a premier landing spot for Hunt. Though Hunt would be walking into a similar timeshare alongside Miles Sanders, there are plenty of touches and opportunities to go around in Philadelphia’s run-based offense.

The Eagles didn’t draft a running back, nor have they re-signed Jordan Howard, who produced more than 400 yards of offense last season. Hunt is both an expert ball-carrier and pass catcher. Sirianni and offensive coordinator Shaine Steichen would immediately carve out a starring role for Hunt in their offense.

The Saints continue to search for an opportunity to add an additional running back to their roster. They recently hosted veteran running back David Johnson on a free-agent visit, but Johnson announced via his social media that the two sides were unable to reach an agreement. Saints General Manager Mickey Loomis previously hosted Sony Michel on a similar visit. The Saints clearly want to add another ball-carrier, and they have various reasons to do so.

Superstar running back Alvin Kamara was arrested and booked for battery resulting in substantial bodily harm after an alleged incident took place at a nightclub on February 6 in Las Vegas, Nev. The NFL continues to conduct its review of the situation. If the league’s decision-makers determine that Kamara violated their personal conduct policy, a substantial suspension could potentially arrive. Hunt could be viewed as a like-for-like replacement. Hunt is a similar playmaker as a dual-threat option coming out of the backfield.

Furthermore, Hunt and Kamara could co-exist within the same backfield. Kamara appeared in a career-low 13 regular-season contests last campaign after suffering a mid-season knee injury. Removing some of the weight off his shoulders by allowing Hunt to share some of the workload could be beneficial for all parties involved.

The Saints have been extremely aggressive this offseason. They’ve signed several veterans, including Jarvis Landry and Tyrann Mathieu. Loomis’ behavior doesn’t indicate a willingness to allow Kamara’s potential suspension to derail the Saints’ season. Acquiring Hunt would be wise.

Winning Super Bowl LVI hasn’t quenched the Rams’ thirst for success. General manager Les Snead recently completed staggering extensions for Cooper Kupp and Aaron Donald. The separate moves should allow the Rams to continue contending for additional Super Bowl rings. Snead’s continued maneuvering of the salary cap could make him a player should Hunt truly be made available via trade.

The Rams value running backs. When Cam Akers suffered a torn Achilles tendon injury in July, Snead immediately acquired Michel via trade. The Rams didn’t re-sign Michel earlier this offseason, who now plays for the Miami Dolphins. Akers ultimately returned for the Rams’ postseason run, and head coach Sean McVay proved capable of appropriately managing the utilization of several running backs. The Rams’ backfield is slightly crowded with Akers and Darrell Henderson Jr., but both ball carriers had issues staying healthy in 2021. Acquiring Hunt would provide the reigning champions with some much-needed insurance.