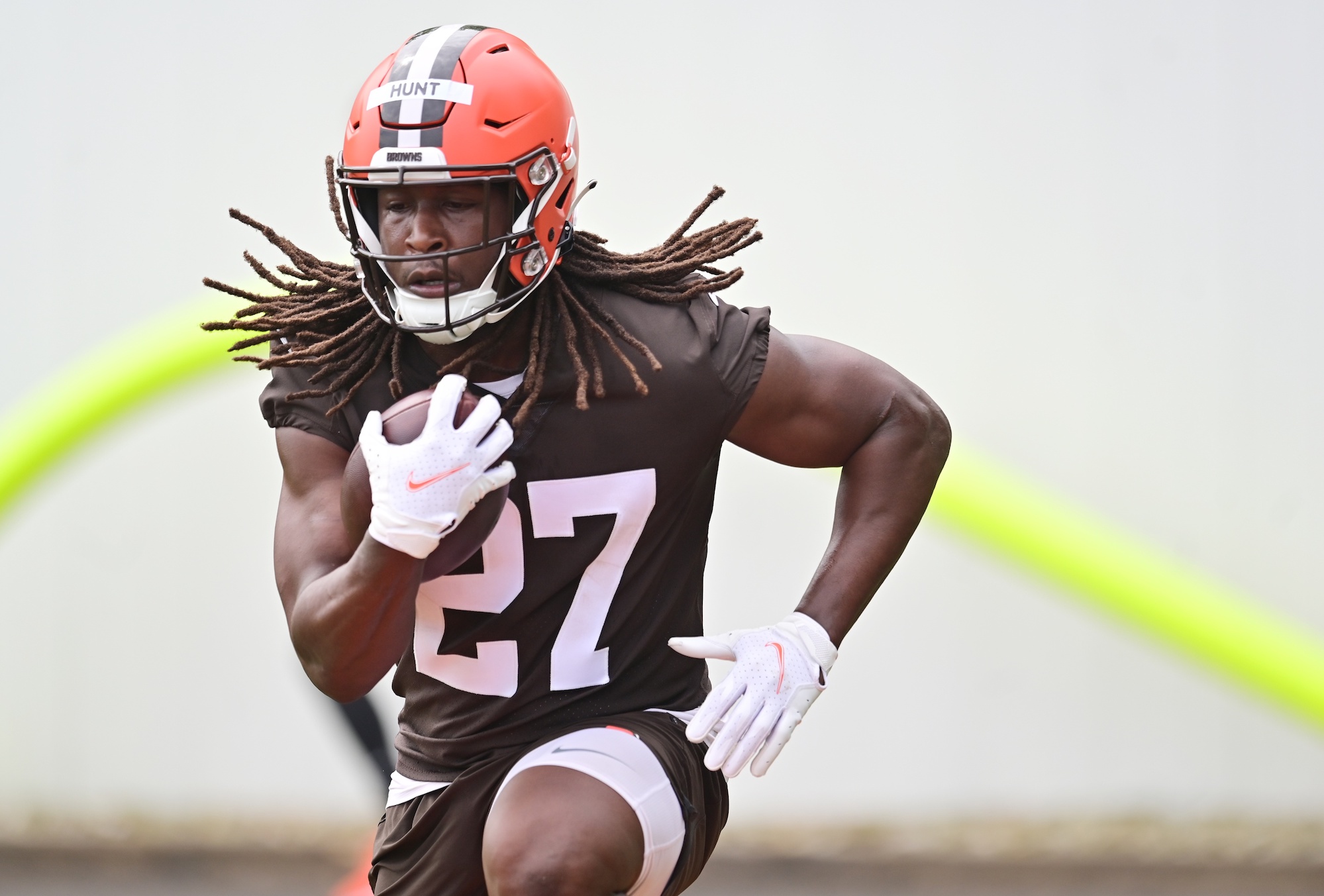 Can Browns Even Afford To Keep Kareem Hunt?

According to reports, the Cleveland Browns and running back Kareem Hunt have not held “substantive” talks regarding a potential contract extension. Hunt is entering a crucial contract year in 2022 and is set to earn $6.25 million this season with a base salary of just $1.35 million. Hunt has formed an excellent one-two punch alongside Nick Chubb in Cleveland’s backfield since first arriving in 2019, but Browns General Manager Andrew Berry is unlikely to afford Hunt beyond the 2022 campaign and should go cheaper at running back.

The Browns are currently set to be $19 million OVER the salary cap next offseason, via Spotrac. Impending releases and restructures will create additional breathing room, but Cleveland is rather committed from a salary cap perspective. The majority of Cleveland’s commitments are tied into three particularly expensive superstars, two of which were acquired via blockbuster trades this offseason. The trio of Deshaun Watson, Amari Cooper, and Myles Garrett are set to account for a whopping 46.57% of Cleveland’s cap in 2023 (Watson and his fully guaranteed $230 million contract leads the way with 23.72%).

Watson’s contract was strategically negotiated in such a manner and his cap hit is set to balloon from $10.028 million in 2022 to $54.993 million in 2023. Garrett, who signed a five-year, $125 million extension in 2020, will see his cap hit jump from $12.961 million to $29.176 million. Cooper is also set to experience an exponential rise from $4.896 million to $23.776 million. Sacrifices are necessary and Hunt appears set to spearhead a group of unaffordable assets headed for a change of scenery.

Berry and the Browns have signaled their aggressive intentions this offseason and expect the likes of Watson, Garrett, Cooper, Chubb, Joel Bitonio, Denzel Ward, and David Njoku (who just received a brand new four-year contract worth $56.75 million) to lead the Browns to annual postseason contention. Hunt has routinely played a major role for the Browns offensively, but will likely have to search for a new destination in 2023 given Cleveland’s financial situation. Berry is likely to search for a low-cost like-for-like replacement for Hunt.

Luckily for the Browns, the running back position is typically viewed as the most replaceable position on an NFL offense. With Chubb often serving as a two-down monster between the tackles, the Browns could simply search for a third-down specialist to pair alongside him or groom Jerome Ford for that role. Hunt has often been his most productive in Cleveland as a pass-catching threat on third-and-obvious passing downs, and pairing Chubb with a similar talent is likely to be the goal moving forward.

The 2023 NFL Draft should offer the Browns plenty of opportunities to find a draft-and-develop player, and it doesn’t necessarily require a premium selection. The Buffalo Bills may have drafted the best pass-catching back in 2022 via Georgia’s James Cook with a late second-round selection. The Tampa Bay Buccaneers landed Rachaad White in the third round. Hunt is an explosive and exciting talent, but his skill set is generally replaceable via a mid-round selection as the Browns are likely forced to get younger and cheaper at his spot.

Since arriving in Cleveland, Kevin Stefanski has typically run an offense that features Chubb and Hunt on a consistent basis. Cleveland’s offense is expected to become more pass-happy following Watson’s arrival as they attempt to become more modern and place more trust in their starting quarterback, but Stefanski will want to ensure the continuation of a diverse and efficient backfield. The allocation of resources simply has to change.

This offseason will likely go down in history as the busiest and most aggressive in Browns history. Berry has placed his unwavering belief in several high-level talents who represent both the immediate and future in Cleveland. Capturing a Super Bowl title is the ultimate goal and Berry believes his top-heavy roster can deliver the desired results in the near future. Berry has essentially already shaped that future and the financial details clearly didn’t leave room for Kareem Hunt.