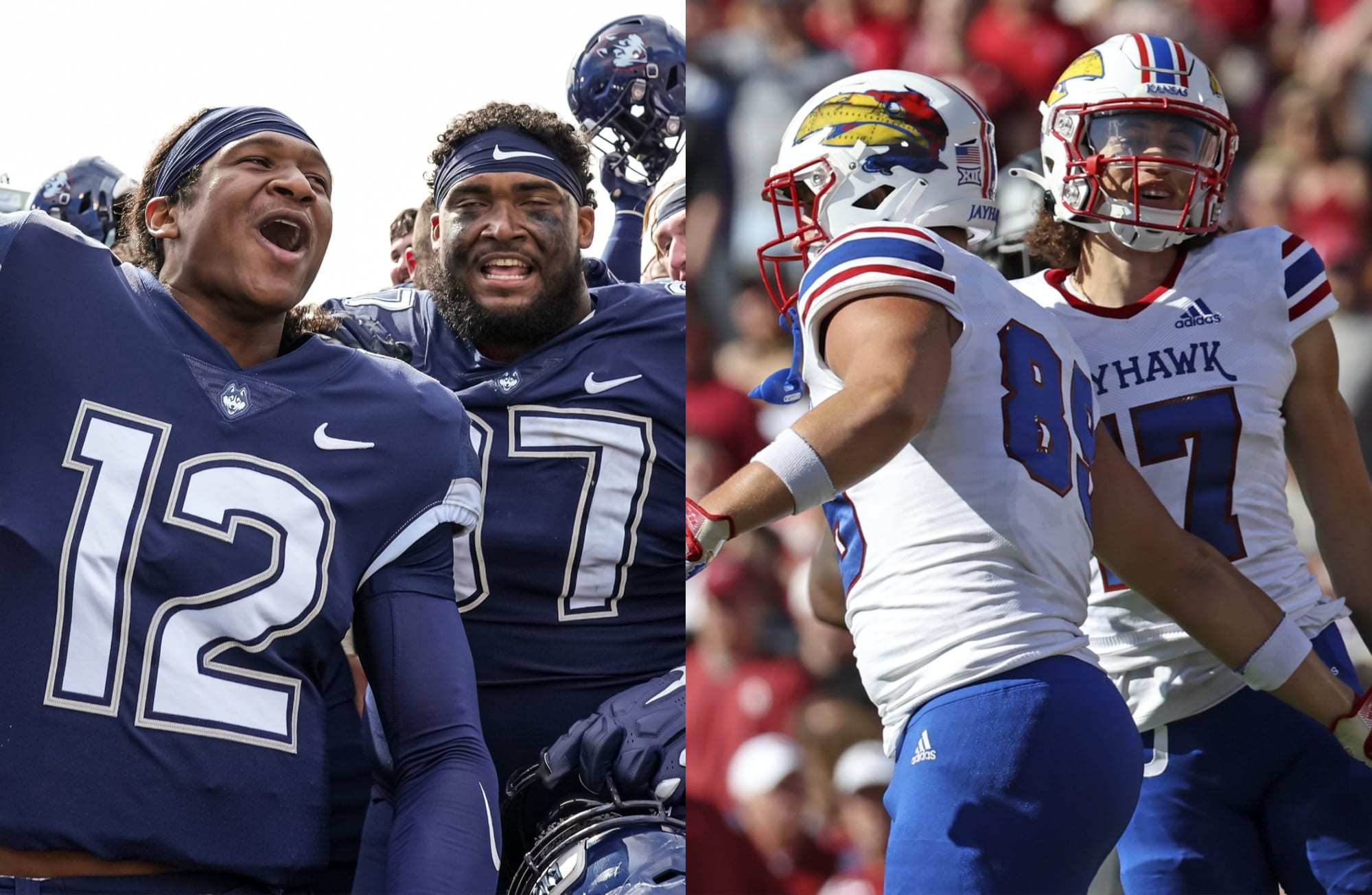 Improvement Of Kansas, UConn Football Should Be Celebrated

For two programs that have consistently represented the doormat of college football for years on end, the 2022 season has seen both the Kansas Jayhawks and UConn Huskies work back to relevancy as we approach the close of the college football campaign. Units led by two head coaches on the opposite end of the ideological football philosophy seesaw, diving into each team’s success this fall has been a massive net positive for two universities that usually wait for basketball season to hurrah about something.

Let’s start in Lawrence, Kansas, where a 2-19 mark the last two seasons combined hasn’t represented a light at the end of the tunnel for a long, long while. After a winless season in 2020 under Les Miles and not a single campaign with more than three wins since 2009, it’s been bleak, to say the least, for Kansas each and every fall.

However, with Lance Leipold in the building and a shiny new toy under center in Jalon Daniels, the Jayhawks began the year firing on all cylinders after taking down the likes of West Virginia and Houston both on the road.

For Daniels, a third-year impact athlete for the Jayhawks, injuries have hampered him from reaching his performance ceiling this fall. One of the nation’s most enjoyable dual-threat talents to study each and every week before he went down due to a shoulder injury against TCU, by no means was he expected to win the Heisman or evolve into a day-one NFL draft talent, but he represented the hefty straw that stirred a Kansas offense that ranked fourth in the nation with 48.8 points per game. A pass-first signal-caller that uses his legs when defenses are forced to drop bodies into coverage, Daniels is a nightmare to defend in space. Molded in the frame of a running back at 6-foot and 215 pounds, his ability not just to create with his lower half but dominate in space offered a wrinkle to Leipold’s offense that teams had no way of countering.

He wasn’t alone, however, as running backs Devin Neal and Daniel Hishaw Jr. provided a nice 1-2 punch to complement him on the ground. Out wide, even though it’s been Jason Bean slinging the rock, it’s remained a two-man show led by junior Luke Grimm and redshirt sophomore Lawrence Arnold, who make up a majority of the Jayhawks’ success through the air. Up front, an uber-experienced group leads the way highlighted by center Mike Novitsky.

Although a hot start has seen them come back to earth, a 5-3 record is lightyears beyond where they were just a few years ago.

For the Huskies, four wins in the last three years combined (excluding 2020) saw the firing of former head bench boss Randy Edsall in favor of Jim Mora Jr., who spent a large amount of his coaching career on Sundays. While talent has been few and far between, UConn has taken down both Fresno State and Boston College this fall, raising a banner of optimism toward its future.

What’s made it even more impressive is that they’re winning ballgames without the presence of their top weapon in sophomore ball-carrier Nate Carter, who ran for more than 120 yards against both Utah State and Connecticut State before totaling 71 on the ground against the Top-25-ranked Syracuse Orange.

While draftable talent won’t jump off the screen as you scour the roster—and a 120th-ranked recruiting class in 2023 won’t draw any headlines—there’s a reason the game is 11-11, and the ability of Mora Jr. to get guys to buy into what he’s selling has seen UConn blow expectations out of the water this fall.

The improvement and progression of both Kansas and UConn have been excellent to follow throughout the season. While years past saw weekly blowouts and minimal attendance from both the student body and surrounding community, the arrivals of Leipold and Mora JR. have provided a breath of fresh air into the lungs of each football program.