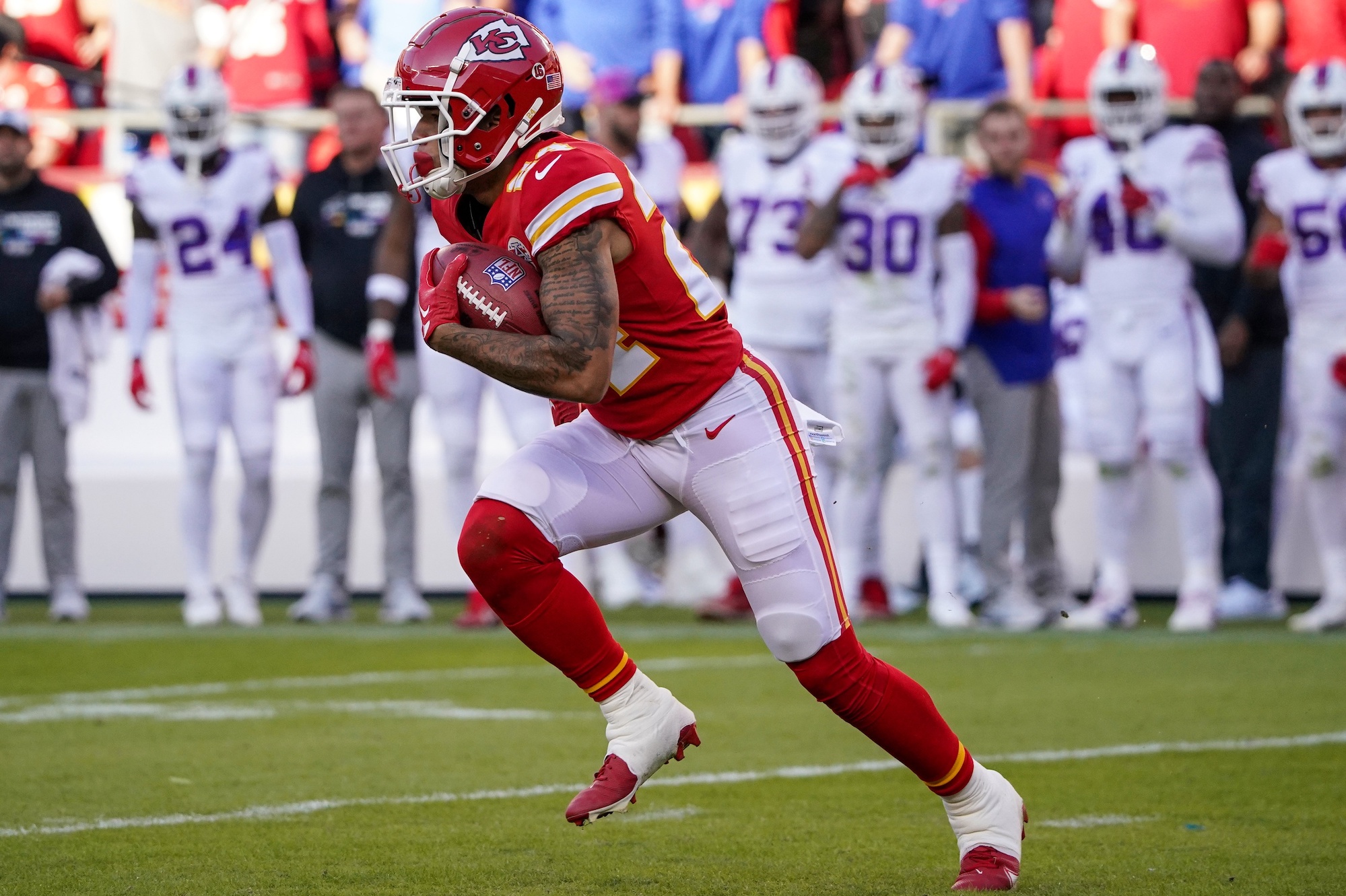 Chiefs Must Get Skyy Moore More Involved. How Can They?

The Kansas City Chiefs need to find a way to get rookie receiver Skyy Moore more involved in their offense.

Getting wide receivers more involved has been a problem with the Chiefs’ offense all season thus far. That may come as a surprise considering Kansas City has literally Patrick Mahomes playing quarterback and the fourth-most passing yards per game in the NFL through six weeks. But it’s not because of their receivers. Instead, much of the passing offense has run through tight end Travis Kelce and even running backs Clyde Edwards-Helaire and Jerick McKinnon.

So far this season, Kelce and the two running backs make up nearly 40% of Mahomes’ passing yard production with 672 combined receiving yards. The Chiefs’ leading receiver trio of JuJu Smith-Schuster, Marquez Valdes-Scantling, and Mecole Hardman have combined for less than 50% of Mahomes’ production with 814 total receiving yards. For comparison, as recently as last year, even without including Tyreek Hill, Chiefs receivers still accounted for a significant part of that production with 32% in comparison to Kelce and the running backs’ 37%

A big reason the team hasn’t been able to get their receivers going is their seeming lack of a true No. 1 wide receiver. Before Sunday, no wide receiver had recorded more than 90 yards in a single game, which Valdes-Scantling had done the week before, and of the starting trio, only Hardman had scored a receiving touchdown. On Sunday against the Bills, Smith-Schuster finally broke out, becoming the first Chiefs’ wide receiver to surpass 100 yards in a single game as he and Valdes-Scantling each scored a touchdown too.

The Chiefs are still winning, but it’s a far cry from how they were winning even a year ago. At this time last year, Hill alone had two games not only surpassing 100 yards but approaching 200. He also had five receiving touchdowns. Obviously, receivers like Hill don’t grow on trees, but it would benefit Kansas City to find a true leading receiver that isn’t Kelce.

That’s where Moore comes in. Though still a very raw prospect as a receiver who’s only played the position for three and a half years, Moore was incredibly productive in his final season at Western Michigan. In 2021, Moore put up 1,292 receiving yards and 10 touchdowns on 95 receptions, which put him in the top 10 in all of college football for receptions, in the top 15 for receiving yards, and top 25 for receiving touchdowns. Even with such a high volume of targets, Moore made the most of them as a big-play threat with his impressive route-running and run-after-catch abilities.

So far this season though, Moore hasn’t seen much action outside of kick and punt returns. He’s been targeted just 11 times in six games, though he does have six catches for 100 yards and his offensive snap count has been steadily climbing as he continues to make big contributions. He made a couple of big catches in the waning moments of the Chiefs’ win over the Raiders a couple of weeks ago. He also had a really nice route and run-after-catch moment against the Bills last Sunday (thanks in part to an incredible Mahomes throw).

Skyy Moore explodes off the LOS before getting into his route. He fights through contact at the top of the stem to break outside.

Mahomes is fading left because of the push from Von Miller but throws a dime back to the right. pic.twitter.com/Thhp24umSP

The potential is clearly there, and Moore should get extra opportunities to show it going forward.

The Chiefs really need to use Moore out of the slot as a guy who can win on fades, contested catches over the middle of the field, and as a runner after the catch on short swing passes. Getting the rookie more involved in the offense is surely something that will come with more time as the season continues, but Kansas City needs to see more from their receivers. Giving Moore extra snaps as the slot receiver and letting him show off what he can do is a good way to get things going.