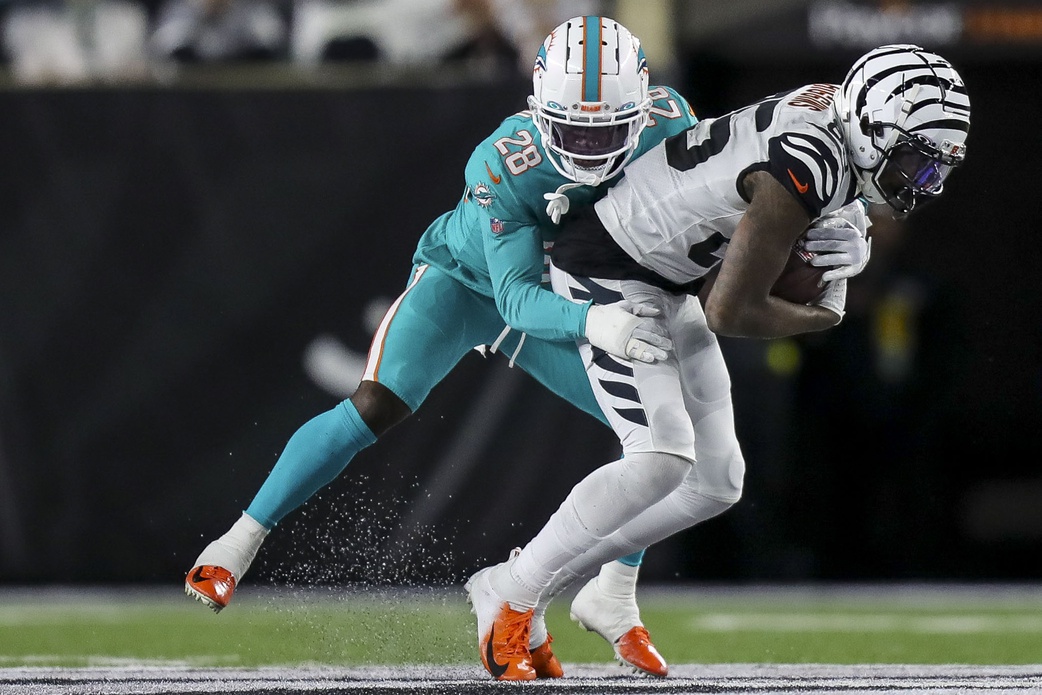 Kader Kohou Making An Impact Right Away As UDFA

The Miami Dolphins dropped their first game of the season Thursday, suffering a 27-15 defeat at the hands of the Cincinnati Bengals. Dolphins quarterback Tua Tagovailoa suffered a scary-looking head/neck injury and was stretchered off the field. Somewhat lost in these storylines was the continued emergence of Dolphins undrafted rookie cornerback Kader Kohou.

Kohou continues to step up while the Dolphins deal with various injuries and inconsistencies at cornerback. Kohou has carried over the standout play he established throughout training camp and the preseason into the regular season. Kohou appears to be a UDFA gem.

Through four contests, Kohou is leading all Dolphins cornerbacks in total tackles (17). Kohou has also recorded one pass breakup and one forced fumble. He’s also shown a willingness to come downhill as the lone Dolphins cornerback to record a tackle for loss. Kohou is playing with excellent instincts beyond his years. Kohou is impacting every facet of the game for Miami’s defense—it’s extremely impressive.

Dolphins No. 1 cornerback Xavien Howard departed Thursday’s contest with a groin injury. Howard has been visibly injured throughout the early portion of the campaign. Byron Jones remains on the PUP list. Fellow cornerback Noah Igbinoghene was inactive and is swiftly trending toward first-round bust territory. These occurrences have led to more playing time for Kohou than originally expected. Kohou has seized the opportunity.

The UDFA hit the ground running in Week 1 and hasn’t let up. Kohou earned an overall grade of 91.9 from Pro Football Focus while playing 18 defensive snaps in Miami’s opening-contest triumph over the New England Patriots. Since then, Kohou’s snaps have essentially increased with each passing showing. He played 25 defensive snaps in Week 2 and 70 snaps (76% of Miami’s defensive plays!) against the Buffalo Bills in Week 3. Kohou played 49 defensive snaps against the Bengals, but it’s worth acknowledging that represented 77% of the Dolphins’ defensive plays—which continues the theme of Kohou seeing a season-high workload as the weeks progress. Kohou’s influence is growing.

Kohou isn’t only paying immediate dividends. His path to future snaps in the slot is somewhat clear. Dolphins nickel cornerback Nik Needham is in a contract season. Needham is earning $3.986 million and is due for a sizable raise next offseason. It will likely arrive elsewhere, as the Dolphins are unlikely to commit $6-plus million annually to Needham given their other financial commitments. Kohou’s frame (5-foot-10 and 195 pounds) and skill set make him a natural fit at nickel. Kohou is being groomed as Needham’s long-term replacement in the slot. Kohou should remain a crucial piece of Miami’s defense in 2023 and beyond.

Kohou is living proof that the NFL will continue identifying talent regardless of the path taken. Kohou was a largely unknown commodity that applied his trade at the Division II ranks (Texas A&M–Commerce). Kohou appeared in 44 games for the Lions across four campaigns. The Abidjan, Côte d’Ivoire native (Kohou moved to Euless, Texas at a young age) recorded 111 total tackles, 37 passes defended, and five interceptions in college. The Dolphins pounced on his availability at the conclusion of the 2022 NFL Draft. What a wise decision that was.

The Dolphins appear to be legitimate postseason contenders. Don’t let Kohou get lost in Miami’s star power. Kohou appears primed to thrive as a full-time contributor.