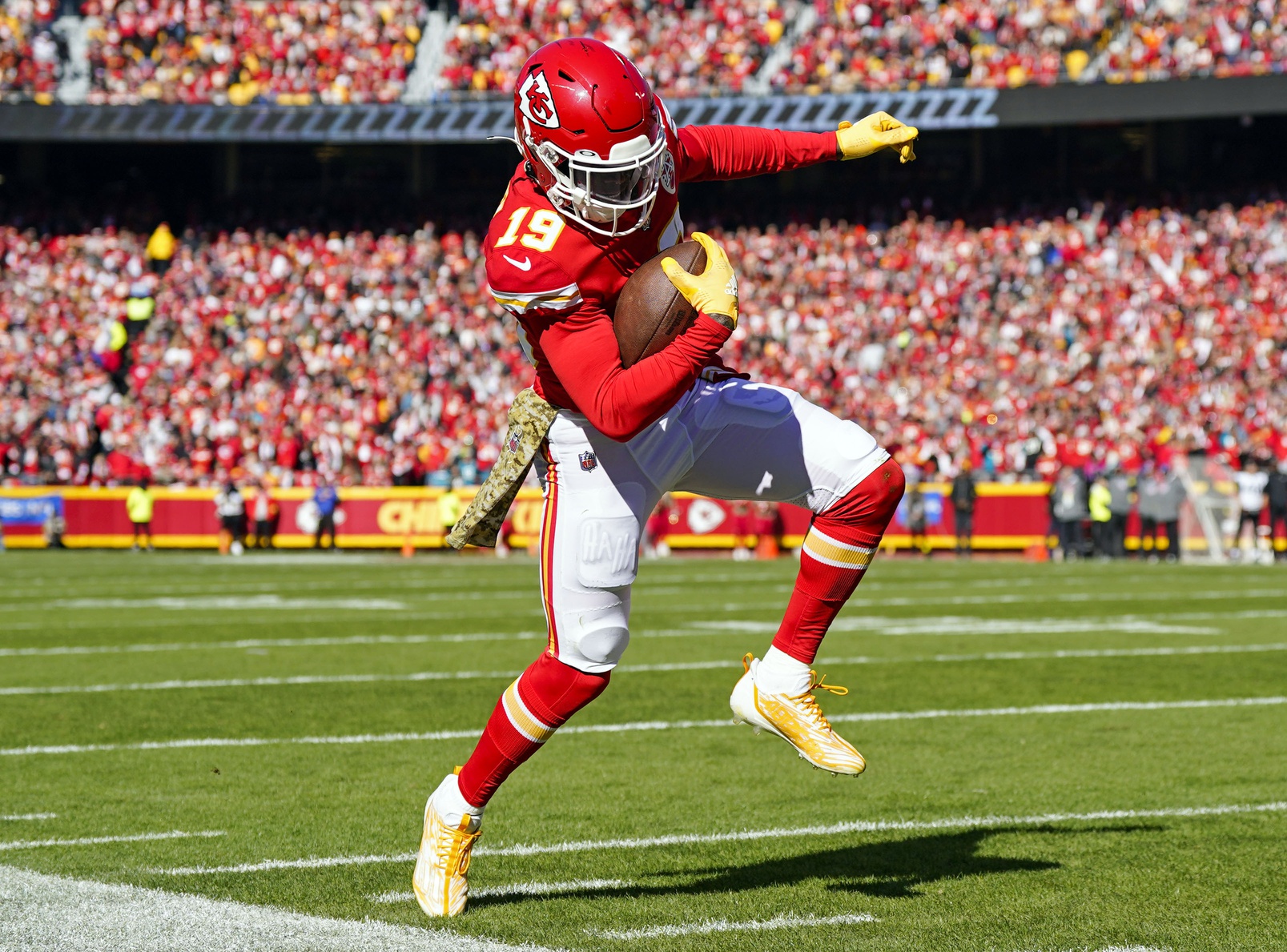 Why Chiefs Should Be Extremely Excited About Kadarius Toney

When the Kansas City Chiefs traded for second-year receiver Kadarius Toney ahead of the NFL trade deadline a couple of weeks ago, they were bringing in an exciting new pass-catching weapon with electrifying upside. Two games into his Chiefs tenure, Toney is already starting to live up to the expectations he’s always had as a first-round pick in the 2021 NFL Draft.

The spark that the young receiver could provide for an offense was apparent in his limited time with the New York Giants, the team that drafted him last year. With his extraordinary speed, quickness, and elusiveness, Toney always has had the ability to take over a game with the ball in his hands. Though he didn’t score a touchdown in his first year as a pro, his time with the Giants is highlighted by the 196 yards on 11 touches he put up in an unbelievable performance against the Dallas Cowboys in his fifth career game.

Though the rest of his rookie season was marred by a couple of stints on the injured reserve, all of the potential and upside New York saw when they drafted him was clear. What was also clear early on was that he didn’t fit into the vision of new head coach Brian Daboll and general manager Joe Schoen—the leaders of the Giants’ new regime.

Rumors about a potential Toney trade were swirling as early as this year’s NFL Scouting Combine in March, and it became a near-certain outcome when the team drafted rookie Wan’Dale Robinson, a receiver with a very similar skill set, in this year’s draft. A few months later, the Giants sent Toney to Kansas City, a team that was in need of a new dynamic playmaker in the wake of Tyreek Hill’s departure in a trade.

Two weeks later, the Chiefs are getting everything they hoped for from Toney when they made the trade. Just like the Giants did in his rookie season, Kansas City’s method for getting him involved is something along the lines of, “put the ball in his hands and let him work.” In other words, getting Toney some manufactured touches on shorter routes allows him to do what he does best: creating yards after the catch and making plays with the ball in his hands.

A glimpse of what Kadarius Toney brings to the KC offense 🔥

Kansas City is also utilizing Toney’s speed and dynamism to mess with opposing defenses and create more opportunities with pre-snap motion, much like they did with Hill. The receiver’s first touch of the game was a six-yard touchdown catch after a jet-sweep motion before the snap created some busted coverage, leaving him all alone on the opposite side of the field from the rest of the Chiefs’ receivers. When quarterback Patrick Mahomes got to his check-down read, he threw maybe the easiest touchdown pass of his life as the wide-open Toney bunny-hopped his way to the end zone.

Of course, the Chiefs also have used that pre-snap, jet-sweep motion to use Toney in, well, jet sweeps. On literally the very next touch for the receiver following his first career touchdown, he took off for 32 yards on a jet sweep that set up another Kansas City touchdown two plays later.

As electrifying as Toney is once he already has the ball, he’s also showing his new team what he brings as a playmaker before the catch. His change of direction ability and short-area quickness help make him a stellar route-runner who can create separation over the middle of the field. Against the Tennessee Titans in his Chiefs debut, Toney spun a linebacker out of his shoes for a nice gain.

Then, against the Jacksonville Jaguars this Sunday, Toney showed off his high-pointing skills on a fantastic sideline grab for a big gain that once again set up a Chiefs touchdown a couple of plays later. Manufactured touches are clearly not the only way Kansas City can get the ball in Toney’s hands. He’s a very skilled receiver that has the ability to create separation and get open before (and during) the catch as well.

Kadarius Toney got UP to make the catch 😱 @0fficialC2N

With fellow receivers JuJu Smith Schuster’s mid-game head injury and Mecole Hardman out with an abdominal injury, Toney started to get extra opportunities in his second game with the Chiefs. With how much Toney contributed on those extra touches, whether or not Smith-Schuster and Hardman are available in the weeks ahead likely won’t affect his target and snap counts.

Toney is a true playmaker and already has made the Chiefs’ offense look more dynamic through just a couple of games. His usage mirrors how Kansas City used Hill in years past, albeit in a small sample size and with less volume (…so far). But all of the upside and potential are there, and the Chiefs have to be extremely excited about what he can bring to the team for the next three and a half years.