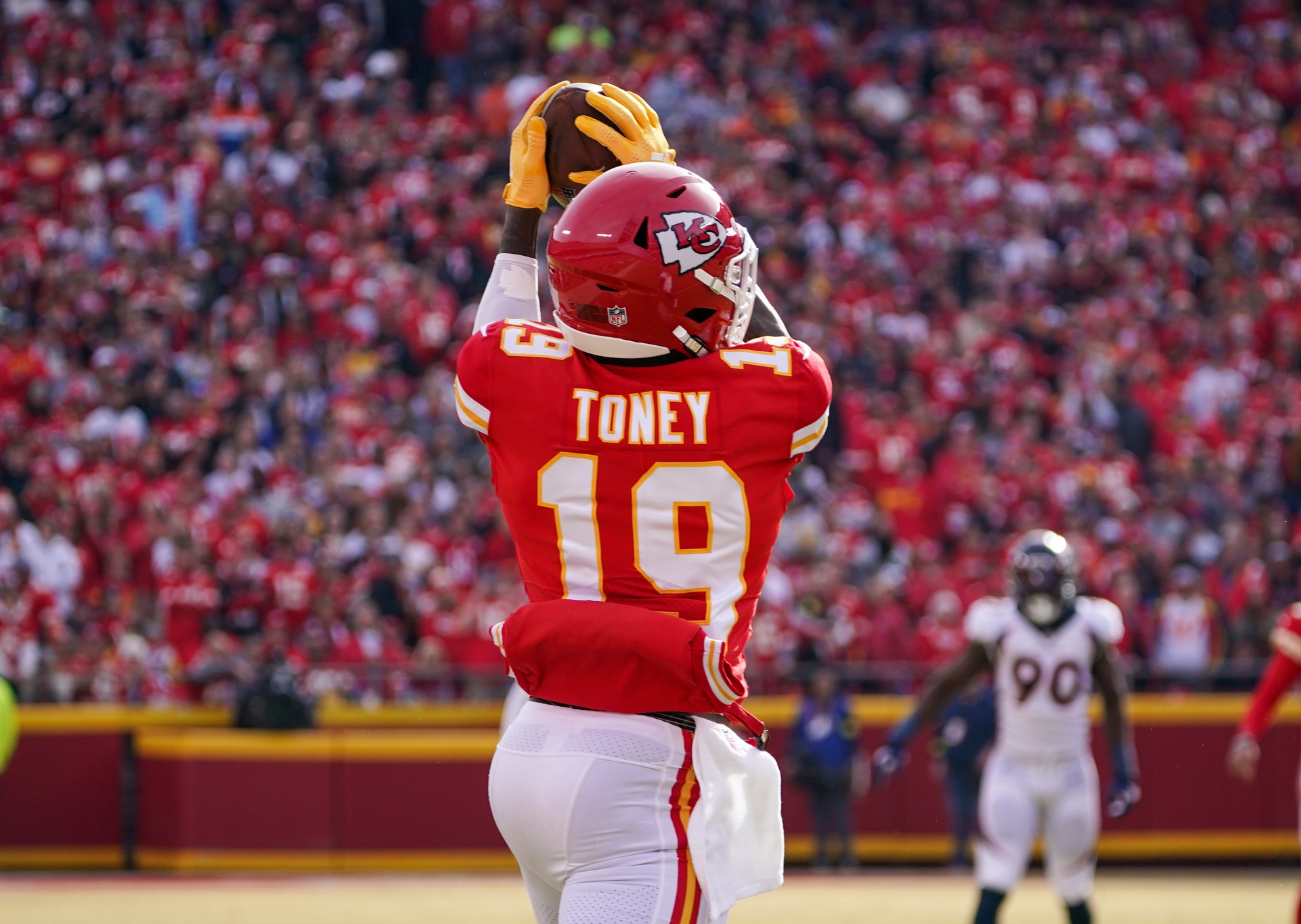 Kansas City Chiefs wide receiver Kadarius Toney was excellent in Sunday’s 27-24 victory over the Denver Broncos. Toney hauled in four receptions on four targets for a season-high 71 receiving yards and 17.8 yards per reception. Toney is finally carving out a role for himself in Kansas City.

The highlight of Toney’s day was an explosive 38-yard reception. Toney’s calling card to production has often arrived via manufactured touches on shorter routes. It was encouraging to witness Toney make a downfield play as he continues his ascension to becoming a more well-rounded receiver.

It wasn’t Toney’s lone game-changing reception. Chiefs quarterback Patrick Mahomes located Toney for a 27-yard gain on a crossing route. The Chiefs ran play-action before Mahomes made a gorgeous anticipatory throw to a streaking Toney.

Toney provided Mahomes and the Chiefs offense with a much-needed spark in Sunday’s win over the Broncos. Toney’s contributions were crucial throughout a contest that was closer than anyone expected it to be. Toney’s extraordinary speed, quickness, and elusiveness were routinely on display.

The Chiefs originally acquired Toney from the New York Giants in exchange for a 2023 third-round compensatory selection and a 2023 sixth-round pick in late October. Chiefs general manager Brett Veach added Toney to his team’s pass-catching corps near the NFL trade deadline. Acquiring Toney is beginning to pay dividends.

The Chiefs have utilized Toney in a variety of manners since acquiring him. Toney has lined up as a boundary receiver on 36 snaps, with an additional 24 snaps in the slot, according to Pro Football Focus. Chiefs head coach Andy Reid is moving Toney all around his offensive formations in search of advantageous mismatches.

Both of Toney’s receiving touchdowns this season occurred with the Chiefs. On the season, Toney is averaging a chain-moving 10.6 yards per reception. Quarterbacks have enjoyed a near-perfect passer rating of 143.4 when targeting Toney in coverage.

It’s worth acknowledging that Toney wasn’t perfect. The Broncos capitalized on Toney’s turnover by scoring a touchdown on their ensuing possession and taking a 10-6 lead. If Toney expects to be afforded additional opportunities, he’ll have to showcase better ball security moving forward.

Trading for Toney was a long-term play for the Chiefs. A first-round pick in the 2021 NFL Draft, Toney is signed through the 2024 campaign on a cost-effective, team-controlled rookie four-year contract. Toney is scheduled to earn a base salary of $1.9 million and $2.5 million in 2023 and 2024 respectively, per Spotrac. The Chiefs also possess a fifth-year option to extend Toney’s contract through 2025. That’s extremely valuable for a team with an expensive quarterback at the helm.

The 13-3 Chiefs are furiously heading for postseason success. It’s Super Bowl or bust in Kansas City. Toney is a difference-maker that could help his Chiefs achieve their lofty aspirations while providing a long-term, affordable solution at the position.