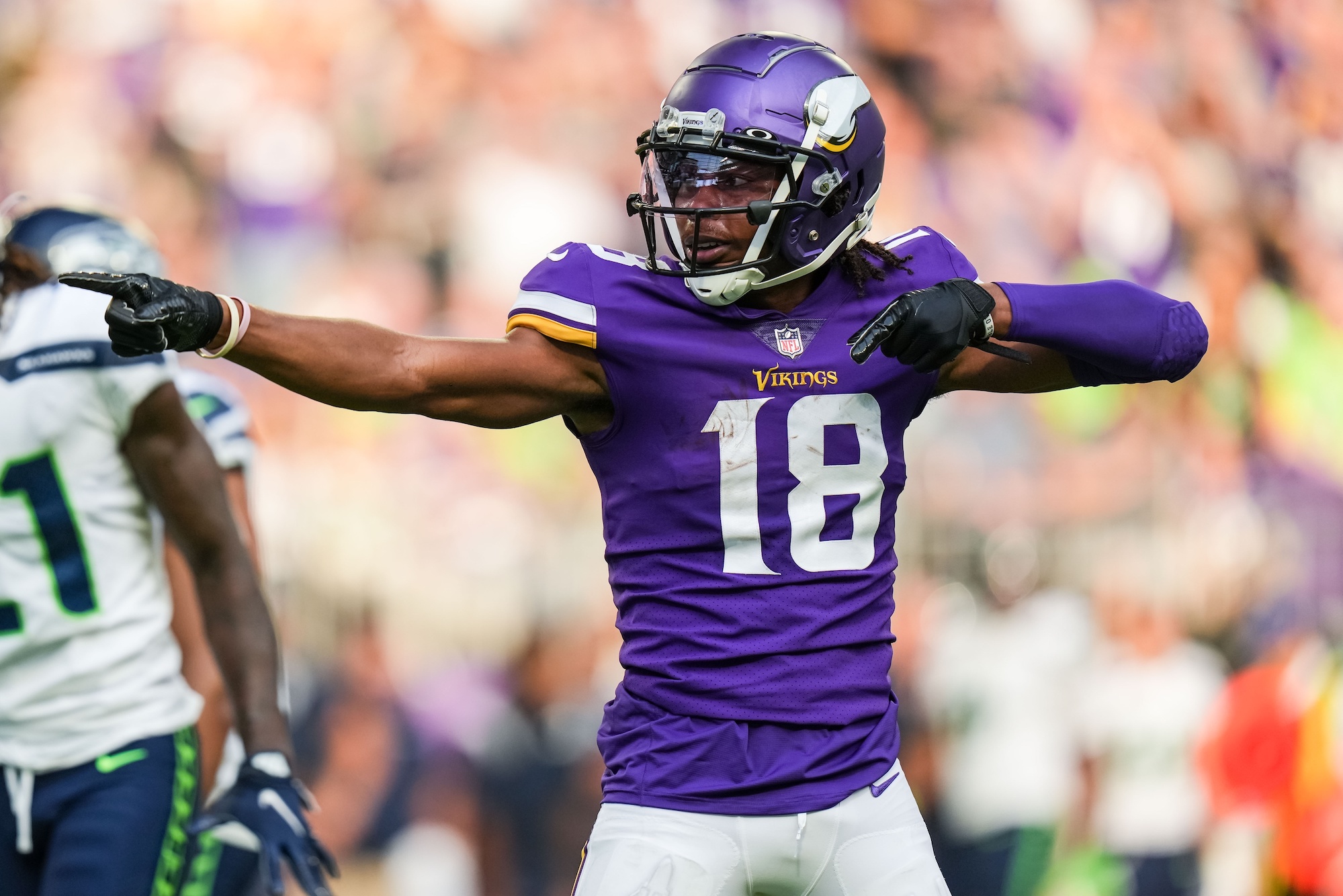 Cooper Kupp was an exception to the norm in 2021, reaching a milestone that remained elusive since 2005. As the target hog and do-it-all pass-catcher for the Super Bowl-winning Los Angeles Rams last fall, Kupp led all NFL wideouts in catches, receiving yards, and touchdowns. Winning the ‘triple crown’ isn’t an annually awarded accolade. It takes a remarkable campaign—herculean if you will. However, as we glance over the horizon and toward the oncoming 2022 season, one player stands out that could take the crown away from Kupp: Minnesota Vikings wide receiver Justin Jefferson.

Entering his third season, the NFL has been peaches and cream for one of football’s premier young pass-catchers. It’s been too easy. A blend of speed, hands, route-running, and run after the catch ability, there isn’t a box Jefferson doesn’t check as a game-changing talent on the perimeter.

A first-round selection in 2020, Jefferson has wasted no time placing his foot on the neck of opposing defensive coordinators’ gameplans, totaling more than 3,000 receiving yards in just 31 games played, or 91.4 yards per game—good for second all-time at his current pace. While the names surrounding him in Julio Jones (1st—91.9) and Calvin Johnson (3rd—86.1) each played a massive amount of more NFL snaps, there’s no reason to believe Jefferson has reached his performance ceiling at just 22 years old.

With Kirk Cousins back in town, he remains the hefty straw that stirs the Vikings. While many will argue it’s Dalvin Cook, it’s a fallacy, and it would suffice to say that Jefferson’s continued improvement could provide the stepping stool Minnesota needs if they plan on overtaking the Green Bay Packers in the NFC North this fall. In the grand scheme of things, it’s one player, yes, but as we’ve seen in the NFL, and within other professional sports leagues, all it takes is that one player to take you over the top in some cases. When it comes to a talent like Jefferson, who despite playing a position where his numbers directly correlate with another individual, he’s become as ‘go-to’ of a target as we’ve seen in recent memory.

No matter the down and distance, or the matchup, feeding Jefferson has become a weekly ‘to-do’. And as the old adage goes, “if it ain’t broke, don’t fix it” and Jefferson’s 292 targets in two seasons is a gaudy number that will only increase as his rapport grows with Cousins and the game—frighteningly—continually slows down to his tempo on the perimeter.

With new Vikings Head Coach Kevin O’Connell now calling the shots alongside Offensive Coordinator Wes Phillips (two former quarterbacks), the onus on the two newest Vikings hirings to pump their young superstar with targets will remain paramount if Minnesota hopes to punch its ticket to the postseason—frankly, it’s not coming from anywhere else. Adam Thielen is a nice WR2 and K.J. Osborn could enjoy a breakout year—more on that later this summer—but relying on Irv Smith Jr at tight end to holster targets looks out of the question. While 2021 fifth-rounder Ihmir Smith-Marsette flashed a few times last fall, the Vikings’ aerial onslaught relies heavily on Jefferson to consistently create separation and dominate opposing secondaries every single week.

The road to the triple crown won’t be easy—matchups against Jaire Alexander, Darius Slay, James Bradberry, and Marshon Lattimore await within the first month of the season. However, Justin Jefferson is just now beginning to scratch the surface of his true potential. For a one-of-one talent whose numbers remain on pace to shatter NFL record books, my advice to corners across the league: don’t blink.