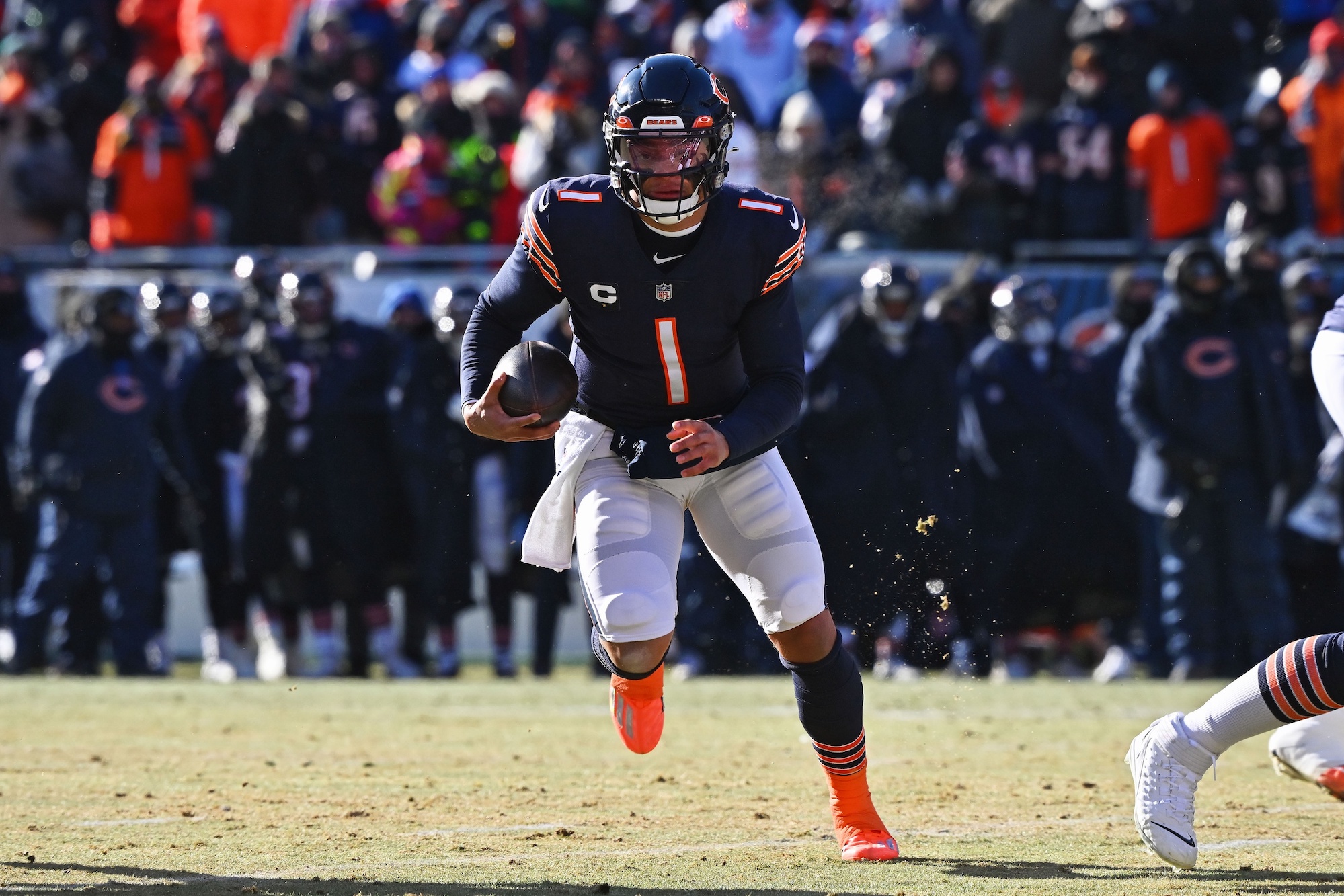 Should Justin Fields Play In Week 18?

Chicago Bears sophomore quarterback Justin Fields has a chance to make history in their meaningless Week 18 contest against the Minnesota Vikings. The dual-threat Fields has rushed for 1,143 yards and is a mere 64 yards away from Lamar Jackson’s single-season rushing record (1,206). The Bears should play Fields on Sunday, but head coach Matt Eberflus is mulling all options, including benching and resting Fields.

“Yeah, that’s important,” Eberflus said Monday in relation to Fields’ potential to set a new single-season NFL record. “It’s an important factor, but it’s not end-all, be-all. Certainly the health of our team is the most important thing.”

Eberflus’ tone indicates he’s mulling a difficult decision. Fields isn’t 100% healthy. Few NFL players experience optimal health by the time Week 18 arrives and Fields’ situation teeters on the extreme side. Fields has been sacked on 55 occasions behind an underwhelming offensive line. The former Ohio State product has been the subject of several bone-crushing collisions, both in the pocket and as a scrambler. Fields suffered a left shoulder injury earlier this season that sidelined him for a game.

Fields has been playing through that painful shoulder AC joint separation since mid-November. The 3-13 Bears could have placed Fields on season-ending IR long ago as they have been playing meaningless contests for a long time. Why shut Fields down now when he’s on the brink of achieving historical greatness?

Fields is almost guaranteed to shatter Jackson’s record if he starts against the Vikings. Fields is averaging 76.2 rushing yards per contest in 15 regular-season appearances. Since exploding as a rusher in an early November loss to the Miami Dolphins, that number has risen exponentially to 102.6 rushing yards per outing in Fields’ last seven games. Jackson’s single-season record is in legitimate danger should Fields suit up versus Minnesota.

There’s also the Bears’ draft positioning to consider. The Bears are entering Week 18 with the No. 2 overall selection in the 2023 NFL Draft. In-house scout Kyle Crabbs sent Alabama EDGE Will Anderson Jr. to the Bears in his latest NFL mock draft.

The Bears have already clinched a top-four selection, but receiving the No. 1 overall pick remains within the realm of possibility. A Bears defeat to the Vikings coupled with a Houston Texans victory over the Indianapolis Colts would award Bears general manager Ryan Poles with the top selection. Playing Fields versus Minnesota enhances the Bears’ chances of winning and sliding down to third or fourth overall.

Landing a high-end draft pick would strengthen Poles’ possibility of either drafting a defensive franchise cornerstone such as Anderson Jr. or Jalen Carter, or trading down for a king’s ransom. The rebuilding Bears could undoubtedly use extra draft capital to plug a plethora of roster holes. The Bears are also scheduled to enter the offseason with a league-high $119.3 million in cap space, according to Spotrac.

The Bears are playing for nothing, but Fields is playing for something. Fields has experienced a breakout sophomore campaign despite the Bears’ lack of team-based success. Fields’ long-term health and the impending offseason loom large, but Justin Fields deserves an opportunity to capture history.