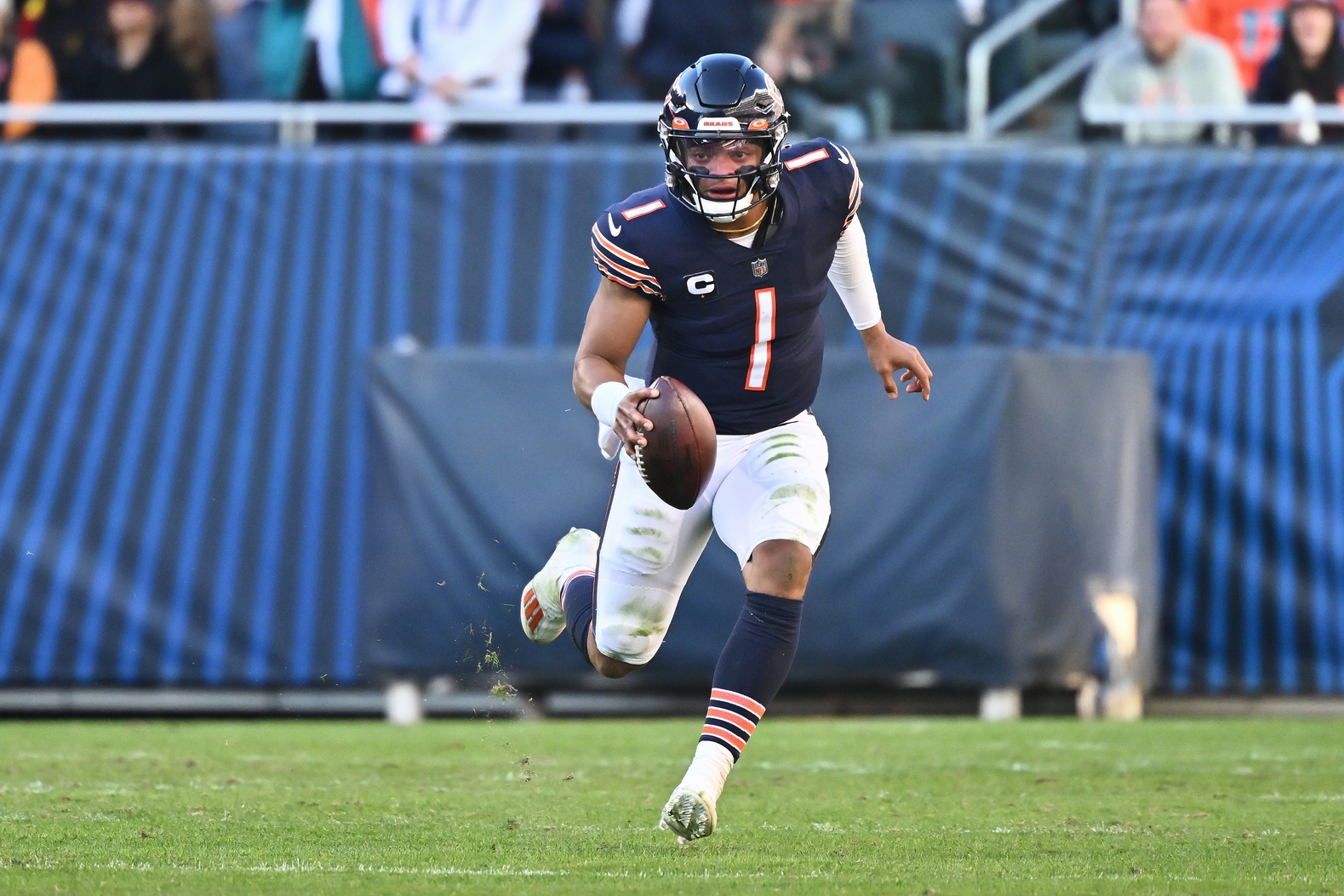 Chicago Bears franchise quarterback Justin Fields has turned into a rushing yards machine over the past few weeks. Through Chicago’s latest two contests, which were both hard-fought losses despite Chicago surpassing 30-plus points, Fields has rushed for a total of 325 yards and three touchdowns. Fields is currently in contention to break Lamar Jackson’s single-season rushing record of 1,206 yards. Will Fields make history?

As far-fetched as it sounds, Fields is actually on pace to break Jackson’s record. With 749 rushing yards through 10 contests, Fields is currently averaging 74.9 rushing yards per outing. That places the former Ohio State quarterback on pace to total 1,273.3 rushing yards throughout a 17-game campaign. It means Fields has approximately 67.3 yards in room to spare. It’s still difficult to envision Fields keeping at his current pace and breaking Jackson’s record. Recency bias has inflated Fields’ per-game rushing average.

Prior to Fields’ two-game rushing explosion, he was averaging a more modest 53 rushing yards per contest. That number has enjoyed a significant jump to the aforementioned 74.9 yards per outing following Weeks 9 and 10. Fields’ rushing totals may soon even out.

Playing devil’s advocate, it’s also worth acknowledging that Fields should continue running the football with more volume. The Bears’ coaching staff (more so Fields) have clearly unlocked some new-found offensive success via Fields’ dangerous legs. The Bears were averaging under 20 points per contest throughout their first eight games. A shift in offensive strategy that’s allowing Fields the freedom to utilize his athletic ability with more consistency has them scoring a season-high weekly average of 31 points in their last two games. Fields should be coached and encouraged to utilize his legs.

It remains difficult to bet on the outlier occurring—make no mistake, Fields’ recent rushing outputs are an outlier. Prior to his 178 and 147 rushing-yard performances in back-to-back weeks, Fields’ season-high in rushing yards was 88. Fields managed to double that total (178) in Chicago’s thrilling 35-32 loss to Miami in Week 9.

What further hinders Fields’ chances of shattering Jackson’s record is the explosive plays he’s created as of late. Fields rushed for 67 and 61-yard touchdowns in back-to-back showings. Prior to those highlight-reel-worthy rushes, Fields’ season-long rush went for 39 yards. Expecting Fields to continue rounding off 60-plus-yard scrambles as a weekly occurrence qualifies as improbable.

Even when analyzing Fields’ rookie campaign, his longest rush of the 2021 season went for a modest 23 yards. Fields enjoyed just one 100-rushing yard contest as a first-year scrambler. He’s flashed considerable growth as a sophomore, but it adds context to his overall rushing prowess.

Jackson’s record-setting 2019 campaign was truly special. The former Louisville product appeared in 15 regular-season contests. The NFL was still playing a 16-game season then, and Jackson rested in Baltimore’s regular-season finale because the Ravens had already clinched the No. 1 seed and home-field advantage throughout the postseason. Jackson averaged 80.4 rushing yards per game, which is six more yards per contest than Fields’ current average, and nearly 30 (27.4) more yards per game than Fields’ average (53) before his last two showings.

Jackson’s rushing consistency throughout that season is something to behold. He enjoyed just five showings of 100-plus rushing yards. Jackson rushed for 40-plus yards, but less than 100 yards, in additional nine contests. The Ravens went 14-2 and Jackson rightfully claimed Most Valuable Player honors. Imagine what Jackson would have totaled if he benefited from a 17-game showing like Justin Fields may. It wouldn’t even warrant a conversation.

Justin Fields’ latest rushing performances are legitimately rare and eye-opening. Chicago’s second-year quarterback is developing into a high-end rusher right before our eyes. Sit back and enjoy, Bears faithful. Jackson’s historic 2019 campaign remains the GOAT of single-season rushing outputs by a signal-caller, however. That will remain the case at the conclusion of the 2022 season.