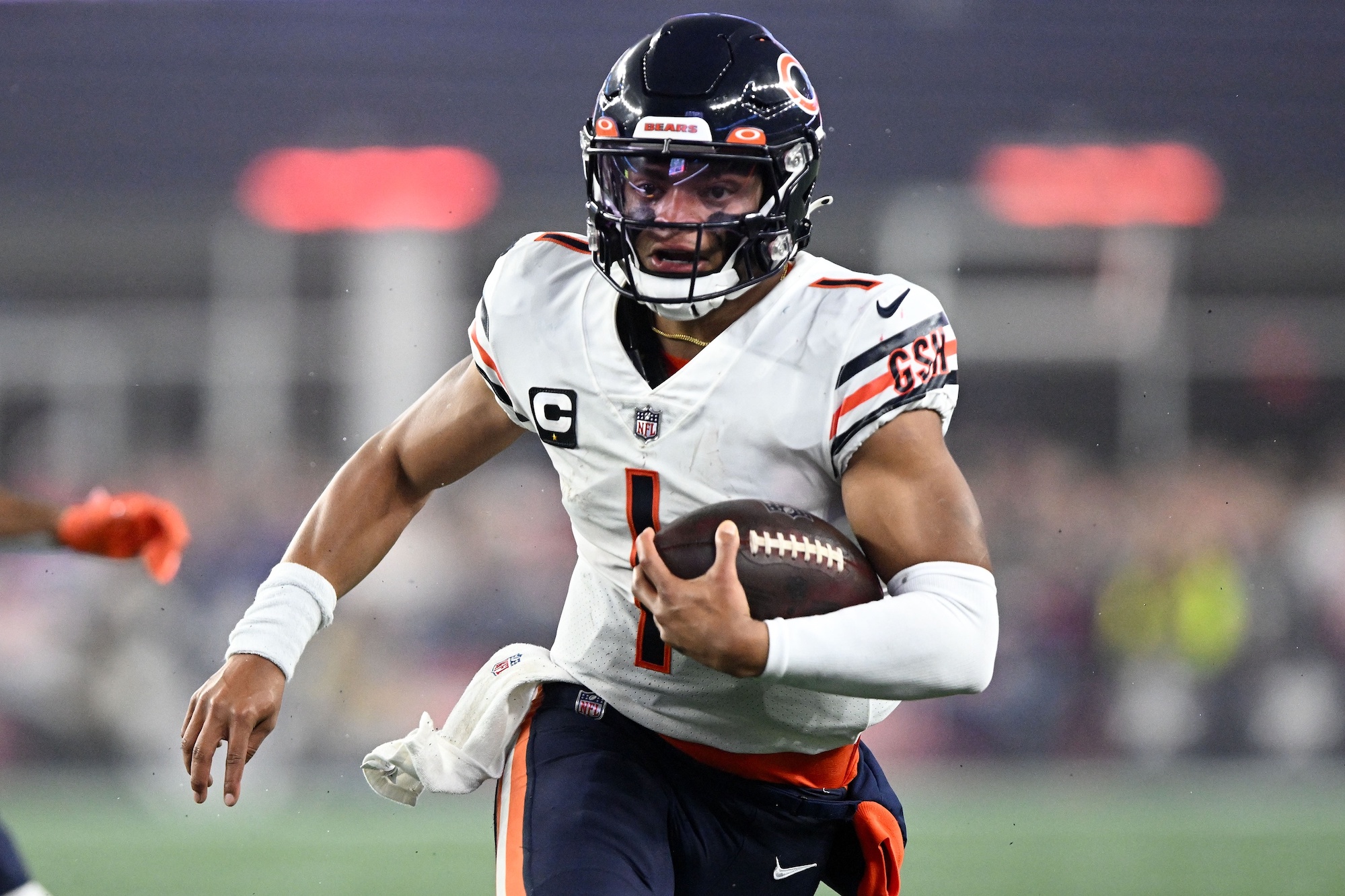 The Chicago Bears’ Week 7 upset over the New England Patriots on Monday Night Football may have meant more than a run-of-the-mill win. After a year-and-a-half with quarterback Justin Fields under center, the Bears may have finally found an offensive identity with him as their quarterback. For the first time all year, they ran Fields. And it worked.

The Bears’ offense has differed from every offense in the NFL this season in their inability and unwillingness to throw the football. Chicago’s passing offense ranks last in the NFL in yards per game and pass attempts. Despite the fact that they drop back to pass less than any team in the NFL, they take sacks more than any team in the league, as their quarterbacks have taken a league-high 27 sacks on the season. To make matters worse, their low volume of passing plays does not come with high efficiency; they complete a league-worst 55.9% of their passes.

A number of factors have contributed to Chicago’s approach and ineptitude, but the team’s personnel on offense can at least lend insight into why the team is not inclined to throw, and why it hasn’t found much success when doing so. Chicago lacks talent at the wide receiver position outside of Darnell Mooney, while Cole Kmet has shown little to indicate that he will be anything more than an above-average tight end at the NFL level since being a high second-round pick in 2020. The Bears’ best skill position players are running backs David Montgomery and Khalil Herbert. Their offensive line does not lend itself to having a successful dropback passing game on a consistent basis, as their pressure rate allowed heading into Monday night’s game against New England of 46% was the highest since ESPN began tracking the stat in 2009.

Despite their inability to throw the football, using Fields’ legs in the quarterback run game remained somewhat of an afterthought for Chicago’s offense before the New England game. Going into Monday night, the Bears had called 12 designed quarterback run plays for Fields this season in six games. In the game against the Patriots, they called 10. Fields ran 14 times, 10 on those designed runs and four scrambles, for 82 yards and one touchdown. He flashed much of the athletic potential that made him such an appealing dual-threat prospect at Ohio State.

The results spoke for themselves on Monday night. Chicago’s 33 points represent the most points the team has scored in the Fields era and marks only the second time the team has cracked 30 points since last season.

Why Chicago did not pivot to this approach with Fields earlier in the season, or simply open the season with the intention of using Fields as a runner, is a mystery. With few options in the passing game, a weak offensive line, and an athletic phenom at quarterback, it would theoretically behoove an offensive coaching staff to build the offense around the quarterback’s legs. The fact that they did not do so screams “fitting a round peg into a square hole.”

In any case, the Bears used their mini-bye coming off of their Thursday night loss to the Washington Commanders to their advantage. As head coach Matt Eberflus said, via the Bears’ website, “some things we needed to tweak a little bit; no big changes but some things to enhance our player skill sets, and I thought we did a good job with that.” Featuring Fields in the run game stood out as an example of enhancing a player’s skillset, and it should continue moving forward.

The Bears will not get a full evaluation of Fields as a passer this year due to his supporting cast. His receiving options are bereft of talent and the offensive line has some promising pieces (Teven Jenkins, Braxton Jones) to go along with Cody Whitehair (currently injured), but it is far from complete. Chicago will hope to get a full and fair evaluation of Fields next year, after upgrading its talent-deficient offense with a high draft pick and having more than $100 million in cap space to work with.

The Bears can get an evaluation of Fields and what an offense built around his strengths would look like, by using him as a runner. In doing so they will also likely field (no pun intended) a more competent offense for this season. On Monday night, for the first time this season, the Bears took a step in that direction. So far, so good.