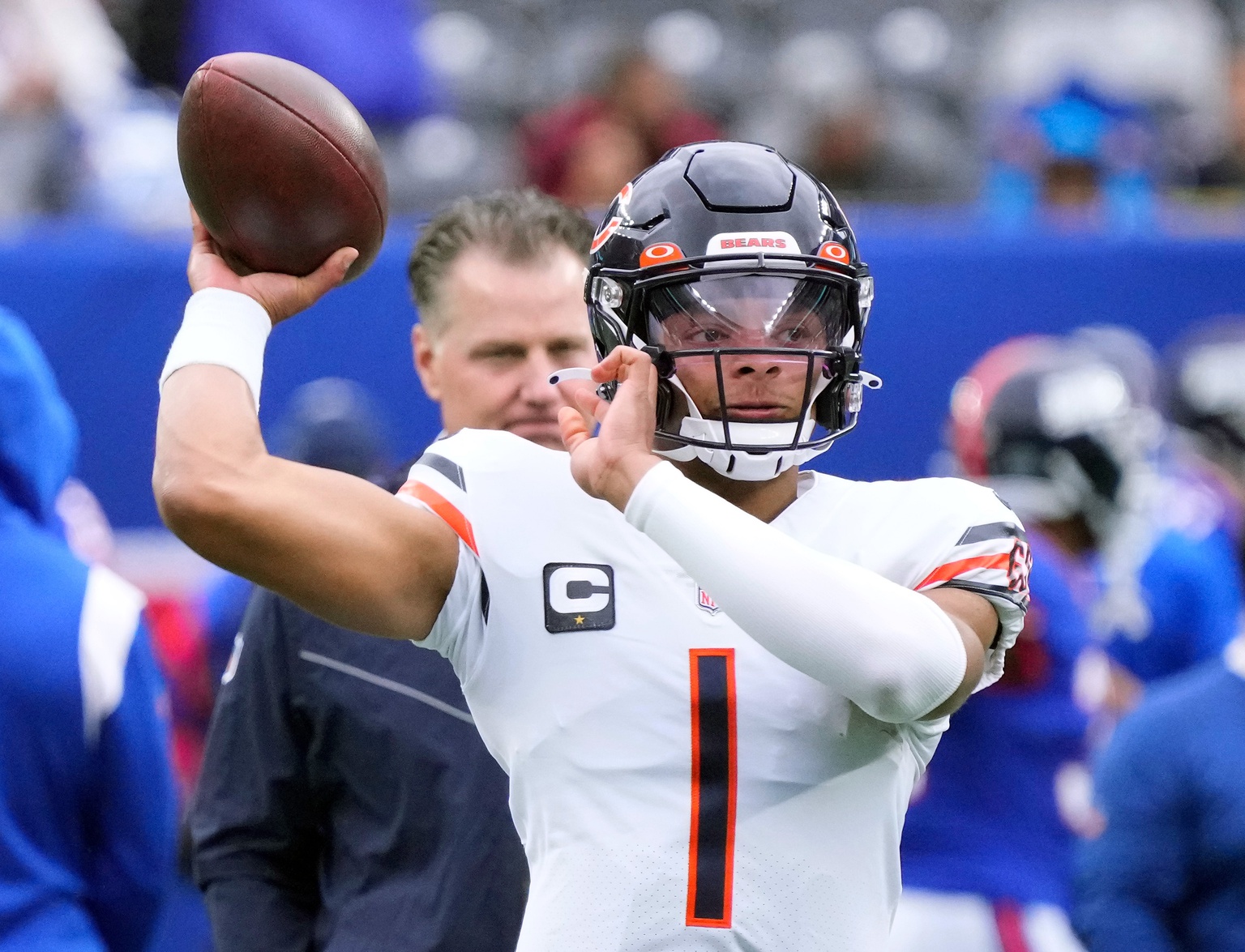 The Chicago Bears are a team in transition that is currently rebuilding in year one of general manager Ryan Poles and head coach Matt Eberflus’ leadership. Expectations are low because the team doesn’t have the top-end talent or depth to truly compete, which is generally understood. The timing of this rebuild aligns very poorly with the development of quarterback Justin Fields, however.

Fields is in his second season after the Bears parted with two first-round selections to make him the quarterback of the future. Simply put, the Bears don’t have the talent around Fields to give him his best chance to succeed, not to mention a new coaching staff that doesn’t allow for continuity year over year for him. Those dynamics have tempered expectations for growth from Fields in 2022 and put Chicago in an unenviable spot of not gaining much clarity on the young quarterback until his third season, assuming the Bears can make significant upgrades around him next offseason.

While there was plenty to be concerned about regarding the infrastructure surrounding Fields entering the season, watching the Bears through the first four games in 2022 has revealed an alarming approach to offensive football that is holding Fields back even more.

Given the bottom-tier roster in Chicago, a conservative style of play was expected. With a defensive-minded coach in Eberflus, the Bears have embraced a commitment to running the football and attempting to play sound defense to keep games close. And to Eberflus’ credit, Chicago has a 2-2 record, exceeding the expectations of many.

With that said, the Bears’ commitment to running the football has gone to an extreme level and it’s to the detriment of Fields’ development.

Pass rate over expectation leaders through Week 3 (MNF pending):
*The #Dolphins are letting Tua cook
*You can tell the #Ravens are struggling to run (outside of Lamar) based on how much they're passing
*Do the #Bears know that the forward pass is legal? pic.twitter.com/5gx0lB4Uqu

Through four games, Fields has attempted a total of 67 passes. For context, 25 quarterbacks have completed at least 67 passes. Fields has 34 completions and 471 passing yards in four games started. The lack of passing opportunity and production is unprecedented in this era of football. Chicago is dead last in the NFL with a pass rate of 33%, a full 10% lower than the next closest team. 25 of 32 NFL teams pass the ball more than 50% of the time while every team except the Bears is 43% or higher.

With so few passing opportunities available, Fields is put in a tough position because he surely wants to make the most of his limited chances. The numbers tell the story here. Fields currently has the slowest trigger in the NFL with an average time to throw of 3.40 seconds. He also is fifth highest in average depth of target at 9.9 yards. Fields is also fifth in the NFL in the percentage of passes targeted at least 20 yards down the field at 19.4%.

In limited passing opportunities, Fields is holding the football and looking for shots down the field. There is no efficiency in the approach.

I recently spoke with a quarterback trainer who has several NFL clients and coaches college prospects while in school and through the draft process, in addition to professional quarterbacks. He recently coached a college prospect that had a major breakout season and when I asked him about the big step forward, he attributed much of that to a stylistic change where the offense played more wide open with a bigger emphasis on passing the football. He discussed how the limited passing attempts in previous years put too much stress on maximizing them and it led to poor decisions and chasing big plays. I can’t help but think of Fields’ current situation and apply that logic with him knowing he’s going to get roughly 15 passing attempts per game.

The Bears’ emphasis on running the football has also led to a high degree of predictability with the offense. Smart offenses understand that there is a cadence to play-calling that keeps defenses on their toes with tendency breakers and throws when the defense is thinking run and vice versa. With a 67% run rate, that isn’t happening in Chicago and throwing primarily in obvious passing situations doesn’t lead to great looks for Fields. Combine that with an underwhelming arsenal of weapons and the lack of a true go-to guy that can be trusted to get open and catch the football with consistency, and life is even more difficult for Fields when dropping back.

How often teams are expected to pass the ball based on situation (eg trailing, leading) versus how often they actually do.

The Bears' offense continues to break my brain pic.twitter.com/XuvwEiSHNN

The Bears are playing a different game than every other team in the NFL. Chicago must start throwing the ball more on early downs. They must use the passing game as an extension of the run game. They must incorporate more manufactured throws and allow Fields to find a rhythm. There is so much meat left on the bone for what Chicago’s passing offense can be, despite not having ideal personnel, especially in this era of football where it has never been easier to produce through the air.

When considering the Bears’ most recent game against the New York Giants, Chicago’s best two passing plays came on first down. After the Giants went up 7-3 in the first quarter, the Bears took possession of the ball at their own 19-yard line. On 1st-and-10, Chicago dialed up a play-action pass where Fields delivered a 51-yard strike to Darnell Mooney on a vertical route.

On the first play from scrimmage in the second half, Chicago took possession at its own 25-yard line. On 1st-and-10, Chicago ran a play-action boot where Fields found Trevon Wesco for a 23-yard pickup. A whopping 43% of Fields’ passing yards for the game came on two plays where Chicago opted to break their own tendency and throw the ball on first down.

Fields has been dealt a tough hand in Chicago, but there are common sense changes in philosophy that the Bears can make to create a better situation for him to produce and for the team to evaluate what they have in him. That starts with a more open-minded approach to incorporating the passing game and designing a game plan that makes life easier for Fields.